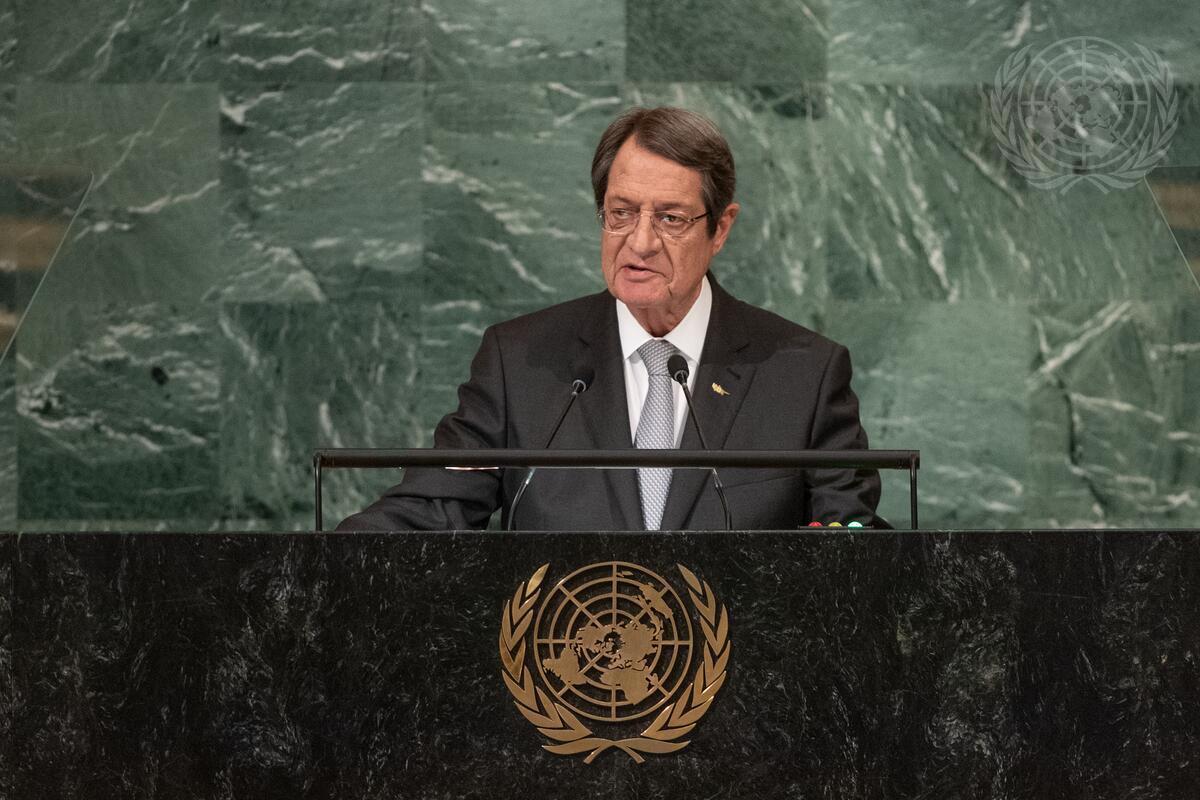 NICOS ANASTASIADES, President of Cyprus, decried the “dismal lack of effectiveness” of the United Nations.  If, in fact the Organization had been able to implement its decisions and resolutions, threats to the sovereignty to Member States, long-standing unresolved conflicts, the number of refugees from conflict or poverty, the challenges to the Sustainable Development Goals’ and devastating climate change could have been addressed.  Describing his address as “outside the bounds of diplomatic etiquette”, he stressed the need to speak plainly about the factors leading to the Organization’s loss of credibility.  Some of those factors include how international law is preceded by financial or other interests of powerful Member States, cold war-era alliances and resurgence of some States’ aspirations of empire-building, as well as a lack of consequences when resolutions are violated.  These problems not only embolden offending States, but also create “new precedents outside the framework of legality”, he said.

He went on to propose that the root causes that lead to unnecessary rivalries and conflicts be identified.  The called-for reform to modernize the United Nations into an efficient multilateral governance system is all the more urgent in light of the imminent new world war, following the Russian Federation’s illegal invasion of Ukraine.  Further, he spotlighted the division that continues today in Cyprus following the Turkish invasion in 1974, referring specifically to Türkiye President Recep Tayyip Erdoğan’s refusal to implement or respect numerous General Assembly and Security Council resolutions.  Detailing those texts, he said the documents describe Cyprus as a single sovereignty nation with two communities and zones.  Instead, President Erdoğan has chosen to insist that there are two distinct States and two distinct peoples on the island today.

He pointed out that 37 per cent of the territory of Cyprus, a European Union member State, remains under military occupation.  As well, after the Turkish invasion in 1974, Greek Cypriots were displaced by “implanted” Turkish nationals.  Thus, Türkiye established an illegal entity in Cyprus and violated the relevant resolutions.  He also stressed that Ankara adopted an arbitrary interpretation of international law that reduced the Exclusive Economic Zone of Cyprus by 44 per cent.  This was to the detriment of Greek and Turkish Cypriots and the United Nations Convention on the Law of the Sea.  When resolutions and decisions of international law are neither implemented nor enforced, it allows for such violations to continue — even “rewarding” the offending States.

Despite compromises by the Greek Cypriot side, all efforts on reaching a settlement failed as a result of the intransigent stance and irrational demands of Türkiye, he stressed.  He recalled a productive conference at Crans-Montana in 2017 where the two sides had essentially solved the key issue of effective participation.  However, Türkiye restarted negotiations at a Geneva meeting in 2021 where another agreement, this time to appoint an Envoy, was not upheld.  Giving an overview of the continuous negotiations on the matter, he spotlighted the letter sent to the Turkish Cypriot leader in May conveying constructive proposals for the adoption of win-win confidence-building measures.  Those measures were immediately rejected by the Turkish Cypriot side, which, in turn, submitted counterproposals in line with their aim for a two-State solution.

Reflecting on his decade-long presidency, he emphasized that the only way forward in resolving conflicts and for peace to prevail is none other than the unwavering adherence to international law and the Charter of the United Nations, not as arbitrarily interpreted by those who seek to disguise their revisionist aspirations.  Though he was not able to witness a united Cyprus with Greek and Turkish Cypriots living in peace and stability during his tenure, he expressed hope that he will see a better and more stable future for humanity in his lifetime.