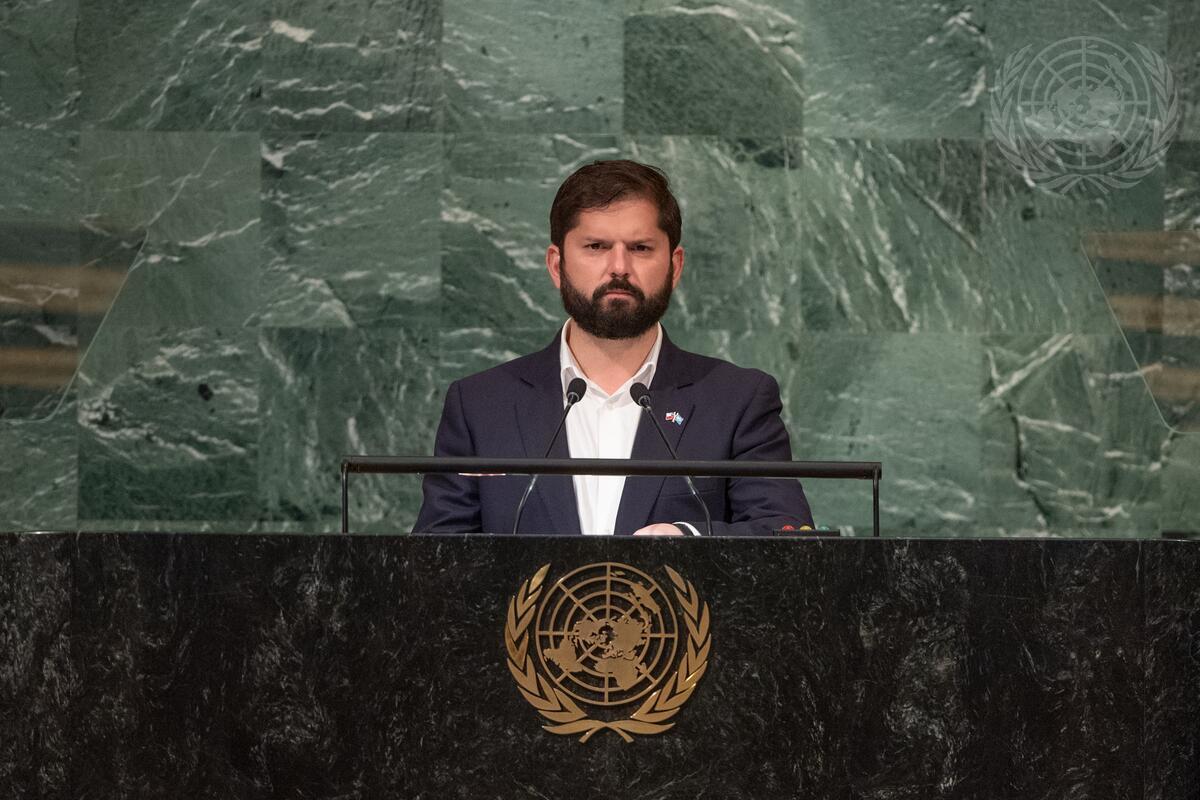 GABRIEL BORIC FONT, President of Chile, underscored that the world was in an era of uncertainly, where no country was isolated or immune to global shocks of events.  “Chile needs the world, and the world needs Chile, too,” he said.  He went on to express his solidarity and respect with Ukraine, pointing out that the Russian Federation’s unfair war of aggression on Ukraine pushed up prices and caused shortages of grains and fertilizers.

This, in turn, strongly impacted the Chilean economy, which has already been affected by the United States-China trade war in 2018 and the COVID-19 pandemic destabilizing the global economy, he noted.  The humanitarian crisis in Venezuela also generated an unprecedented migratory flow in the region and in Chile, putting tremendous presume on its society and institutions.  Further, despite being responsible only for 0.24 per cent of global greenhouse gas emissions, Chile meets seven out of nine United Nations vulnerability criteria.  “No country, large or small can save itself on its own,” he stressed.

Notwithstanding important political and social changes introduced by former President Salvador Allende 50 years ago, the Chilean development model has kept the high concentration of wealth, making it the most unequal country in the world, he continued.  Inequality has obstructed the country’s path of development, constituting an inherent threat to democracy.  The way forward in a peaceful democratic process resulted in an agreement between major political forces and a new road map for drafting a new constitution.

Chilean citizens — 80 per cent of voters — called for a new constitution through a plebiscite in October 2019, he reported.  This major challenge would something never before achieved in Chilean history — a democratic constitution, written with the participation of citizens, indigenous people and gender parity — a “constitution for everybody written by everybody”.  The work of the Constitutional Convention was submitted to public consultation and consequently rejected, with 85 per cent of voters participating and casting a vote of 62 per cent against and 38 per cent in favour.  Thus, the Government had to seek new formulas.  However, “a Government can never feel defeated when the people speak,” he stated.  Today Chileans have agreed to face their challenges by building a democracy that talks and listens to its citizens.

Member States have a duty of improving democracy, he said.  The Chilean people have demonstrated a lesson in democracy by calling the political actors to rise to the current challenges; their expectations must be met.  In that regard, the Chilean Government has received the results of the plebiscite “with the open mind and hearts”, willing to hear that the people are telling and trusting their will.  He expressed hope that Chile will soon have a new constitution built in democracy that brings together the contributions of all sectors of society and reflects aspirations in justice and liberty.  To that end, he called for the General Assembly to work together to strengthen democracy in all spaces, expressing the need for “a new Latin America” and modernization of the United Nations.