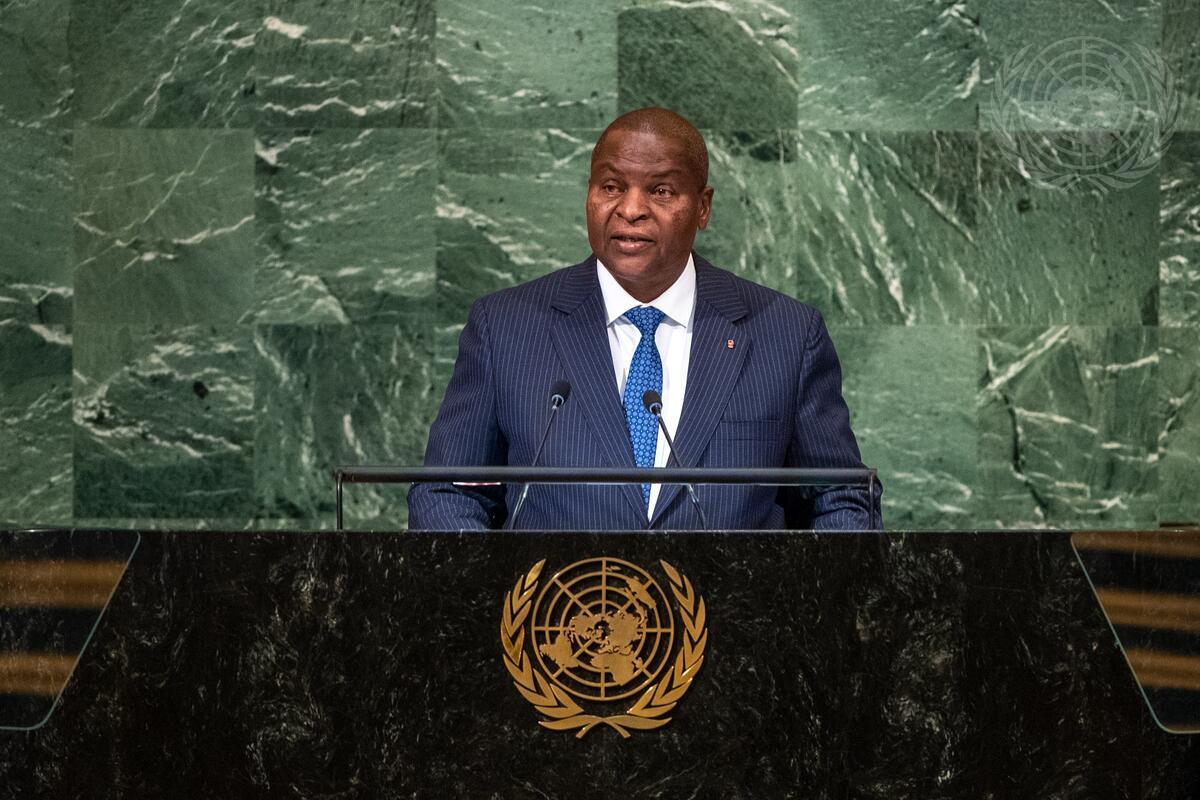 FAUSTIN-ARCHANGE TOUADÉRA, President of the Central African Republic, expressing serious concerns for the future of humanity, said global security, peace, the environment and global health are entering into a critical phase while warning signs are being ignored in favour of economic geopolitical and geostrategic interests.  Describing the United Nations as a product of a bygone era in a context of numerous global crises, he reiterated his Government’s support for the African Union position calling for profound reform of the United Nations and an increase of permanent seats in the Security Council which would achieve a fairer representation of all continents.

Citing the theme of the current General Assembly session, “transformative solutions to interlocking challenges” he called for the world’s biggest polluters to honour their commitments to the Paris Agreement and international solidarity for climate justice for the most vulnerable. Commending both the unprecedented solidarity that accompanied COVID-19 in global public health as well as the Health and Emergency Preparedness initiative implemented by the World Health Organization (WHO).  He described with pride the successful vaccination campaigns in the Central African Republic that have led to its polio-free status, as well as a 50 per cent vaccination rate for COVID-19 that show tangible improvement in its ability to manage epidemics.

However, the Central African Republic’s development has been slowed by serious security and health crises in recent years, exacerbated by the persistent lack of international financial support which has interrupted both agriculture and mining, he said.  He reminded the Assembly that though it is a fragile State with food insecurity and a lack of material and human resources, his country continues to sacrifice to improve its macroeconomic management and fiscal governance.  He expected the reestablishment of the Extended Credit Facility programme, which was suspended by the IMF.  He outlines further challenges the country faces which could be remedied through regional and international mechanisms.  Among them, he cited development of transport, energy, water, education and healthcare infrastructure with financing through public-private partnerships; accessing capital markets; trade development with other regions; supporting the education system through teacher training and the establishment of vocational training centres; developing a resilient economy capable of withstanding internal and external shocks through diversification and new technologies; and the promotion of intelligent solutions and approaches to climate change adapted to the country’s needs.

He went on to say that the Central African Republic is the first country in Africa to adopt Bitcoin as a digital currency and the first in the world to pass a law governing cryptocurrencies, which has enormous potential to reposition the economy.  He described his Government’s measures to fight against impunity, the implementation of the 2019 Political Agreement for Peace and Reconciliation and the Luanda Joint Roadmap, which have helped improve the sociopolitical climate. Upholding its international commitments, the Central African Republic has abolished the death penalty and adopted an anti-human trafficking law as well as a child protection code.

He noted specifically the Security Council’s firm condemnation in resolution 2648 (2022) of the attacks perpetrated against civilian populations by armed groups as well as the Council’s position against transitional trafficking networks that continue to supply groups with arms.  Thanking the “friendly and fraternal countries” that supported the request to lift the embargo, he also deplored manoeuvres aimed at legitimizing armed groups.  Central African youth are a reserve of elites just waiting for peace and security to develop in their country.  He denounced campaigns of disinformation and manipulation “led by certain international media against a backdrop of neo-colonialism” that discredit the country’s democratic institutions.  He called for a relationship of trust and mutual respect and reiterated his Government’s readiness to cooperate with all countries, provided its interests and sovereignty are respected.