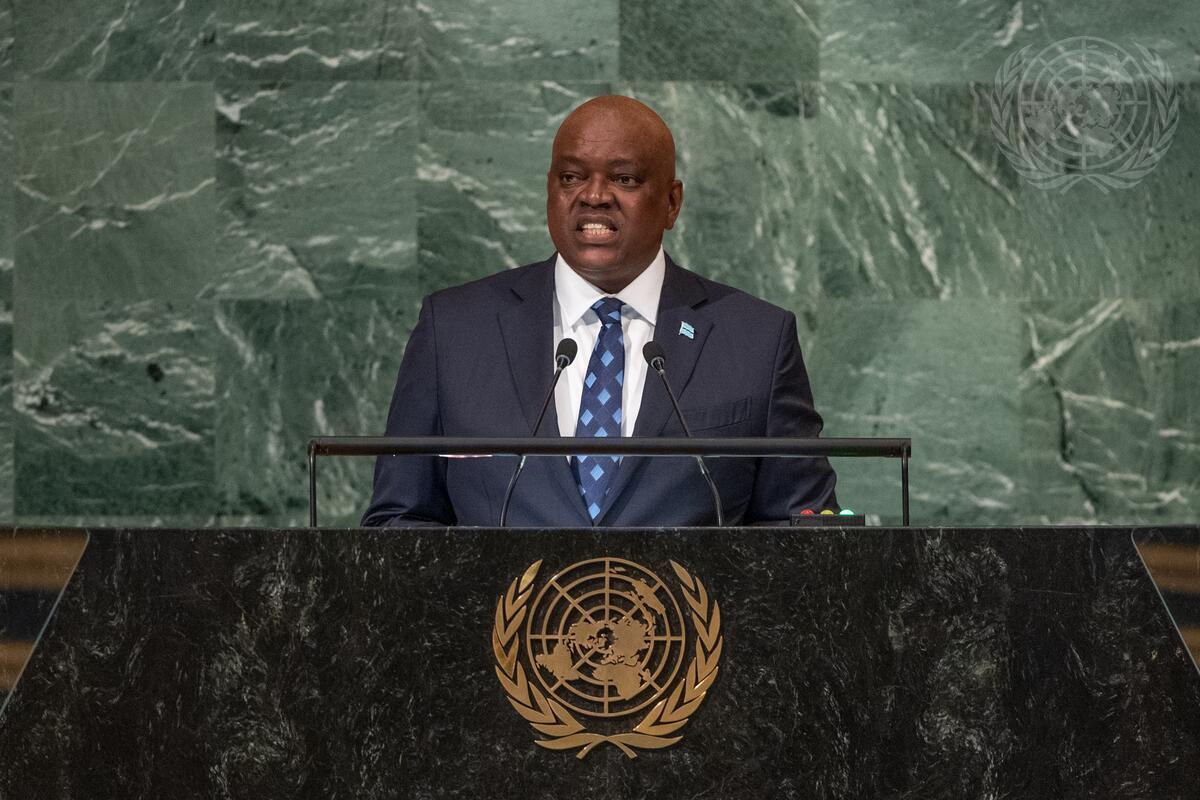 MOKGWEETSI ERIC KEABETSWE MASISI, President of Botswana, said Member States should look no further for solutions to global challenges than to already existing key multilateral frameworks.  Among them are the 2030 Agenda for Sustainable Development and the Sustainable Development Goals therein, the Paris Agreement and the United Nations Universal Declaration of Human Rights, as well as the outcomes of the Organization’s major meetings.  Botswana is an upper-middle-income country, he said, adding that it is proud of this status given that when it attained its independence only 56 years ago it was among the poorest in the world.  It was fortunate to discover what has turned out to be the largest diamond reserve across the Kimberley Belt.  Noting that his country turned its discovery of diamonds into a story of development, he said:  “Botswana would not have been able to realize its development had it not held onto its belief in the principles of democracy centred on the rule of law, good governance and the protection and enjoyment of basic human rights by its people.”

However, Botswana is facing an uphill battle to attract investors to diversify its economy away from a dependence on diamonds, he said, pointing out that that resource is still the bedrock of its economy.  He voiced support for the Secretary-General’s call for a world in which power, wealth and opportunity were shared more broadly and fairly at the international level.  His country advocates for the Kimberley Process, he said, highlighting that:  “Botswana’s story is unquestionable proof and living testimony that diamonds with good governance are for development.”  Diamonds are a serious matter of livelihoods, he added, noting that later today his delegation is hosting a side event on diamonds for development.  It aims to further broaden conversations with partners including the United Nations, Governments, civil society and the private sector, to ensure that Botswana would also be part of the United Nations family espoused around shared power, wealth and opportunity as it endeavours to realize the 2030 Agenda.

Many countries in the Global South, especially in Africa, have not met the World Health Organization’s (WHO) 70 per cent vaccination rate by mid-2022, he pointed out, stressing the urgent need for vaccine equity.  Vaccine hesitancy must also be addressed by countering misinformation and raising awareness of the science, safety and effectiveness of vaccines.  As his country has procured enough vaccines to administer to all eligible groups, 60 per cent of its population is now fully vaccinated.  Moreover, his Government has approved the manufacturing of the patent-free COVID-19 vaccine Corbevax.  Noting that construction of a vaccine manufacturing plant has already commenced, he said the facility would produce cancer treatment and next-generation cell-based immunotherapy.  The initiative is being undertaken in partnership with NantWorks, the Texas Children’s Hospital Center for Vaccine Development and the Baylor College of Medicine, he said, noting that the partnership will enhance Botswana’s capacity in human vaccine production, contribute to its goal of building a knowledge-based economy and help in preparation for future pandemics.

He went on to say that Botswana’s recovery plan includes strengthening its protection system to ensure the inclusion of vulnerable groups and persons living with disabilities.  As adequate financing is needed to achieve sustainable development, the effective mobilization of domestic and international financial resources, as well as their prudent use, are imperative.  He called on development partners to scale up and fulfil their official development assistance (ODA) commitments.  His Government is accelerating digitization in the delivery of services and the country’s people are demonstrating conceptual agility to do things differently.  He expressed solidarity with fellow Member States in special situations.  He called for the removal of unilateral coercive measures targeting Zimbabwe, voicing concern that such actions were not advancing its people’s livelihoods, nor the cause of the Sustainable Development Goals.  Turning to the climate crisis, he said his country remains committed to its target of a 15 per cent carbon emissions reduction by 2030 indicated in its nationally determined contribution.