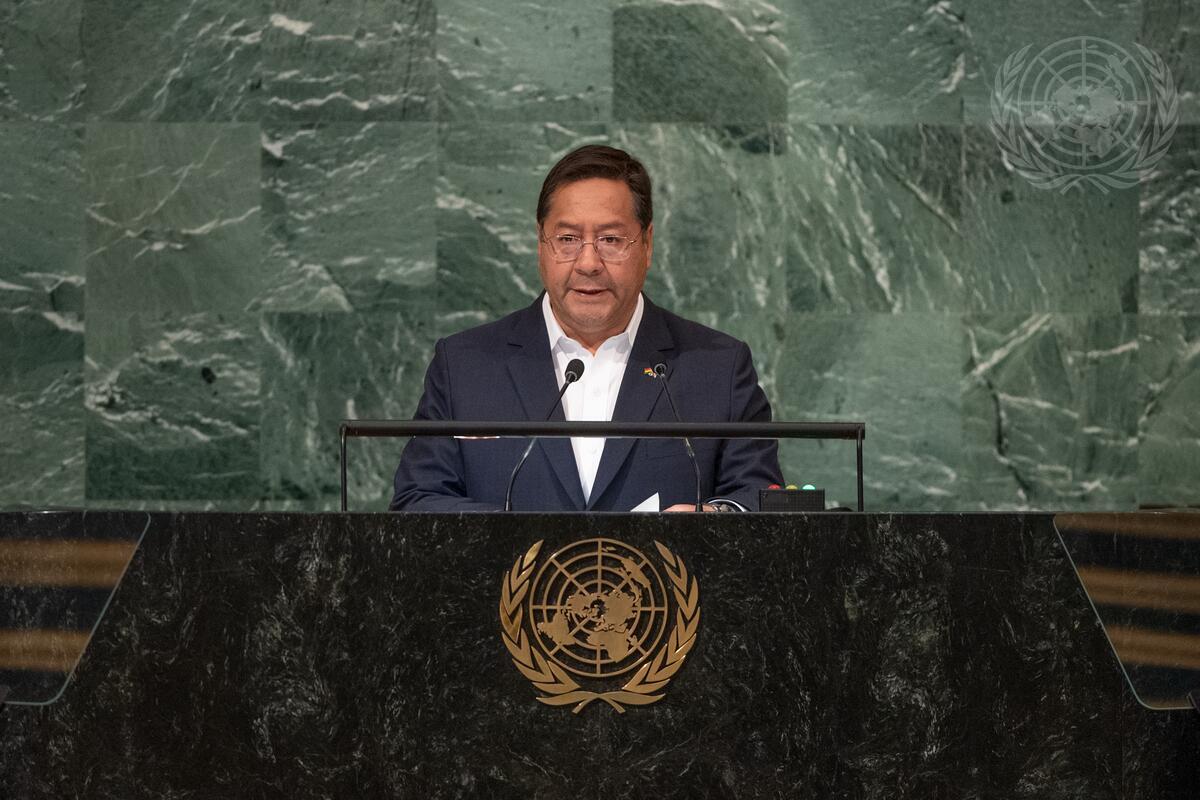 LUIS ALBERTO ARCE CATACORA, President of Bolivia, pointed to the multiple and systemic crises of capitalism which are increasingly threatening humanity and the planet.  Urging all to clearly identify their origins in order to change the system that currently reproduces domination, exploitation, and exclusion, he said the construction of a new world order is inexorable.

In expressing dismay at the number of armed conflicts, many of which have been promoted by military transnational corporations to impose a global capitalist world order, he called for the world to be declared as a zone of peace.  Beyond the high human cost, such conflicts lead to the destruction of cultural and environmental heritage.  While reiterating Bolivia’s commitment to dialogue and diplomacy, he observed the increasing deterioration of multilateralism at the “fancy” of capitalist powers.  As any breach of international peace and security is linked to either the inadequate implementation of United Nations mechanisms or the flagrant violation of the United Nations Charter, the Organization must work tirelessly to achieve a ceasefire between the Russian Federation and Ukraine, to ensure that the historic rights of the Palestinian people and state are respected and that the North Atlantic Treaty Organization (NATO) sets aside its expansionist plans.  The manufacture of weapons must be substituted by fair compensation to the poor people of the world.

Turning to the vulnerabilities and inequalities of health care systems around the world and to the inequalities of the global financial and economic system, he advocated for a universal system of health care.  In speaking about the food crisis which has been aggravated by the COVID-19 pandemic, geopolitical conflicts and environmental crises, he called for harmony with Mother Earth and for the urgent implementation of a global programme of food security that guarantees better conditions for small-scale producers.  The productive and economic capacities of countries on the periphery which have been hit hard by inflation and by the concentration of capital must be rebuilt.  In sharing the experiences and policies of Bolivia, he stressed that the global financial architecture must be restructured to ease external debt burdens so that developing countries can implement social policies with a focus on comprehensive and sustainable social and economic development.  There must also be a specific financial mechanism based on solidarity to confront the climate-related losses and damages experienced by developing countries.  A future that is low in emissions and resilient, he warned, is not possible if the economic, social and political contradictions of the capitalist model remain unresolved and if there is no harmony between human beings and nature.

Speaking against the industrialization of lithium, he guaranteed that Bolivia’s reserves will be used to benefit the well-being of peoples and not transnationals.  Rejecting any attempts of interference and of democracy destabilization, he called upon the United Nations to take measures against countries that do not respect the sovereignty of others in the control of strategic, natural resources.  On drug trafficking, he advocated for a change in approach towards a regional and comprehensive one which focuses on demand, is less militarized, and undertakes an economic and social approach.  In drawing attention to the global imbalances and injustices on the law of the sea, he called for international mechanisms to be strengthened with preferential treatment for landlocked countries.  There must be, he added, a just distribution of rights and responsibilities of marine resources.

On human rights, he expressed his strongest commitment to the decisions and actions undertaken by United Nations in defence of the most vulnerable.  Citing the incongruity between the privileges of the few at the expense of the economic, social and cultural rights of the majority, he urged an expansion of human rights criteria for democracies.  Noting the need for solidarity and equity across generations, he voiced hope that the lack of a universal treaty which protects older adults presents an opportunity for in-depth reflection.  In calling attention to the persistence of violence against women and girls, particularly indigenous women and girls living in poverty, he proposed that the General Assembly dedicate this decade towards the elimination of patriarchy.  Turning to the unilateral approaches of other countries, namely the United States’ inclusion of Bolivia on a list of major drug transit and major illicit drug producing countries and its inhumane, criminal sanctions on Cuba, he called for the rejection of unilateral sanctions.  Only through guaranteeing the full validity of the United Nations Charter and through multilateralism, he concluded, can the fragile international order be reconfigured to be more pluralistic and stronger.