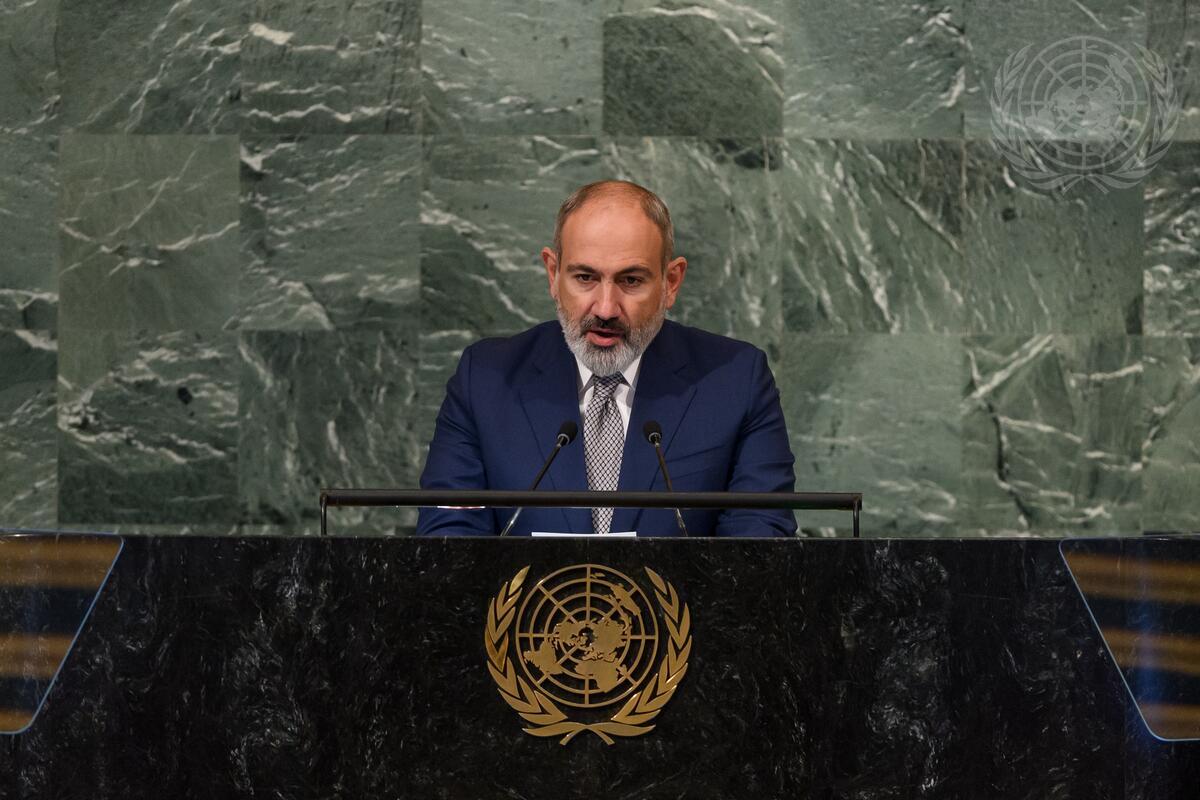 NIKOL PASHINYAN, Prime Minister of Armenia, said that on 13 September Azerbaijan launched an unprovoked military aggression against Armenia:  its armed forces shelled 36 residential areas and communities, including the towns of Goris, Jermuk, Vardenis, Kapan, and Geghamasar.  This was not a border clash, it was a direct attack against the sovereignty and the territorial integrity of Armenia, he underscored.

Detailing the Azerbaijani attack that deliberately targeted the civilian population and vital civilian infrastructures, he said all the residents of Jermuk are displaced while overall number of people temporarily displaced from Gegharkunik, Vayots Dzor, and Syunik regions is more than 7,600, mostly women and elderly, among them 1,437 children and 99 persons with disabilities.  He said 192 houses, three hotels, two schools, and one medical facility were destroyed, and seven electrical infrastructure systems, five water infrastructure systems, three gas pipelines and one bridge were damaged.  The Kechut water reservoir was targeted and shelled, as were journalists and ambulances.  As a result of the aggression, the number of victims and missing persons exceeded 207, he said, citing cases of torture, mutilation of captured or already dead servicemen, extra-judicial killings, and ill-treatment of Armenian prisoners of war.  The dead bodies of Armenian female military personnel were mutilated and then video-recorded with cruelty by the Azerbaijani servicemen.

Warning that Azerbaijan intends to occupy more territories of Armenia and the risk of new aggression remains very high, he recalled that Azerbaijan is keeping under occupation tangible territories of Armenia.  “Could you show the map of Armenia, that you recognize or are ready to recognize as the Republic of Armenia?” he asked the President of Azerbaijan, a country that “will continue to use delimitation process for territorial claims against Armenia”.  On the opening of regional transport communication links, he said Armenia — despite being portrayed by Azerbaijan as a “destructive side in this discussion” — is ready to open its roads for Azerbaijan in the framework of its national legislation.

He went on to underline that the most recent Azerbaijani aggression is happening while the humanitarian consequences of the 2020 war in Nagorno-Karabakh had not been addressed yet.  In this context, he drew attention to the post-war rehabilitation of Nagorno-Karabakh, the psycho-social issues of the displaced population, and the repatriation of Armenian prisoners of war.  The Armenians in Nagorno-Karabakh need the support of the international community, he stressed, calling for unhindered access of United Nations humanitarian agencies to Nagorno- Karabakh.  The Office of the United Nations High Commissioner for Refugees (UNHCR) and the independent fact-finding mission of United Nations Educational, Scientific and Cultural Organization (UNESCO) should have access to the Nagorno-Karabakh conflict zone, he asserted.  Unfortunately, he continued, Azerbaijan has been blocking both missions.  He concluded by reiterating his country’s determination to defend its democracy, independence, sovereignty, and territorial integrity by all means.

The representative of Armenia, responding to the statement made by the delegate of Azerbaijan, said that that country, through its blatant disinformation, was attempting to distract the international community’s attention away from its policy of use of force and threat of force to achieve its expansionist goals in the region.  He said that Baku’s latest military offence earlier this month killed 200 people, with 20 servicemen captured and 8,000 people temporarily displaced.  Atrocities, including against women, were video recorded and celebrated on social media in Azerbaijan.  It is imperative to fully investigate such atrocities and bring perpetrators to justice.  While the Security Council appealed for no military or violent solution to the conflict, Azerbaijani troops continue to remain inside the territory of Armenia.  “In the absence of proper accountability measures, policies of aggression are likely to continue and increase — this must be stopped and condemned at all levels,” he stressed.  Azerbaijan opposes an international monitoring verification mechanism to identify ceasefire violations, while that country’s policy of ethnic cleansing and genocidal intent is the reason the conflict erupted in the first place, he said.

The representative of Armenia, speaking in second exercise of the right of reply to respond to the unwillingness of Azerbaijan to refrain from the use of force and engage in constructive dialogue, said the massive concentration of Azerbaijan’s troops reveals the premeditated nature of its large-scale aggression.  Cities and densely populated areas in Armenian territory came under heavy fire, he stressed, voicing concern over the heavy toll of this unprovoked aggression on Armenia’s servicemen and civilian population.  Cautioning against Azerbaijani expansionist plans, he said Azerbaijan’s historic narratives deny the very existence of the Armenian people in their historical homeland.  On the so-called hatred in Armenia against Azerbaijan, he said these allegations of Azerbaijan are not reinforced by any international document.  Meanwhile, the State-led policy of dehumanizing Armenians, creating fertile ground for atrocity crimes, is well‑documented, he said.