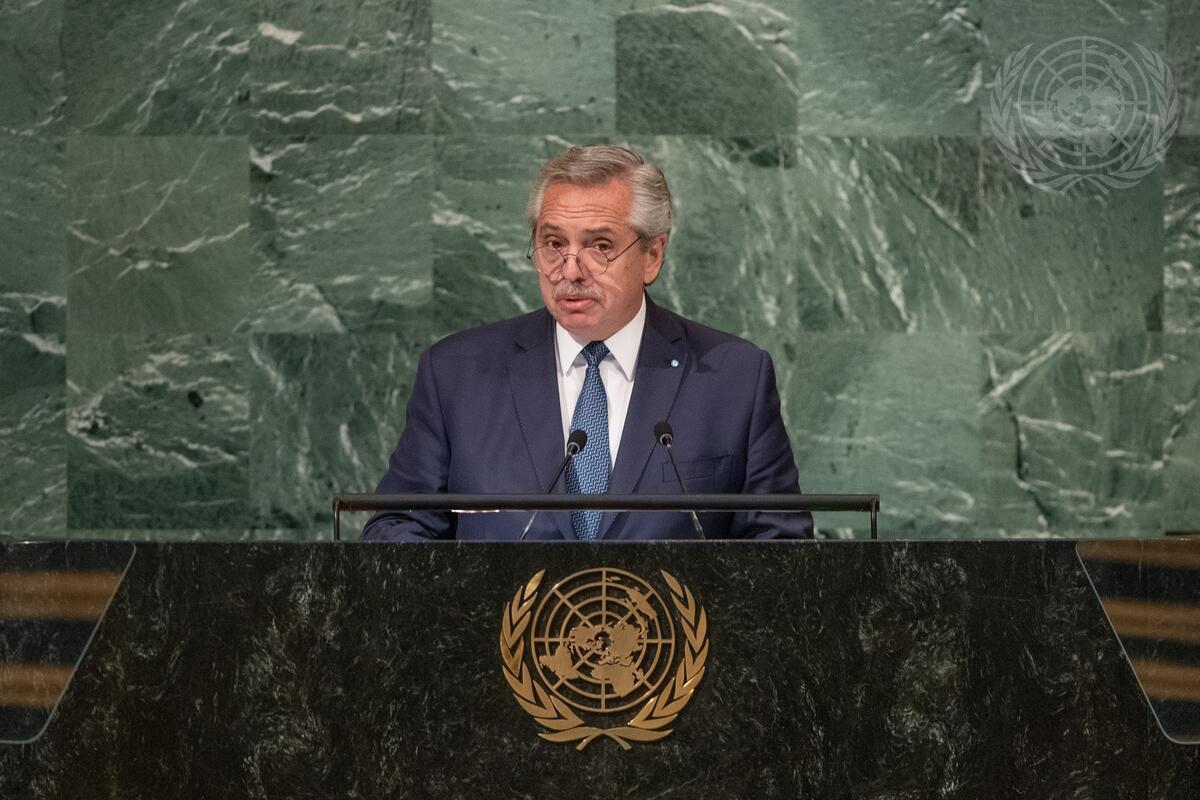 ALBERTO FERNÁNDEZ, President of Argentina, recalling the recent attempt to assassinate his country’s Vice-President, said that this did not only disturb the peace, but sought to destroy its “beautiful collective project” of four decades of democracy.  This fascist violence — which wears the guise of republicanism — seeks to take advantage of the anxiety generated by the pandemic and the economic effects of war to sow discord in societies, and remaining silent on this matter may plunge the rule of law itself into crisis.  Pointing out that those who seek to erode democracy have specific interests that prompt them to promote extreme polarization, he urged the international community not to resign itself to this state of affairs and, rather, condemn — on a global level — those who spread division in communities.  The General Assembly must take note of the warning signs around the globe, he stressed, lest more serious clashes follow.

Noting that the pandemic has revealed acute inequalities that plague the global population, he asked if it was right that the fortune of 10 men is greater than the income of 40 per cent of the world’s people, or that the pandemic claimed four times more lives in the world’s poorest nations.  Not speaking out against this model of accumulating income in the hands of a few may make the international community complicit in strengthening this inequality, he said, calling for bolstered multilateralism to strengthen the rule of law.  To tackle persistent challenges like war, hunger and inflation, all hostilities now raging must cease, dialogue must prevail and peace must be restored following the Russian Federation’s military advance on Ukraine’s territory.  Further, the international community must abandon the economic and financial practices that the developed world has forced on the developing one, as maintaining the status quo will only increase poverty and marginalization.

On that point, he said that nations in debt have suffered acutely from the established financial system and thanked those countries that have supported Argentina in its process of renegotiating external debt.  There must be a paradigm shift in the international financial system that supports the goals of the 2030 Agenda and, additionally, food security must be guaranteed for all people.  “We cannot allow time to pass and famine to reign,” he stressed.  For its part, Argentina will continue to produce and export nutritious, quality food, but the international community must guarantee a fairer international trade system for agricultural produce.  This will allow food-producing nations to make the necessary investments to increase production and mitigate global hunger.  Highlighting the additional need for safe, predictable access to energy, he said that Argentina is increasing its production to provide the world with clean energy.

He stressed, however, that these efforts will be in vain “if we do not walk this path in the broader context of more equitable economic and social development”.  The international community must advance a form of development that benefits all, and cooperation is needed to address urgent challenges such as climate change, biodiversity loss and plastic pollution.  He went on to point out that, as not all countries are equally responsible for the climate crisis, the responsibility for tackling this issue must be differentiated to lighten the burden of climate change on those not responsible for the phenomenon.  He also stated that the only legitimate sanctions are those imposed by the Security Council to enforce decisions taken in the maintenance of international peace and security, calling for the lifting of the blockades beleaguering the people of Cuba and Venezuela.

Noting that Argentina holds the Presidency of the Human Rights Council in 2022, he emphasized that the defence of human rights forms part of his country’s identity and history.  In this vein, Argentina has broadened citizens’ rights, championed the equality of women and non-binary persons and extolled social equality.  He also underlined that everyone must be able to access the advances offered by this digital era, calling for universal access to information and communications technology.  On the 1994 bombing of the Asociación Mutual Israelita Argentina, he urged Iran to cooperate with the investigation of this attack and the international community to avoid sheltering any of those charged in the same.  Additionally, reiterating Argentina’s sovereignty over the Malvinas, South Georgia and South Sandwich islands and their associated maritime areas, he called on the United Kingdom to end this “anachronistic colonial situation”.