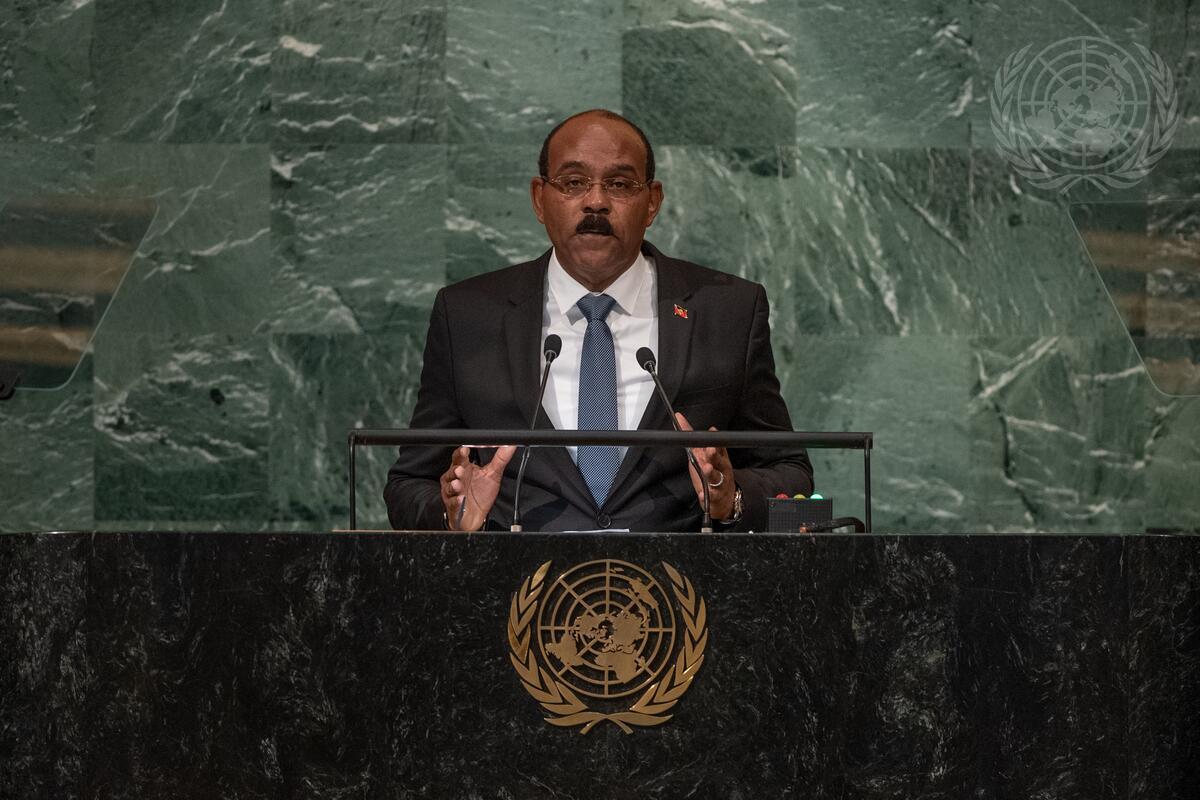 GASTON ALPHONSO BROWNE, Prime Minister of Antigua and Barbuda, recalled that the five victorious nations of the Second World War assigned to themselves permanent Security Council membership, assuming the responsibility to implement the Charter of the United Nations — both for their own interests and those of the nations that had no option but to trust them.  “The state of today’s world does not readily inspire such trust,” he said, asking on behalf of small countries like his own what happened to the commitments chiselled on the Charter as binding obligations on all.  The nations of the world are now gripped with economic instability, the worry of expanded warfare, escalating inflation, food shortages, high prices and increasing debt.  However, pointing out that the worst effects are being suffered by “the poor and powerless, the small and exposed”, he stressed that small nations now felt unprotected by a weakening international legal order that was their first, last and only defence against aggression.  Concerted Council action is necessary to prevent major human-rights violations, stop ongoing breaches and address global conflicts and, if this fails to happen urgently, the General Assembly may have to initiate and implement its own global actions.

Underscoring that “peace in the world is not a commodity to be traded”, he said that this observation was also pertinent to the issue of climate change, which poses an existential threat to small island States and countries with low-lying coastlines.  Although global warming is universal, its burden falls mostly on the poor in small developing nations, such as Antigua and Barbuda.  Urging the General Assembly to act on behalf of the small and powerless in the interest of global justice, he spotlighted a resolution that will be proposed by Vanuatu in the coming months.  It will request the International Court of Justice to provide an advisory opinion clarifying the legal obligations of States to protect human rights and environments from climate change, and nations concerned about the ravages of climate change should support the text.  He also noted his own country’s initiative — together with Tuvalu and Palau — to launch the Commission of Small Island States on Climate Change and International Law, which will seek an opinion from the International Tribunal for the Law of the Sea regarding State obligations to mitigate the effects of their greenhouse gas emissions.

He went on to note that, while small countries “have talked ourselves hoarse since the 1980s”, promises were repeated year after year that, on the evidence, were meant to “placate and divert, but not to perform and deliver”.  The stage now seems set for the upcoming United Nations Climate Change Conference in Egypt to fail, he noted, as the Group of 20 (G20) failed to produce a joint statement on climate change.  This sends an ominous signal that, yet again, the Conference will be “long on words, but very short on deeds”.  He underscored, however, that small States would attend the Conference and argue strenuously to establish a new fund for loss and damage response.  Further, he insisted that those States most responsible for this dire situation respect their obligations to halt global warming and provide compensation to its victims.  Also detailing the devastating effects of climate change on industrialized nations in 2022, he stressed that, even if those Governments remained reluctant to curb emissions for the sake of the most-vulnerable globally, “they should be motivated by the perils for their own people”.

Turning to other international conditions that have unfairly delayed economic development and social progress in small island developing States, he said that the United States’ unjust embargo on Cuba is undermining that country’s efforts to eliminate poverty and improve living standards.  Urging the United States to immediately lift the same, he also said that his country looks forward to normalized relations between the United States and Venezuela.  He also pointed out that his country has been denied access to concessional financing due to a single criterion, applied by international financial institutions, that classifies some small island developing States — like Antigua and Barbuda — in the same category as the United States, Japan and Germany.  This criterion — per-capita income — fails to take into account structural limitations such as limited natural resources or the reality that small island developing States are forced to import a large percentage of goods for consumption.

He therefore called on the General Assembly to stop penalizing small island developing States for good performance, noting that climate disasters and inability to obtain concessional financing have resulted in high, unsustainable debt for many such States.  Underscoring that the international community must change the way in which it responds to small island developing States, he spotlighted the fourth International Conference on Small Island Developing States that his country will host in 2024 and called on all Member States to begin the process of recommitting to small island States to offer lasting solutions to their needs.  Adding that the world is now dominated by a conflict in the developed world — not the developing one — he called on the parties to the war in Ukraine to end the globally debilitating conflict.  Interconnected challenges demanded meaningful international cooperation, he stressed, urging those present to “turn words into collective action”.