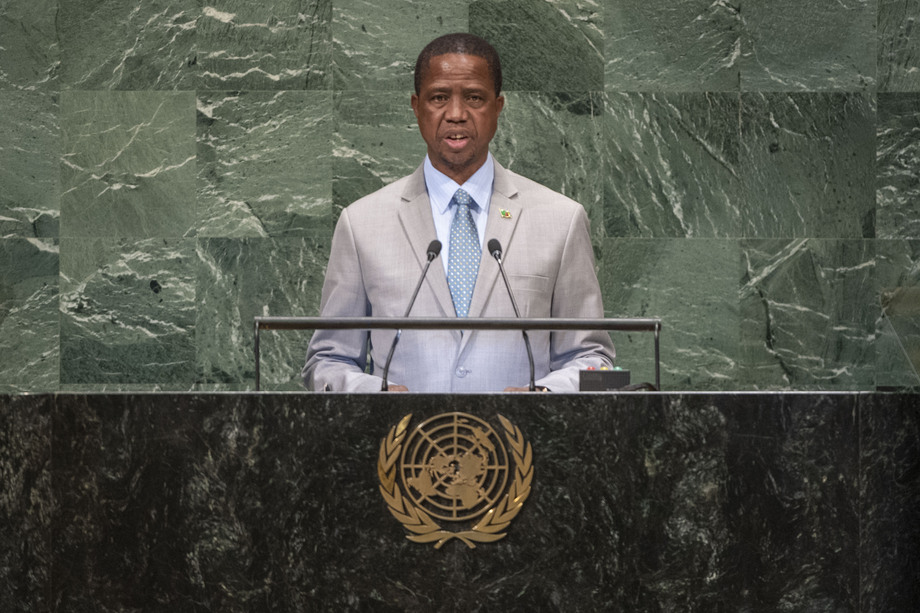 EDGAR CHAGWA LUNGU, President of Zambia, said little has changed in the African continent’s situation over the last seven decades.  Today, however, the effective implementation of the 2030 Agenda and Agenda 2063 present huge opportunities for Africa to revitalize its growth and further accelerate its transformation, as both frameworks seek to achieve inclusive growth, sustainable development, peace and security.  Noting that Zambia’s development path is guided by its “Vision 2030” plan — aimed at making it a prosperous middle-income country by that date — he said its successful implementation still faces many hurdles.  Zambia’s economy, like those of many other developing countries, depends on commodities for economic growth and has not been spared by the negative impacts of their declining prices on the international market.

Reiterating Zambia’s determination to overcome those challenges by creating a more diversified and resilient economy driven — among other things — by agriculture, tourism and energy, he said robust infrastructure development, regional partnerships and conducive policy frameworks will also play critical roles.  The country has mainstreamed the 2030 Agenda, Paris Agreement, Addis Ababa Action Agenda and Agenda 2063 into its national development plans and is focusing on such initiatives as road construction and rehabilitation; the expansion and construction of hydropower stations; the diversification of energy towards renewable sources including solar power; rehabilitating railways; and construction and modernization of airports.

Outlining some of the country’s important policy and structural reforms, he spotlighted the Economic Stabilization and Growth Programme, which improves domestic resource mobilization and modernizes revenue collection processes.  Meanwhile, Zambia — mindful of the challenges in financing development as well as the declining resources and ODA being allocated to least developed nations and other countries in special situations — continues to call on all its partners to help it implement the Sustainable Development Goals.  Expressing support for Council resolution 2378 (2017) on peacekeeping reform, he welcomed a stronger focus on mediation, ceasefire agreements and the monitoring and implementation of peace accords, and voiced support for the Secretary-General’s proposed Action for Peacekeeping initiative.

Zambia has increased the number of its troops in United Nations peacekeeping operations, including deployed women, he continued.  In addition, his country recently took up the chairmanship of the Southern African Development Community (SADC) Organ on Politics, Defence and Security, a position it will hold until August 2019.  Turning to gender equality and women’s empowerment, he underlined Zambia’s commitment to eliminating all forms of violence and discrimination against women and girls, noting that it implemented a “50‑50” school enrolment policy and in 2017 began distributing free sanitary towels to girls in rural and peri-urban areas to help them remain in school.  Meanwhile, traditional leaders across the country have been helping to combat child marriage and forced marriage.

Noting that the world is witnessing a movement of migrants too vast for any one country to handle alone, he underlined the importance of collaborative efforts and stressed that — if well managed — migration has the potential to contribute to the socio-development of both origin and destination countries.  Voicing support, in that respect, for the Global Compact for Migration, he also underscored the centrality of the principle of responsibility sharing for hosting and supporting the world’s refugees, while considering the differing capacities and resources of Member States.  Expressing concern over the little progress made in reforming the Security Council, he reiterated the call for two permanent members representing Africa, declaring:  “Not only is this a matter of common decency and correction of a historical injustice, but [also of] restoring the dignity of Africa.”