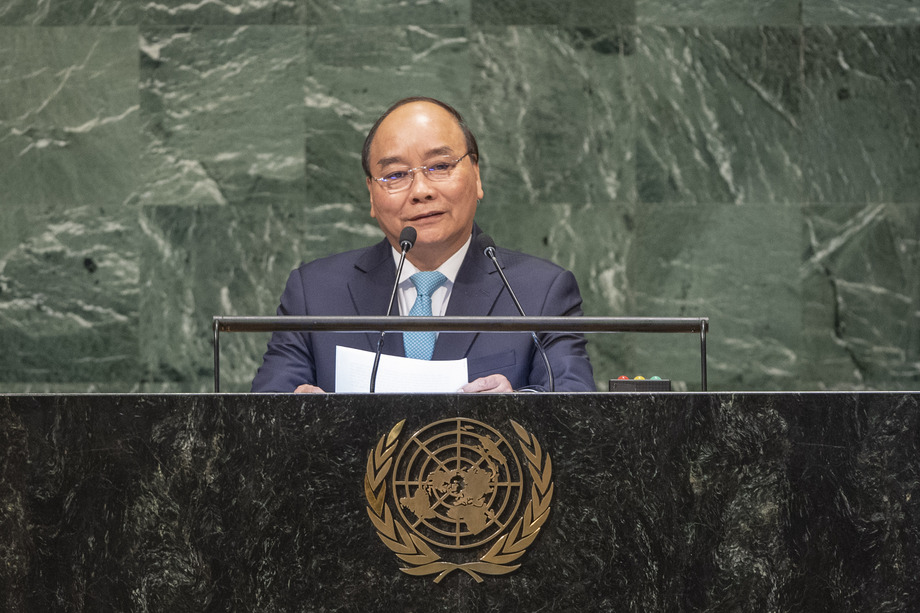 NGUYEN XUAN PHUC, Prime Minister of Viet Nam, thanked the General Assembly for the minute of silence in memory of Tran Dai Quang, former President of Vietnam, who recently passed away.  Noting significant achievements in recent years thanks to global cooperation and development, such as the adoption of the Convention on the Prohibition of Nuclear Weapons, United Nations reforms, Millennium Development Goals and the 2030 Agenda for Sustainable Development, he said the United Nations has become a true symbol of global solidarity.  Viet Nam  staunchly supports its central role in maintaining global peace and security, protecting and promoting human rights, and fostering development cooperation.

Once a poor, underdeveloped country, Viet Nam has experienced average annual GDP growth of over 6 per cent in the last 20 years, transforming it into one of the world’s largest food exporters and dramatically improving living standards for nearly 100 million citizens.  As a party to 16 free trade agreements, Viet Nam enjoys free trade relations with almost 60 major countries and partners worldwide.  It hosted the 2018 World Economic Forum on the Association of Southeast Asian Nations (ASEAN) and it is working towards the 2025 Vision for the ASEAN community.  Viet Nam is also striving to promote justice and sustainable development, foster equality and support for disadvantaged groups, protect the environment, and uphold human rights for all, he said, citing its focus on preserving cultural heritage and national identity.  It is one of the few countries that has achieved several millennium targets ahead of schedule.

International disputes should be settled by peaceful means in line with international law and the United Nations Charter, he said, stressing that the dispute concerning the South China Sea should be addressed on the basis of the 1982 United Nations Convention of the Law of the Sea as well as on the principle of safeguarding maritime security, navigation and overflight rights and freedoms.  He also noted the value of international cooperation and assistance in Viet Nam’s progress towards sustainable development, international integration and poverty reduction.

While scientific and technological breakthroughs as well as globalization, are creating opportunities for unprecedented economic growth, the world is also facing new and immense obstacles, he said.  Power politics, the use or threat of force and the rise of unilateral measures still threaten global peace and stability, while injustice, inequality, climate change, pollution and poverty persist.  “No single nation can singlehandedly address the enormous global challenges,” he said, stressing that common efforts and collaboration of all nations are needed.  The international community should uphold “dual responsibility” in which each nation and individual should take additional responsibility for addressing global issues.  He also called for the lifting of the unilateral embargo on Cuba so that it may equitably and fairly participate in economic and trading relations.

Mankind’s progress is measured not only by technological advances, but by peace and prosperity; even the smallest opportunity for peace must be cherished and nurtured.  “The voice of small nations and the aspiration of the disadvantaged need to be respected, heard and shared,” he said.  He called for stronger high‑level United Nations‑ASEAN cooperation.  With a foreign policy based on cooperation, development and international integration, Viet Nam hopes to contribute more to the creation of multilateral mechanisms, he said, noting that it had dispatched a level‑2 field hospital to the United Nations Mission in South Sudan (UNMISS).  Lastly, he noted his country’s candidacy for non-permanent Security Council membership in 2020-2021, thanking the Asia-Pacific Group for its endorsement and calling for the support of all Member States.