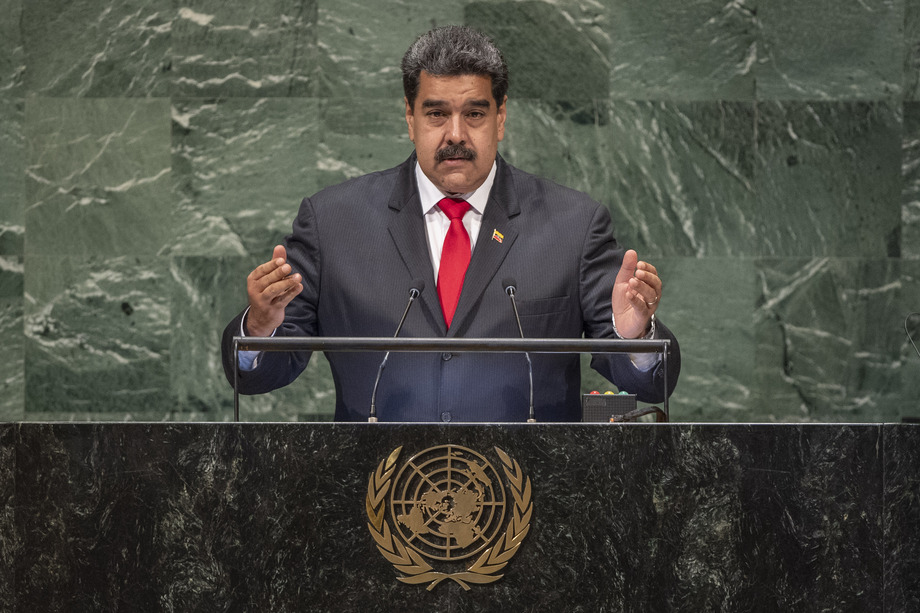 NICOLÁS MADURO MOROS, President of Venezuela, said he is part of a revolutionary people and a land that will never come to its knees.  Paying tribute to a proud people living in the country where Simon Bolivar was born and whence he “freed a continent” from colonialists and enslavement, he cited Venezuela’s history of heroic resistance and support of indigenous peoples.  Decrying shameful actions against his country, he said that President Donald Trump used his United Nations address to invoke a doctrine that imposed the rule of the United States from 200 years ago, that intervention is possible and that he can be judge and policeman of the world.  Describing the Monroe Doctrine as an imperialist expression of ownership of the Americas, he said “our people rose against it because we wanted freedom and equality”, but that the United States wants to continue giving orders to the world in the twenty-first century as it did in the preceding one.

Stating that Venezuela is regarded as having the largest oil reserves in the world, the fourth largest gas reserves and may have the largest gold reserves, he described them as areas of geopolitical interest for “oligarchs in Washington” who want to control Venezuela.  Saying Venezuela has been subjected to illegal actions and economic persecution and cannot use the United States dollar in any international transactions, he denounced President Trump’s mention of possible further sanctions “in this sanctuary of international law”.  Venezuela is also being attacked constantly in the media to justify intervention, he said, citing a recent New York Times article on how to bring about regime change.  Regardless, his nation has been able to prevent coups, violence and military offensives.

Referring to similar concerns, he cited examples of United States intervention in his country and others, including the invention of a “migration crisis” in Mexico and the NATO bombing of Libya, which in fact has led to a real forced migration crisis in Africa.  Providing examples of further interference in Venezuela, he asked how many coup d’états and dictatorships had been imposed on Latin America, blaming the United States who believed “that we could not govern ourselves as we saw fit”.  Stating that a 4 August terrorist drone assassination attempt against him in Caracas was prepared and funded from the territory of the United States, he requested a special United Nations rapporteur to carry out an independent investigation.  Yet despite vast differences, he said he is willing to reach his hand out to President Trump to discuss regional matters bilaterally.  Venezuela is peaceful and friendly and appreciates the culture, art and social life of the United States, but it is against the “imperialists in Washington”.

Domestically, he pointed to a programme reestablishing a new economy not solely based on oil money, but one that is sustainable.  The international community must build a multipolar world, as there is not one single economic model to impose on anyone.

Declaring solidarity with the Palestinian people and calling for the immediate end of the blockade of Cuba, he said:  “We have a world to build”, stating that “Venezuela is stronger than ever” and aims to create its own twenty-first century socialist model.  Paying tribute to the Nelson Mandela Peace Summit, he cited the South African leader as a man once known as a terrorist who is now a “symbol of what can be done if you are strong enough to rebel and struggle for justice”.