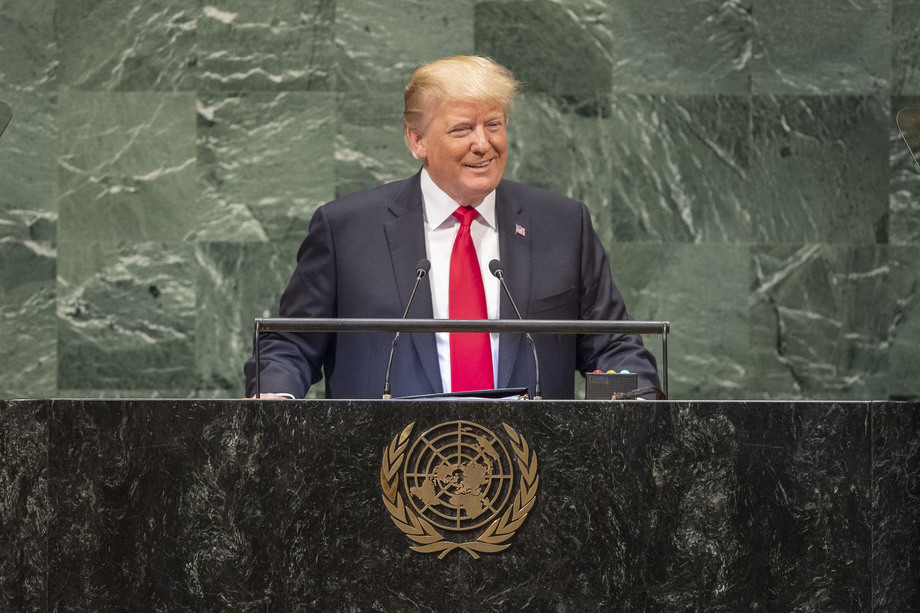 DONALD J. TRUMP, President of the United States, underscored the progress made by his country since his election, stating that it is now stronger, safer and richer.  “We are standing up for America and the American people, and we are also standing up for the world,” he said.  When nations respect the rights of their neighbours and defend the interests of their people, they can better work together to secure the blessings of prosperity and peace.  The United States will always choose independence and cooperation over global governance, control and domination, he said.  It will not tell others how to live or work or worship; it only asks that its sovereignty be honoured in return.

Highlighting the United States engagement with the Democratic People’s Republic of Korea, he thanked its leader Kim Jong-un for his courage and for the steps taken towards a denuclearized Korean Peninsula.  However, much work remains to be done, he said, emphasizing that sanctions will remain until denuclearization occurs.  In the Middle East, the new American approach is making great strides, with Gulf nations assuming greater responsibility in the fight against terrorism and extremism.  Ultimately, it is up to the nations of the region to decide the kind of future they want.  For that reason, the United States is working with the Gulf Cooperation Council, Jordan and Egypt to set up a regional strategic alliance to advance prosperity and stability.  Turning to the defeat of Islamic State in Iraq and the Levant (ISIL/Da’esh) in Iraq and Syria, he said the international community’s shared goal in Syria must be a de-escalation of the military conflict alongside a political solution that honours the will of the Syrian people.  The United Nations-led peace process must be reinvigorated, but the United States will respond if chemical weapons are deployed by the Assad regime.  Commending Jordan and others for hosting Syrian refugees, he emphasized that the most compassionate policy is to place refugees as close to their homes as possible.

Every solution to the humanitarian crisis in Syria must include a strategy to address the brutal and corrupt regime in Iran that has fuelled and financed it, he continued.  The leaders of Iran are sowing chaos, death and destruction, disrespecting their neighbours’ borders and sovereignty, and plundering their country’s resources.  Many countries in the Middle East supported the decision of the United States to withdraw from the Joint Comprehensive Plan of Action and to reimpose targeted nuclear sanctions.  “We cannot allow the world’s leading sponsor of terrorism to possess the planet’s most dangerous weapons,” he stated, calling for the Iranian regime to be isolated.  Recalling the relocation of the United States Embassy in Israel to Jerusalem, he said peace between Israelis and Palestinians has been advanced, not harmed, by acknowledging the obvious facts.  “America’s policy of principled realism means we will not be held hostage to old dogmas, discredited ideologies and so-called experts who have been proven wrong over the years, time and time again,” he said.

On other global issues, he said trade must be fair and reciprocal.  No longer will the United States be taken advantage of by those who abuse its openness by dumping exports, subsidizing industries and manipulating their currencies.  Many Member States will agree that the world trading system is in dire need of change, he said, affirming that the United States trade imbalance with China cannot be tolerated.  On human rights, he said the United States will not return to the Human Rights Council until real reforms are enacted.  Nor will the United States support or recognize the International Criminal Court, which has no jurisdiction, legitimacy or authority.  He called on the member States of the Organization of the Petroleum Exporting Countries to lower oil prices and spend more on defence, and warned that Germany will depend entirely on Russian energy if it fails to change course.  Reaffirming the rejection by the United States of outside interference in the Western hemisphere, he underscored its cooperation with Latin American partners on migration.  However, the United States will not participate in the Global Compact for Safe, Orderly and Regular Migration.  Migration should not be governed by an international body unaccountable to citizens.  The only long-term solution to the migration crisis is to help people build more hopeful futures in their own countries — to “make their countries great again”.

Describing the situation in Venezuela as a human tragedy, he urged Member States to call for the restoration of democracy in that country.  The United States is reviewing its foreign assistance programme to see what works, what does not work and whether recipient countries have the interests of the United States at heart.  On the United Nations, he affirmed his commitment to make the Organization more effective and accountable.  It has unlimited potential, he said, but stressed the United States will not pay more than 25 per cent of its peacekeeping budget.  The world is a better place thanks to a constellation of nations, each of them special, unique and shining brightly in their part of the world, he said, adding that sovereign and independent nations are the only vehicles where freedom, democracy and peace have survived and prospered.  “Together let us choose a future of patriotism, prosperity and pride.  Let us choose peace and freedom over domination and defeat and let us come here […] to stand for our people and their nations — forever strong, forever sovereign, forever just and forever thankful for the grace and the goodness and the glory of God.”