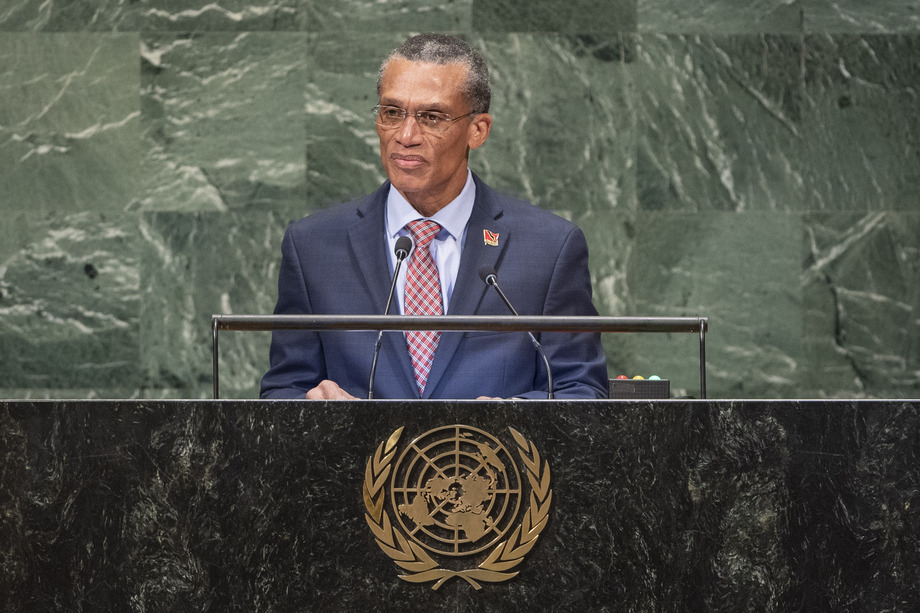 DENIS MOSES, Minister for Foreign Affairs of Trinidad and Tobago, said María Fernanda Espinosa Garcés’ presidency of the General Assembly is an impetus for global rethinking and acceptance of female leadership.  Further, this year’s Assembly debate compels States to reflect on the nexus between the United Nations reform agenda and the shared pursuit of a sustainable future.  With the push towards cost-saving reform, the Organization must not lose sight of its foundational principles.  Recognizing the need to serve all people, his country developed the “Vision 2030” national development strategy, as it is imperative to ensure equal opportunities are available to the most vulnerable members of society.

Small island developing States are disproportionately affected by external shocks, he underscored, adding that the Samoa Pathway is an essential component in the development frameworks of those States.  As part of efforts to achieve the goals of the 2030 Agenda, regional partners are taking action to address the threat of non-communicable diseases.  Climate change is the most pressing challenge of the time and casting doubt on its scientific truth delays urgent action needed to confront the existential threat.  His Government is formalizing its commitment to the Paris Agreement, including reducing greenhouse gas emissions by 15 per cent by the year 2030 and supporting international efforts to tackle shared environmental challenges.

The labelling of the Caribbean Community (CARICOM) countries as “non-cooperative tax jurisdictions” severely destabilizes the region’s financial sector, he warned, noting that the label stymies the region’s engagement in the global financial system.  The United Nations recognizes the link between peace and development and persistent conflicts around the world are reminders of the need to promote a positive, dynamic and participatory international peace and security architecture.  Illicit arms trading and transnational organized crime affect the social and economic fabric of the Caribbean, he said, noting his country’s subscription to the object and purpose of the Arms Trade Treaty.

International peace and security must be supported by a robust international legal system and Trinidad and Tobago remains a fervent supporter of the International Criminal Court, he said.  The Court’s jurisdiction is only invoked when States are unable or unwilling to prosecute those accused of the most serious crimes.  Efforts to strengthen multilateral peace and security will fall short unless there is real and significant reform of the Security Council so that body is able to address the challenges faced by small island developing States.  The unifying power of dialogue is on full display in the Korean peninsula, he said, while voicing concern over the ongoing embargo against Cuba.  More so, facing global challenges calls for deep partnerships, meaningful dialogue and an appropriate view of established mechanisms and institutions, he stressed.