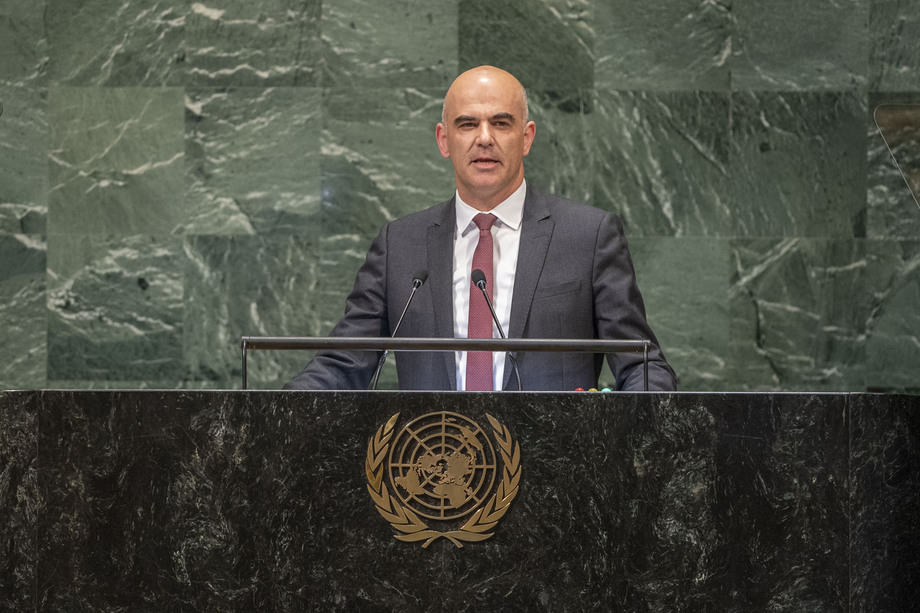 ALAIN BERSET, President of Switzerland, described a range of challenges including globalization, inequality, war and internal conflict, extremism, migration flows, climate change, health crises and the digital revolution.  United Nations Member States must ensure that international institutions and organizations can address those challenges.  However, he pointed to a “real crisis in multilateralism” when we are trying to forge the main pillars of future global governance.

Citing ongoing global crises particularly in the Middle East, he said that Switzerland is working for a just and lasting peace between Israelis and Palestinians based on a negotiated two-State solution in compliance with international law and relevant Security Council resolutions.  With the conflict in Syria entering its eighth year, the basic rules and principles of international humanitarian law and human rights are not respected.  More than 13 million men, women and children depend upon humanitarian aid, demanding we step up efforts for a political solution.  Similarly, in Yemen, the ongoing armed conflict has deprived millions of water, food and medical care.  He called on all parties to cease hostilities and come to the negotiating table.

These conflicts bring about large-scale health issues, he continued.  The spread of disease, especially in war zones and refugee camps, overburdens weakened health systems and requires vital protection of facilities and personnel to maintain access to medical care.  The United Nations must be strong to fulfil its role as the cornerstone of peaceful coexistence between all States.  Accordingly, Switzerland supports reform programmes launched by the Secretary-General in peace and security, development and management.

Determined to build a “better multiculturalism” beyond the talking stage, he said that his country is working to implement the 2030 Agenda and its 17 Sustainable Development Goals, aiming to establish a robust monitoring mechanism that provides for voluntary national reviews and progress reports.  Still, efforts are needed to combat global warming and negative environmental impacts of economic development.  He stressed the importance of culture and cultural diversity in stimulating economic, social and environmental sustainability.

He said that Switzerland supports the Human Rights Council, the International Criminal Court and United Nations High Commissioner for Human Rights, as respect for human dignity and fundamental rights are not optional.  International cooperation is essential to preventing conflict and establishing a framework for lasting peace.  He mentioned in particular the fight against impunity, as Switzerland worked for the adoption of the Rome Statute and the creation of the International Criminal Court 20 years ago.

Turning to Switzerland’s good offices, he said the country makes all necessary preparations “so that discreet peace talks of the kind undertaken by the parties to the conflicts in Syria or Yemen can take place”.  As the home to several United Nations agencies, Geneva is a platform for dialogue on new challenges in politics, society, innovation, science and economics.  Noting that trade protectionism and selfish interests “are enjoying a certain popularity at present”, he said such policies can only lead to a fall in trade and resulting decline in prosperity.  Describing that selfishness as a “malaise”, he said, “The world is not a zero‑sum game.  It is a positive‑sum game where cooperation creates only winners.”