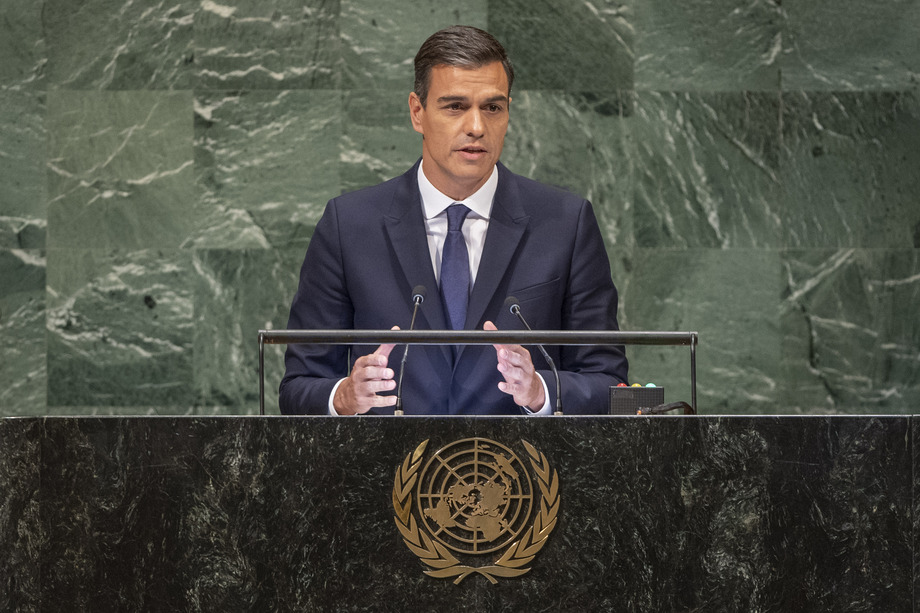 PEDRO SÁNCHEZ PÉREZ-CASTEJÓN, President of Spain, began by highlighting that for the first time in history a Latin American woman is presiding over the General Assembly.  “I am a feminist politician,” he added.  It is time to cultivate new cooperative leadership, based not only on a willingness to listen to others, but also a readiness to understand their motivations.  It is time to accept that no single person has a monopoly on the truth, he said.  Spain is fully committed to the 2030 Agenda, he added, stressing that the dignity of every single human being must be at the heart of all political action.

Without dignity and equality between women and men, without human rights, there can be no peace or development, he continued.  “There is no greater injustice than that which defines what a human being will or will not be, based on whether they are born a boy or a girl,” he stressed.  Calling for the development of a global road map to eradicate all forms of discrimination suffered by women, he said that gender‑based violence, trafficking of women and girls, and female genital mutilation must be stopped.

His cabinet of Ministers is 60 per cent women, he said, commending the Secretary‑General on having reached full parity in his Senior Management Group for the first time in the history of the Organization.  It is crucial that women participate as peace brokers in all phases of conflicts.  He also stressed the need to address the global migrant crisis, pledging commitment to the Global Compact on Refugees.  While Spain has suffered the calamity of the economic crisis more than any other Western European country, it has never turned its back on migrants.

He went on to underscore that more than 15 million girls will never have the chance to learn to read and write, and that 330 million women are living on less than $2 a day.  Pledging Spain’s full commitment to the 2030 Agenda, he said his country adopted its own action plan to implement sustainable development.  It focuses on combating gender violence, child poverty and energy poverty.  In addition, Spain is also committed to tackling climate change.  “Our future depends on renewable energy and clean technologies,” he added, expressing strong support also for the Paris Agreement.

Terrorism is still one of the major threats to freedom, he said, stressing the need to combat hatred and violence.  “We must do all that we can to prevent young people from falling prey to fanaticism,” he emphasized.  It is essential to invest in education and young people.  The spread of armed conflict demands the international community’s attention.  More than 160,000 Spanish troops have served, with loyalty and commitment, to United Nations peacekeeping operations.  He expressed support for the France/Mexico initiative to limit the use of veto power in cases of mass atrocities and for reform of the United Nations proposed by the Secretary‑General.