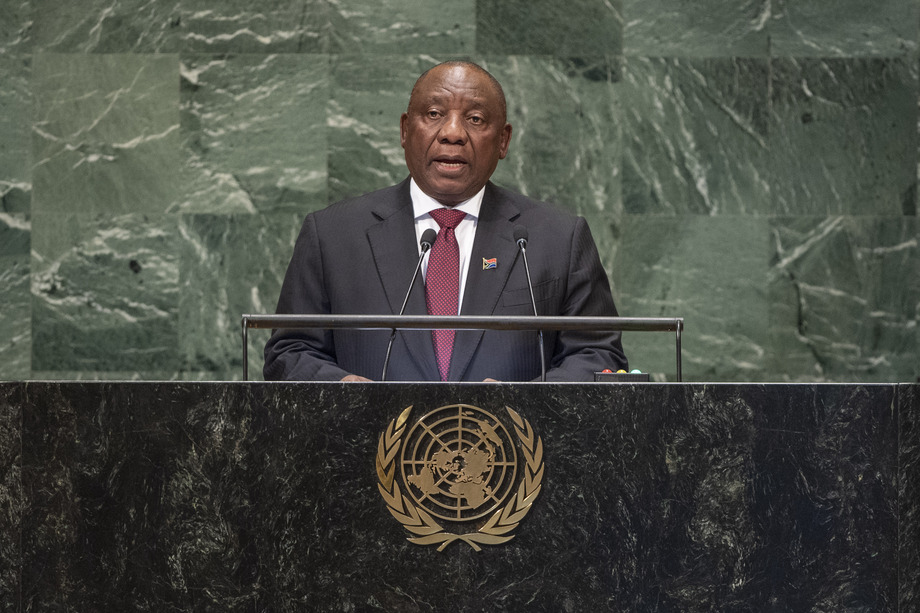 MATAMELA CYRIL RAMAPHOSA, President of South Africa, said nearly a quarter of a century has elapsed since Nelson Mandela stood at the Assembly’s podium, declaring that millions of his people looked to the United Nations “to bring them a life worth living”.  Asking if those hopes have been met, he said the Organization is still called upon to ask what it must do to achieve peace, reconciliation and stability around the globe.  Welcoming the 24 September adoption of a political declaration marking 2019–2028 as the Nelson Mandela Decade of Peace, he said the Organization is obliged to truly become what the people of the world want it to be:  A voice for all, including the poor and marginalized, around the globe.

“During the dark days of colonialism and apartheid, we drew strength, inspiration and encouragement from the United Nations,” he said.  Today, he said, South Africa is making strides in dealing with apartheid’s ugly legacy, including undertaking reforms to ensure that land “belongs to all who work it” and attracting millions of dollars in foreign investment.  As world leaders assemble today, they must commit to forging a more fair, equal United Nations that is better equipped to end the struggles against poverty and discrimination.  Those challenges are most pronounced in Africa, which is “living in the age of youth” and bears a special responsibility to place young people and women at the centre of its affairs.  “It is young people who are fighting the wars that we started” and women who bear the brunt of conflicts, he stressed, underlining the urgency of measures needed to end wars, death, destruction and human suffering.

Emphasizing that commitments to address terrorism and end protracted disputes must be coupled with resources and action, he spotlighted the long‑standing plights of the Palestinian people and Western Sahara, both of whom possess inalienable human rights.  He also called for efforts to address youth unemployment and educational opportunities that are appropriate to the changing world of work.  The potential of the digital revolution must be effectively harnessed to promote social justice as well as human progress, he stressed, also calling for stronger and more global institutions.  Indeed, he said, the United Nations, the World Bank, the World Trade Organization (WTO) and others need to be revamped to better meet the needs of all peoples around the world.  “We must resist any and all efforts to undermine the multilateral approach to trade” which is central to the global economy’s stability and predictability, he stressed, adding that history has demonstrated that no country can prosper alone.

Spotlighting the potential of the 2030 Agenda to tackle those challenges and “turn implementation into impact”, he said African nations are working more closely together to rid the continent of underdevelopment and conflict while promoting the rule of law and human rights.  For example, he said, the recently agreed African Continental Free Trade Area will give rise to a new industrial age in the region.  “Africa has the potential to be the next great frontier for global growth and development” with major investments in education, good governance, health care and large-scale industrial capacity aimed at lifting millions of people out of poverty.  “The youth of Africa are poised to transform their continent,” he said, reiterating South Africa’s determination to always be a force for good, peace, development and progress around the globe.