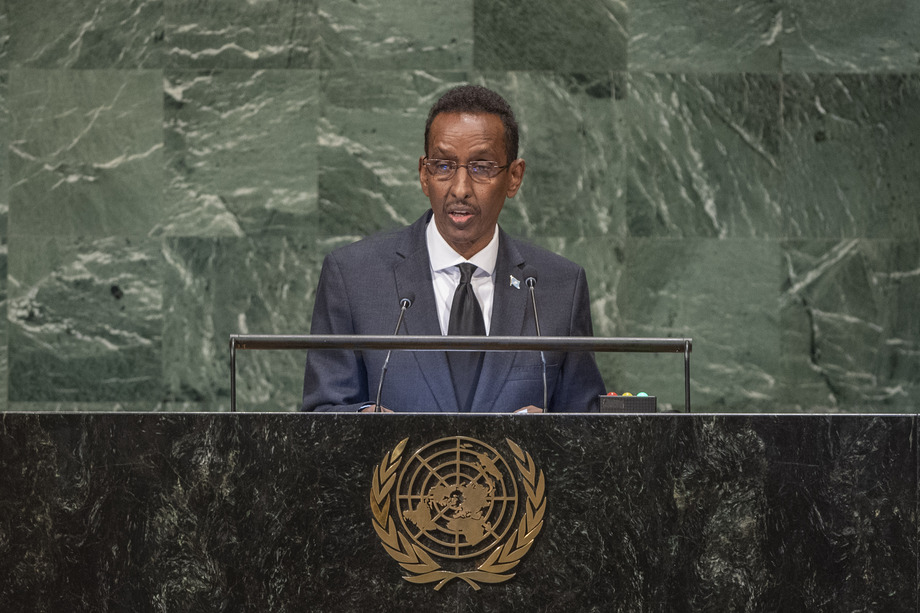 AHMED AWAD ISSE, Minister of Foreign Affairs of Somalia, said that since assuming office a year and a half ago, his Administration has made huge strides in security sector reform and political and economic transformation, yet is mindful of the enormous challenges ahead, particularly to overcome terrorism.  New road networks and supply routes have been opened, liberating towns and villages from Al-Shabab.  Stressing the importance of a multi-faceted security approach, he said the Government and its partners have militarily dismantled terrorist hideouts, while also engaging religious leaders, elders, youth, women and civil society groups to dramatically reverse the twisted ideology of hate and religious intolerance.  Joining Al-Shabab is no longer appealing to young men and women; that group and Al-Qaeda no longer have a ready stream of new and volunteer recruits in Somalia.  Some have accepted the offer of amnesty, denounced violence and surrendered peacefully.  Senior commanders, former sector heads and infantrymen also have surrendered unconditionally, weakening the terror network’s logistical and planning capabilities.  The Government is now working with civil networks to flush out remaining terrorist.

Awareness that sustaining security is a collective responsibility has helped establish effective policing models involving the public, he said, citing plans to gradually transfer security tasks to the national security architecture.   He thanked the African Union Mission in Somalia (AMISOM) and called on the United Nations to lift the arms embargo on Somalia in order to consolidate collective security gains and further support Somali institutions.  “Stronger fighter capacity would enable us to have the upper hand, it would entirely dismantle terrorists, and possibly within a shorter time,” he said.  Every Somali should enjoy the inalienable right to life, freedoms and protections enshrined in the provisional Constitution, he said, noting that a core value is the protection and support of minority groups, communities and persons with special needs.  A prosperous Somalia is only possible when the governance system is effective and based on the rule of law.  Somalia’s quest for inclusive, reformed politics is on the right track, he said, citing the election model adopted by the central Government and federal member states in Baidoa in June 2018.

Turning to economic development and sustainable productivity, he said that tapping into opportunities created by Somalia’s vast natural resources and long coastline will help transform the economy, streamline trade and open new trade routes, while stressing the need to strengthen alliances with partners worldwide.  To achieve the Sustainable Development Goals, Somalia is working towards financial self-sufficiency.  Through the International Monetary Fund (IMF) Staff Monitored Programme domestic revenue reached unprecedented levels.  The Government is now normalizing relations with international financial institutions bringing it closer to debt relief.  Somalia is taking a huge role in achieving economic integration in the Horn of Africa and serving as a mediator to end decades-long conflicts dogging the region to achieve the African Union goal of silencing the guns by 2020.  Towards that end, all economic sanctions on Eritrea should be lifted.

On Agenda 2063, he stressed the need for joint policies that provide lasting solutions for illegal immigration.  “It should no longer be business as usual when year in year out hundreds of young productive men and women are lost to the Mediterranean in search of better living prospects,” he stressed, called it ironical as the world focuses on Africa for its resources, markets and labour.  He expressed hope for better days and prospects for all.  “For Somalia, it is the beginning of a transformation; we have risen anew and fresh.  We are not only optimistic, but we are also motivated,” he said.