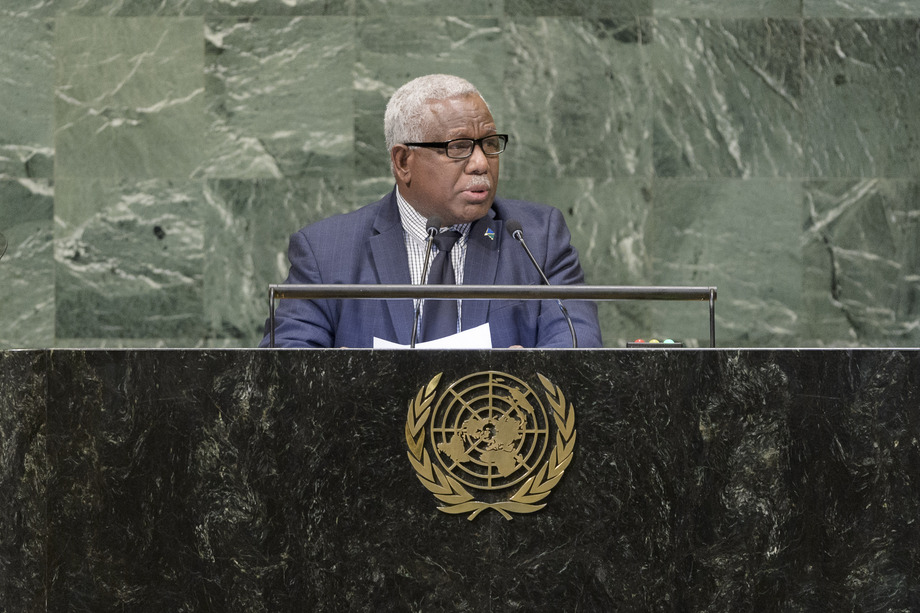 RICKY NELSON HOUENIPWELA, Prime Minister of Solomon Islands, said implementing the Sustainable Development Goals requires a unified global partnership, one which recognizes that together the world can conquer the inequities of today.  However, the very foundation and strengths of multilateralism are currently being challenged and undermined by unilateral posturing and insular policies that have seen some countries reverse their commitments to international agreements.  Yet, the United Nations allows its membership to consolidate collective resolve to achieve progress in all fields.

Citing examples of national progress on reaching the Goals, he said Solomon Islands completed a midterm review of the Samoa Pathway and has met two of three criteria for graduation from the group of least developed countries.  Yet, as a post‑conflict State, his country will require prudent macroeconomic and finance policies to maintain threshold indicators.  Expressing hope the General Assembly will grant Solomon Islands an opportunity to assess the potential impact of graduating from the group, he said a predictable, workable strategy would put the country on a continued upward trajectory.  Calling on the United Nations for support during these processes, he noted with pleasure that a special task force has been established to ensure a smooth transition.

Raising climate change concerns, he called for collective global leadership and strengthened commitment towards the forthcoming twenty‑fourth session of the Conference of the Parties to the United Nations Framework Convention on Climate Change, to be held in Poland.  For its part, Solomon Islands remains committed to transitioning to renewable energy use and is, through partnerships, completing infrastructure projects and cooperating with other nations on a range of development programmes.  Goal‑related efforts also include ocean management, developing an ocean policy and subscribing to the Blue Pacific Initiative, which sets the context for developing regional priorities.

Given the increasingly complex global security threats, he said, working together is more important than ever.  Highlighting progress on the Korean Peninsula, he said efforts must now focus on achieving stability in the Middle East and peacefully settling the Israeli‑Palestinian conflict.  Noting the Pacific Islands Forum’s outcome document on the region’s shifting security landscape, he expressed support for United Nations peacekeeping operations.  Having benefited from the Peacebuilding Fund in 2017, Solomon Islands has facilitated dialogue with stakeholders on key issues.  Recognizing the ever‑changing global security situation, he reiterated a call to reform the Security Council, adding that the small island developing States must have a voice through a dedicated non‑permanent seat.

Turning to other threats, he said action is urgently needed to address non‑communicable diseases, which cause almost 80 per cent of all deaths in the region and are placing a heavy burden on health‑care systems.  On other issues, he called for the United Nations to recognize Taiwan as a Member State and pledged his Government’s commitment to work with Indonesia on areas of mutual interest, including human rights concerns in Papua and West Papua.  To address national challenges, the Government passed anti‑corruption and whistle‑blower‑protection legislation and is committed to holding free and fair elections in 2019.  “Without the United Nations, as a small island country, we will not be able to be heard,” he said, expressing ardent support for multilateralism.  “The United Nations has flaws, but Solomon Islands continues to feel the impact of the power of working together on global issues.”