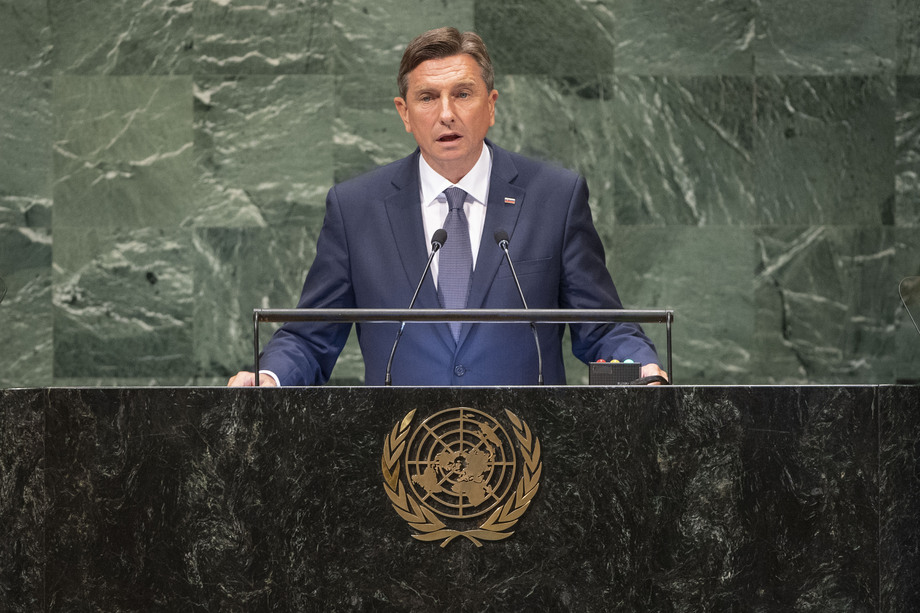 BORUT PAHOR, President of Slovenia, said that the case for multilateralism is clear.  “No State, no nation will gain if it only strives to assert its own interests,” he continued.  Slovenia stands firm in defence of multilateralism with the United Nations, committed to the multifaceted system based on shared values, rule of law and human rights.  Respect for international law and rule of law is a precondition to peace and security.

As a country in the Western Balkans region, Slovenia stresses the importance of international law and the judgements of international courts relating to the region’s reconciliation process, he said.  Recognizing and accepting historic facts no matter how painful are the basis for stability and progress.  “The Western Balkans are in need of both,” he emphasized, expressing support to the Euro‑Atlantic membership perspective in the region.  Solutions must be wise, comprehensive and highly responsible, rather than cause a domino effect and negative impact.

The United Nations has been instrumental in promoting respect for human rights and fundamental freedoms worldwide, he said.  No rights of States, no emergency, no political reasons can ever excuse violations of human rights.  He expressed hope that the United States, a traditional promoter and supporter of human rights, will remain committed to this ideal.  War, violence, extremism and terrorism always present grievous assaults on human rights.  He called on all to work together to foster a culture of mutual respect for diversity.

He said that impunity represents one of the major obstacles to the prevention of grave and systematic violations of human rights.  “Ending impunity is essential for the war-torn society to recover,” he added, expressing strong support for the International Criminal Court.  He noted the conflicts in Syria, humanitarian disasters in Yemen and Afghanistan, growing regional tensions in the Sahel, continued violence in Libya, and the refugee crises in Myanmar and Venezuela.  “We need to face these crises with determination,” he said.

Slovenia supports solving the pressing proliferation issues through diplomatic means, he said, reiterating support to the Joint Comprehensive Plan of Action.  He underscored that special attention should be paid to the prevention of sexual abuse and exploitation, including in armed conflicts.  Sexual and gender‑based violence presents a barrier to women’s participation in peace and post‑conflict activities.  He expressed support for the 2030 Agenda and working together in cooperation and partnership to achieve myriad global goals.