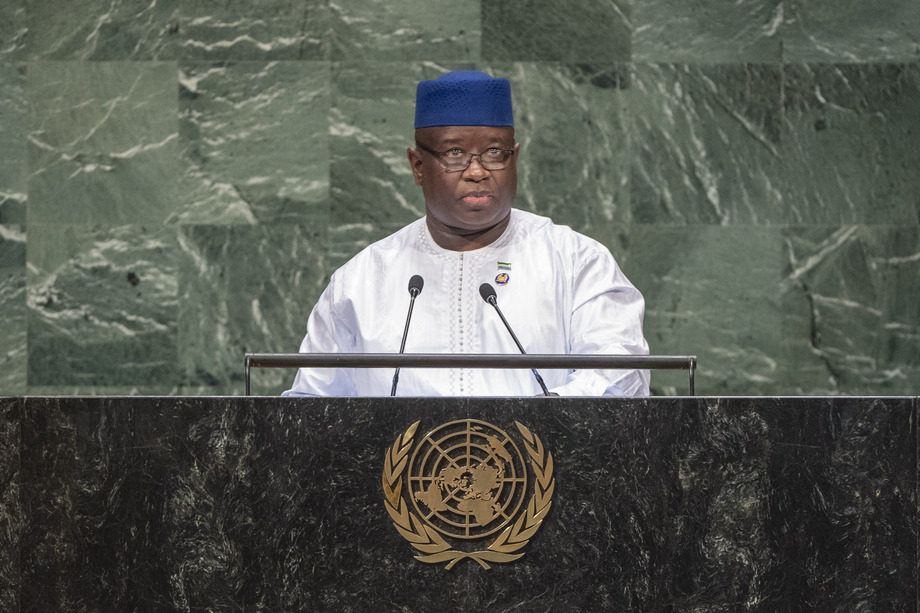 JULIUS MAADA BIO, President of Sierra Leone, said his country’s commitment to the United Nations Charter and the building of a more secure world resonates with the theme of this year’s General Assembly debate.  Sierra Leone recently demonstrated its commitment to democratic governance with yet another peaceful transfer of power from an incumbent political party to the opposition, he said, thanking the international community for facilitating and monitoring the electoral process.  His country stands ready to maximize its potential for development and he called on bilateral partners to help deliver on the expectations of the people of Sierra Leone.

Since the General Assembly’s 2005 pledge to strengthen the United Nations and enhance its authority and efficiency, some gains have been made, he continued.  However, the need for reform remains urgent and Member States must work to redress the historical inequalities done to African countries.  Present geopolitical realities are compelling for a comprehensive reform of the Security Council, he said, pointing out that Africa is the only region without permanent representation and underrepresented in the non-permanent category.  The United Nations will be undemocratic and discriminatory if Security Council reform is not addressed.

Sierra Leone is in the opening stages of adopting renewable energy, he said, pointing to the need for increased public and private investment in the industry.  Its target of 60 per cent renewable energy capacity by 2030 is practicable, especially to generate growth in rural areas.  Investment in renewable energy will have a multiplier effect in helping the country achieve Goal 7, he said, adding that Sierra Leone has a bold vision for science, technology and innovation.

He highlighted how Sierra Leone is undertaking extensive reform to create a peaceful, just and inclusive environment.  The Government has launched a free education programme and is retooling its governance and financial and health‑care institutions.  On health care, he called on international partners to help invest in critical institutional, technical and human resources and to help improve the country’s preventative health infrastructure.  Welcoming the United Nations renewed commitment to conflict prevention and acknowledging the relevance of the global framework to prevent, combat and eradicate the illicit arms trade, he also called on the international community to help consolidate Sierra Leone’s development efforts.