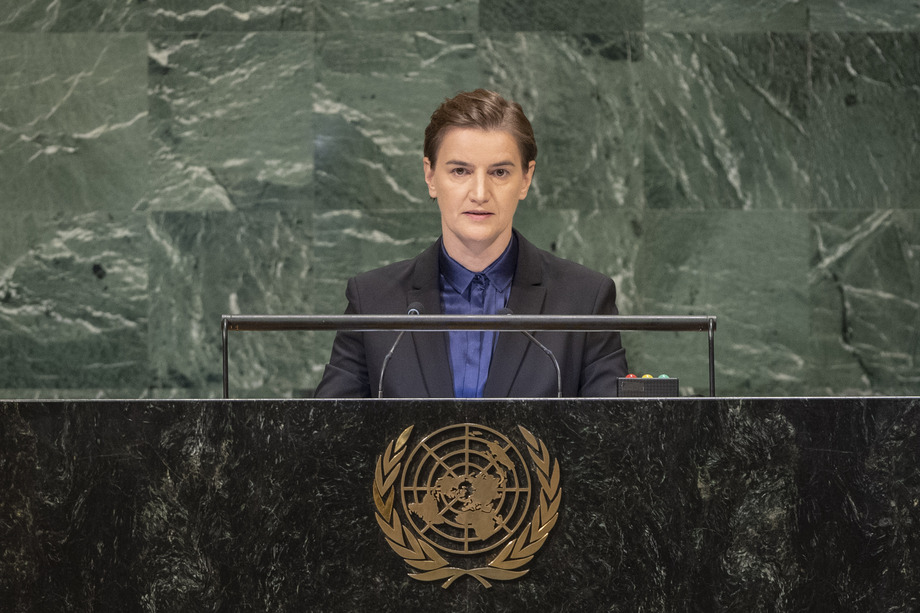 ANA BRNABIĆ, Prime Minister of Serbia, saying at the outset it was a “pleasure to see a fellow stateswoman presiding over this important institution”, turned to a range of global challenges that require targeted action.  Climate change, migration, terrorism and the rise of populism must be addressed first by individuals, then at national, regional and global levels.  Stating she is often asked why Serbia would strive to join the European Union when others are leaving it, she answered that its basic value, like that of the United Nations, is peace.  The European Union is important to forging sustainable peace, stability and prosperity in the Balkans, “this troubled region of the world that used to be known as the powder keg of Europe”, she said.

Expressing pride in Serbia’s recent accomplishments, she pointed to macroeconomic stability, unemployment cut in half, and one of the highest economic growth rates in Europe, with ever greater foreign investment.  Embarking on comprehensive public administration reform, she said her Administration believes “we are there to serve, and not to be served”.  The country is strengthening the rule of law through reforming the judiciary, working with media, establishing honest dialogue with civil society organizations and building institutions to fight organized crime and corruption.

Strongly emphasizing the importance of regional cooperation and security to her country, she acknowledged that the area has always been known for and proud of “our excessive emotions, sacrifices, poetic struggles, traditional animosities”.  However, today Serbia is trying to leave that in the past and become more reasonable, pragmatic, proud of its victories rather than losses, and to build unexpected friendships.  Turning to the issue of Kosovo, she pointed out that less than half of Member States recognize the unilateral declaration of its independence, while more than half, representing 5 billion people, refuse to recognize its illegal secession.  Serbia is trying to “close Pandora’s Box”, which was opened a decade ago with this unilateral declaration of independence.

Underlining Serbia’s commitment to peace and that it is “behaving as an adult”, she provided examples of how the country had advanced that concept.  While Serbia signed and implemented the Brussels Agreement more five years ago, Priština had signed but has not yet implemented the accord.  Although dialogue with Priština was “sometimes hopeless and wasteful”, she stated Serbia will remain committed to finding a compromise that will ensure sustainable peace, prosperity and a brighter future for all in the region.  She asked the international community for undiluted and consistent support for Serbia’s efforts.

Turning to youth, she said the entire international community must invest more than ever in education to create more innovative, braver, more free‑thinking individuals who will then create a world that is freer, fairer and even more fun.  As a country with many young people, Serbia makes it an absolute priority to support them, creating a system and institutions to enable them to reach their full potential.