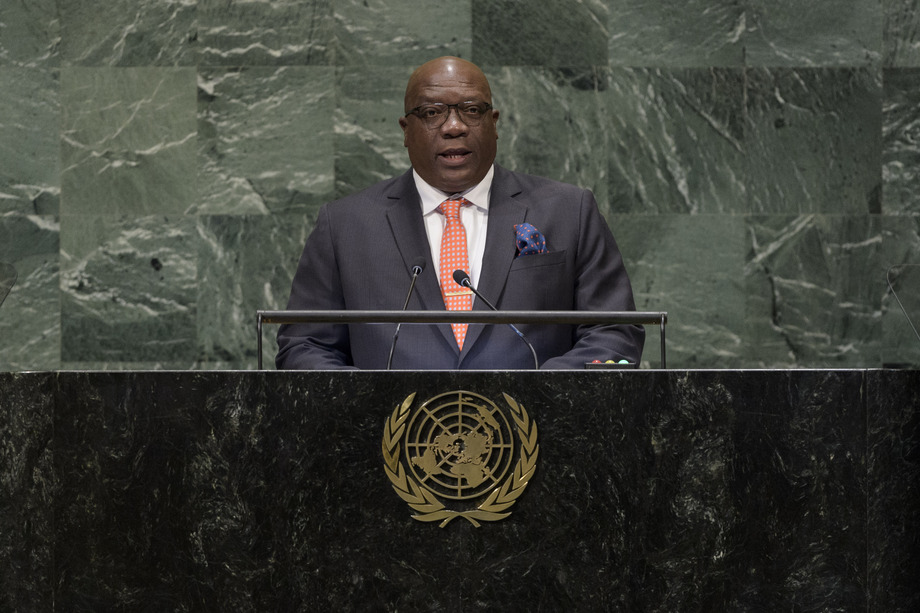 TIMOTHY S. HARRIS, Prime Minister of Saint Kitts and Nevis, called for urgent reforms to make the United Nations more responsive to the needs and concerns of Member States, particularly small island developing States.  Though it is the smallest country in the Western Hemisphere, Saint Kitts and Nevis has made significant progress in the areas of poverty alleviation, free education and affordable health care.  All those gains can be erased, however, by climate change, he said, calling on those States that participated in the United Nations high-level pledging conference following hurricanes Irma and Maria to make good on their outstanding commitments.  States must also commit to reducing harmful emissions into the environment, he said, expressing regret that nations like his must pay dearly for a debt they did not create.

Emphasizing that climate change poses an existential threat to small island developing States, he wondered when the United Nations will help the Caribbean region to address the prevalence of sargassum seaweed, which is having an impact on fisheries and tourism.  Welcoming funding mechanisms to help highly vulnerable small island developing States, he said they must be transparent and easily accessible, with donor countries fulfilling their commitments.  That said, the international community cannot claim to help those States, on the one hand, then classify them as middle- and high‑income countries based on archaic financial models that deny them critical development assistance and hinder investment financing.

He went on to say that an unfair financial architecture, including the threat of de‑risking and loss of correspondent banking relationships, is thwarting development in small States.  That is compounded by the blacklisting of countries forced to divert scarce resources to comply with the onerous demands of the European Union Council’s Code of Conduct Group, among others.  It is unfair to subject some countries to evaluation and ever‑fluctuating standards while others are exempt, he said, calling on the United Nations to bring the plight of small States like his to the forefront of international debate and end such discriminatory practices.

He added that the Caribbean is suffering from an increase in crime related to the trade in small arms, light weapons and drugs.  Such weapons flow into the region, where they are not manufactured, and they are linked to an insatiable appetite for drugs in the West, he said, calling for international assistance to address that scourge and emphasizing his country’s commitment to the Arms Trade Treaty.  Turning to health issues, he said eight out of 10 deaths in the Caribbean can be attributed to non‑communicable diseases, with hypertension being the leading risk factor for death.  “We are facing [a non‑communicable diseases] crisis in our region,” he said, reminding the Assembly that non‑communicable diseases and climate change are two sides of the same coin — “symptoms of the failure of the extant development paradigm”.

Affirming his country’s commitment to the 2030 Agenda, he said Taiwan should be given space to participate in international dialogue and development strategies.  He called for the normalization of relations between Cuba and the United States, as well as peaceful dialogue to resolve rule of law and democracy issues in Venezuela.