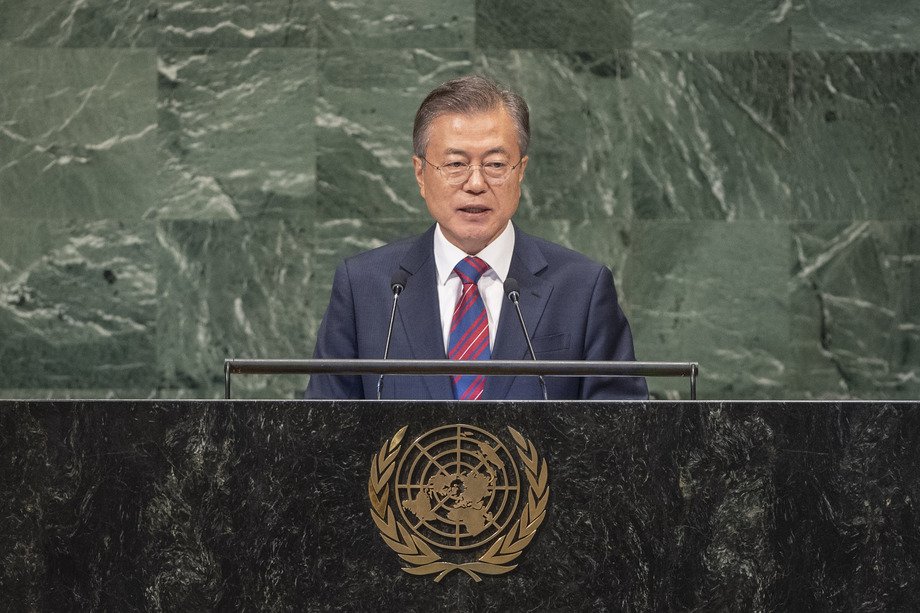 MOON JAE-IN, President of the Republic of Korea, declared that “something miraculous” had taken place on the Korean Peninsula.  For the first time in history, the leader of the Democratic People’s Republic of Korea crossed the Military Demarcation Line to visit Panmunjeom.  A historic summit between the United States and that country was also held on the Sentosa Island in Singapore.  He noted that he had worked with Chairman Kim Jong Un to remove “the shadow of war” and resolved to usher in an era of peace and security.  At the summit, the two sides agreed to work towards achieving complete denuclearization on the Peninsula, ending hostile relations and establishing a permanent peace.  President Donald J. Trump and Chairman Kim gave hope to those who desire peace around the world.

The Democratic People’s Republic of Korea dismantled its nuclear test site in Punggye-ri under the observation of the international community, he noted.  The United States and the Republic of Korea suspended large-scale joint military exercises and built trust.  Last week in Pyongyang, he met Chairman Kim for the third time and reached an agreement once again to turn the Peninsula into a land of peace, free from nuclear weapons and threats.  Chairman Kim also expressed his commitment to permanently dismantle the missile engine test site and launch platform in Dongchang-ri under the observation of the international community.  He also expressed his willingness to continue to take additional denuclearization measures, including the permanent dismantlement of nuclear facilities in Yongbyon as the United States takes corresponding measures in the spirit of the Sentosa Agreement.  This was just the beginning, he underscored, and he asked for the continued support and cooperation of Member States on the journey towards complete denuclearization and permanent peace.

It is now the international community’s turn to respond positively to the new choice and efforts of the Democratic People’s Republic of Korea, he said.  Chairman Kim must be assured that he has made the right decision in committing to denuclearization.  The role of the United Nations is crucial, and the Secretariat has continued its efforts for dialogue and engagement, including the invitation of the Democratic People’s Republic of Korea colleagues to international conferences.

The process of working towards denuclearization and establishing peace on the Peninsula is a process that also builds peace and cooperation in North‑East Asia, he said.  That region is home to one fifth of the world’s population and a quarter of the global economy.  However, regional conflicts stand in the way of pursuing broader cooperation.  Work will begin on resolving conflicts in North‑East Asia, starting from the Korean Peninsula.  On 15 August, he proposed the creation of an East Asian Railroad Community, which would involve six North‑East Asian countries and the United States.  The European Coal and Steel Community, which gave birth to the creation of the European Union, is a living example of what this kind of initiative can achieve.  The Community will be able to serve as a starting point for the creation of an energy and economic community, and lead to a multilateral peace and security architecture in North‑East Asia.

In September, his Government announced its vision of an “inclusive nation” based on a people‑centric governing philosophy, he said.  It also increased its financial aid for refugees five times in the last five years.  Starting in 2018, it is providing 50,000 tons of rice every year to developing countries suffering from severe food crises.  It is also working to realize gender equality in a tangible way, ensuring that violence against women is dealt with severely.  The Republic of Korea witnessed first-hand the experience of comfort women, who were victims of the suffering inflicted by the Japanese military, he said, adding that his Government will actively participate in discussions among the international community on women, peace and security.

The significance of the United Nations goes beyond any international organization, he said, noting that on 17 September 1991, all 159 Member States unanimously adopted the resolution for joint accession by the Republic of Korea and the Democratic People’s Republic of Korea to the Organization.  The representatives of both pledged that although they would start as separate members, they would eventually become one through reconciliation, cooperation and peace.  After 27 years, both are realizing the pledge they made that day and are proving to the international community that when they come together, they have the means to establish peace.