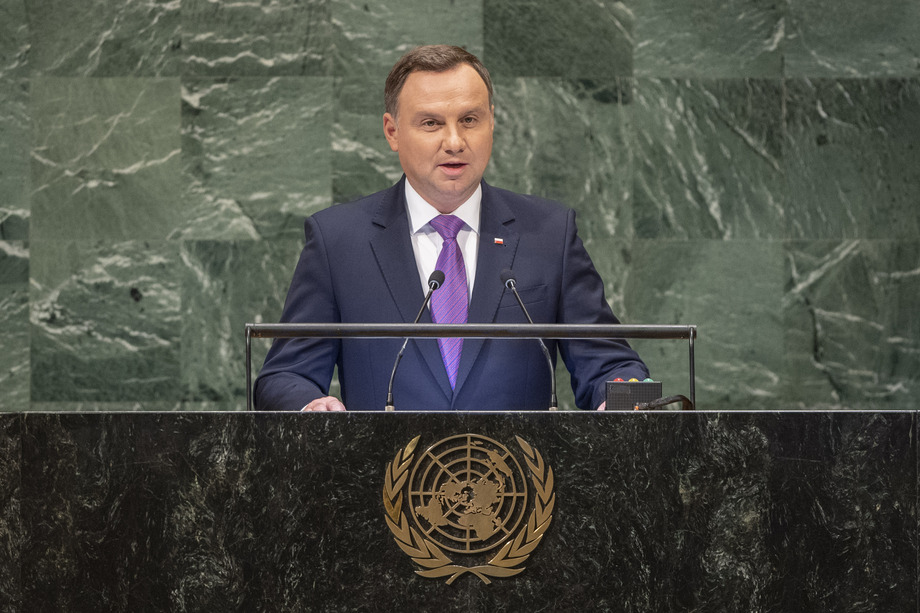 ANDRZEJ DUDA, President of Poland, noted that his people are celebrating the centenary of regaining independence, stating Europe will not be just and safe without a sovereign Poland.  Elsewhere, he said, the modern world is full of threats, but dynamic developments on the international situation offer reasons to be hopeful, such as ongoing de-escalation of tensions on the Korean Peninsula.  However, problems remain unresolved, and require the cooperation of as many countries as possible.

Only cooperation among countries within the rule-based global order can resolve frozen conflicts and prevent the emergence of new ones, he said.  Adding that such order requires strong institutions to enforce it, he said no violation of the law can be justified.

Stating that the sovereign equality of States as referred to in Article 2 of the United Nations Charter would be Poland’s priority in its second year of membership on the Security Council, he pointed to a “negative multiculturalism” that aims for the concert of Powers, division into spheres of influence and deciding the fate of others.  “Europe and Poland were often the victims of this kind of multiculturalism” he said, calling for the multiculturalism of equal States and free nations, not of usurpation and hierarchy.

States with an advantage of potential and power should not deprive others of their equal right to independence, he continued.  Saying weaker countries should be given enhanced opportunities that may involve additional voting powers or representation in decision-making bodies, he called for reform of the Security Council to expand the field of equal rights, and reform of the European Union to its origins, which “emerged from the concept of positive multiculturalism, and which today are repeatedly violated”.

Multilateralism must serve the system of values reflected in the United Nations Charter, he said, because when there is a temptation to a concert of Powers, global stability is undermined.  The sovereignty of a State should be fundamentally linked to responsibility for the respect of norms for the common good.  He stated Poland attaches particular importance to human rights, bidding for membership in the United Nations Human Rights Council for 2020-2022, and will return to active participation in peacekeeping missions.  Poland is involved in the process of stabilization and building lasting security on the Korean Peninsula and is ready to actively engage in international peace rebuilding in the Middle East.  However, he felt the duty to alert the international community of threats to world peace resulting from frozen conflicts, occupation and shifting of borders by force, which is happening in Eastern Europe.  “The international community must not allow a return to “business as usual”, and the actions of aggressors should be confronted with a relevant response” he said.