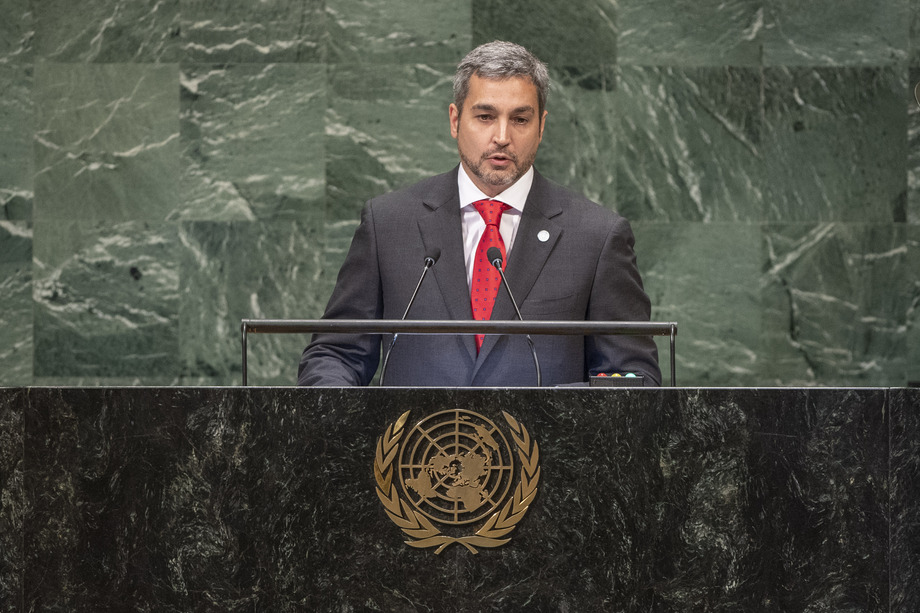 MARIO ABDO BENÍTEZ, President of Paraguay, said that in an increasingly interconnected world, the global community must collectively rise to challenges, with the General Assembly representing the voice of all nations.  However, the Security Council must become more inclusive and democratic to better serve the world and future generations.  Supporting the Secretary‑General’s broad reform efforts across the Organization, he said an efficient and transparent United Nations must play its crucial role in helping Member States to implement the 2030 Agenda, particularly landlocked developing countries.  Indeed, world leaders must take up the fight against poverty, addressing it as a human problem and not simply an economic indicator, he said, providing examples of how Paraguay is tackling poverty‑related challenges by widening access to education and boosting collective prosperity, with a focus on youth, persons with disabilities and women.

Turning to global challenges, he said terrorism and transnational crime continues to plague many nations.  For its part, Paraguay launched a campaign to combat the drug trafficking and continues to work with allies to crush crime in all its forms.  To address global climate change challenges, the world faces a crucial decision — to stop it now or to deny it and continue to worsen the situation.  States committed to the Paris Agreement on climate change must work to implement it.  Doing so is part of Paraguay’s strategic development vision, as is fighting corruption and impunity while strengthening institutions.

Highlighting national achievements and concerns, he said Paraguay has one of the most open economies and supported economic integration.  However, some countries in his region are dealing with dictatorships.  Still, every nation faces specific challenges while moving towards sustainable development, with vulnerable States requiring special attention, including landlocked developing countries, who needed targeted efforts to boost trade.  He urged States, particularly trading partners and transit countries, to consider those needs.  Turning to issues of security, he said Paraguay supports the Arms Trade Treaty and the Convention on the Prohibition of the Use of Nuclear Weapons and is committed to United Nations peacekeeping operations.  Paraguay also considers that Taiwan should be included in the United Nations membership.

As the world is poised to adopt two major compacts, on orderly migration and on refugees, he said Paraguay has been involved in both important processes.  The United Nations must continue playing a major role in ensuring full respect for human rights and fundamental freedom for all people.  The 2030 Agenda is the beginning of a change that will impact present and future generations.  The success of the agreement will depend on how committed States are, he said, appealing to the world alliance to work towards achieving all the 2030 Agenda goals and targets.

Given the current international landscape, pockmarked with political uncertainty and a volatile economy, he said all States must forge a collective drive to tackle challenges.  At this point, he said, either each State can try to impose itself on others and hope to get the best it can, or the world can work together towards common goals with multilateral instruments and through cooperation.  To achieve that, efforts must be unwavering in committing to meet the many challenges of the entire human race, he concluded.