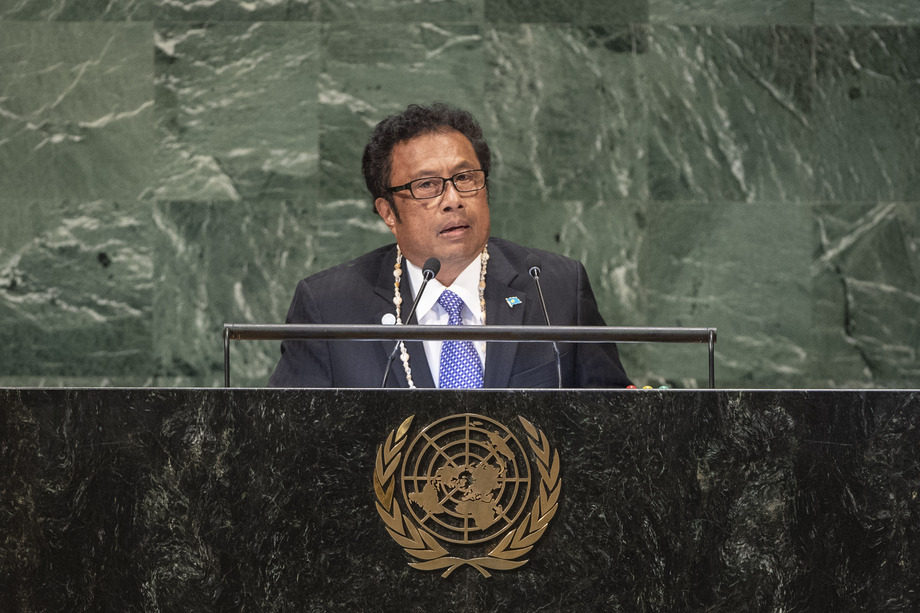 TOMMY ESANG REMENGESAU, JR., President of Palau, expressed his commitment to promoting peaceful, equitable and sustainable societies both at home and internationally.  The Sustainable Development Goals are the most important framework for achieving those objectives, he said, noting that while each country’s development path will be unique, all will be interlinked and reinforce one another.  Palau’s core priorities include health, oceans and climate change, through which the rest of its development objectives and durable partnerships will be realized.

Recalling that Palau declared 2018 as the Year of Good Health, he said it is already implementing several awareness-raising events to cultivate healthier lifestyles and respond to the deadly challenge of non-communicable diseases.  Expressing regret that Palau is ranked among the world’s top 10 most obese nations — while people in other parts of the world are dying of hunger and poverty — he said his country’s citizens are in effect dying from overeating and poor diets.  That crisis has prompted a strategic shift in focus at the country’s Ministry of Health, he said, adding that it is aimed at bolstering preventive services to improve health and livelihoods.  “We are encouraging a return to traditional diets and increasing our local food production, as much of the problem stems from the importation of unhealthy junk food,” he said.

Turning to the health of the ocean — which is Palau’s livelihood, culture and identity — he said the achievement of Sustainable Development Goal 14 is a top priority for his country.  “Our environment is our economy, and our economy is our environment,” he said, noting that preserving coral reefs and abundant fisheries will ensure that the tourism sector grows and food security is maintained.  For those reasons, Palau has moved aggressively to implement is National Marine Sanctuary — a “no-take zone” covering 80 per cent of its exclusive economic zone.

Expressing pride in all those domestic efforts, he said international action nevertheless remains critical.  Welcoming the recent launch of the high-level panel for a sustainable ocean economy, he also expressed hope that the ongoing intergovernmental conference on the conservation and sustainable use of marine biological diversity beyond areas of national jurisdiction will result in a strong outcome document to complement national actions.  Also expressing Palau’s strong support for the Paris Agreement, he underscored the need to build the resilience of vulnerable countries to the impacts of climate change as an urgent global priority.

Palau’s own climate change policy framework seeks to undertake effective adaptation measures, he continued, while also strengthening the country’s capacity to prepare for and minimize disaster risks and mitigating climate change through low-carbon emission clean energy initiatives.  Small island nations are making great strides in transforming their energy systems, and Palau for its part is committed to increasing its supply of renewable energy by harnessing solar power and switching 45 per cent of its electricity to renewable sources by 2025.  “Smokestacks have no place in paradise,” he said, also outlining new laws that have modernized the country’s electricity sector and put in place enabling frameworks to trigger investments in solar power.