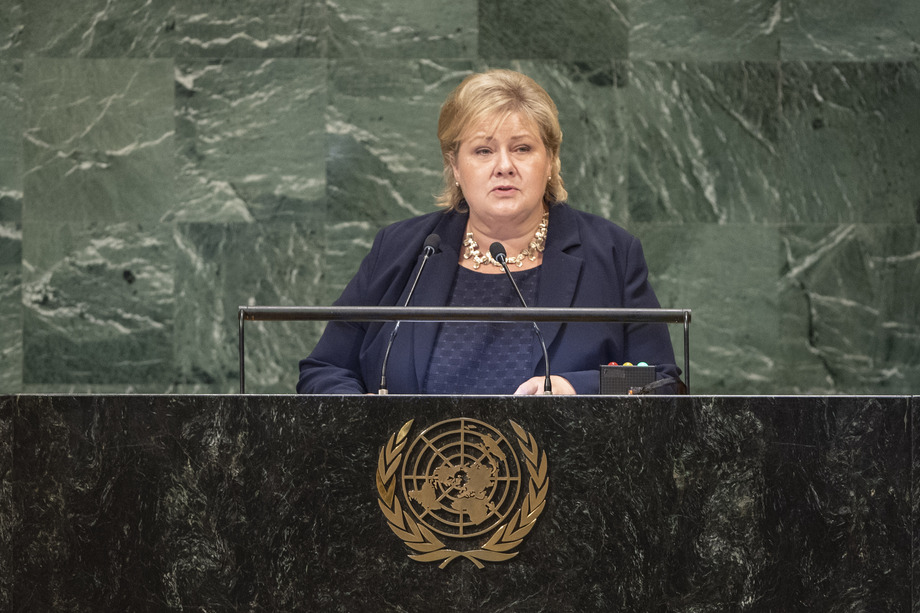 ERNA SOLBERG, Prime Minister of Norway, said the job of saving future generations from the scourge of war, which the United Nations set out to fulfil, has not been done.  As the 17 Sustainable Development Goals recognize that global and national challenges are interlinked, it is clear that “we can achieve more when we act together”, she said, highlighting gains made in halving extreme poverty levels and reaching other development benchmarks.  However, globalization has not been equally beneficial for all and efforts must made to reform trade norms and to modernize rights, rules and responsibilities to fit the current global economy, she said, adding that free trade promotes winners, while protectionism does not.

Turning to security concerns, she raised alarm at the Syrian conflict.  Emphasizing that the Security Council must be able to act, she pointed out that banned weapons have reappeared and respect for human rights and international law has been undermined.  Rules and principles are in jeopardy in Europe, as Ukraine’s recognized borders must be restored.  Moreover, violent extremism, conflict and instability are driving crises that affect all nations.  Norway supports the International Criminal Court as an independent institution and believes that security is closely linked with sustainable development.

In that vein, she recommended boosting trade and job creation while building capacity for generating domestic revenue and strengthening public service delivery.  Conflict can reverse years of social and economic progress, so prevention, peacekeeping and disarmament are vital if the world intends to achieve the Sustainable Development Goals.  On the 2030 Agenda, the goals are linked.  For instance, achieving economic goals will make funding available to foster further progress on other objectives.

“But, we have no time to lose,” she said.  “Sustainable change cannot be brought about overnight.  National ownership is critical, but civil society, the private sector, trade unions and the scientific community all have a catalytic role to play.”  For its part, Norway has played an active role in promoting many of the 2030 Agenda goals and targets, she said, providing a list of examples, from funding education initiatives to establishing the High-level Panel for a Sustainable Ocean Economy, aimed at promoting science-based decision-making in the fields of ocean economy and management.

As a strong supporter of the United Nations, she said, Norway is a large financial contributor and works with partners from many regions on promoting sustainable development.  Norway also promotes Security Council reform with a view to making it more transparent and representative, she said, noting that her country will continue to seek common solutions to challenges faced by all.