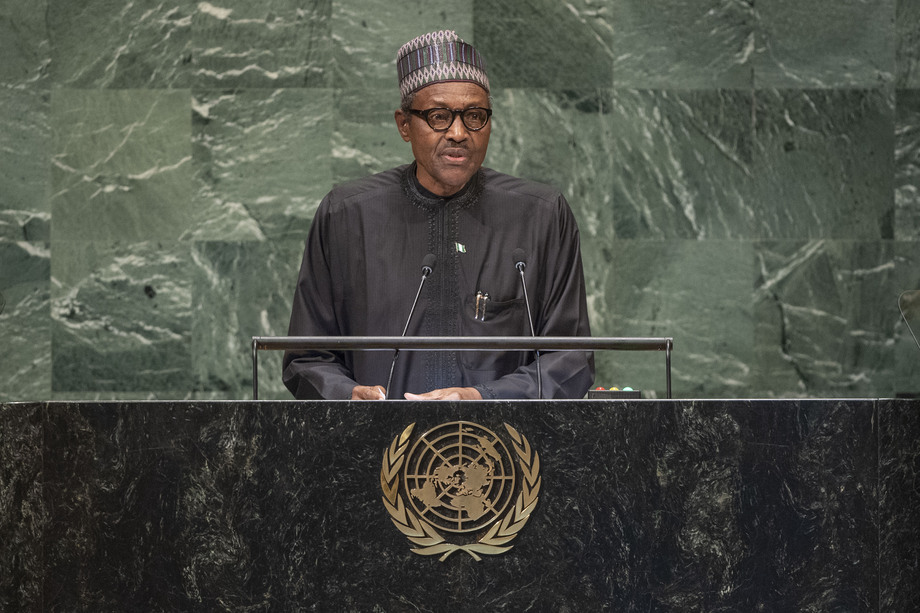 MUHAMMADU BUHARI, President of Nigeria, said Africans took pride in the way former United Nations Secretary-General Kofi Annan served humanity in an exemplary manner.  The international community is witnessing positive results from bilateral and multilateral efforts to address conflicts and threats to world peace, he said, pointing to recent commitments by the United States and Democratic People’s Republic of Korea.  However, other crises have deteriorated.

The international community must strengthen its resolve to combat ethnic and religious cleansing everywhere, including Myanmar, he said, where Rohingya refugees must be able to return to their homes with guarantees of security and citizenship.  Carnage in Syria and Yemen continues unabated and he called for negotiated political solutions to those crises.  The situation in the Middle East is worsening and the humanitarian crisis in Gaza is the result of unrestrained use of power.  He reaffirmed support for a just two-State solution to the Israeli‑Palestinian crisis.  Terrorist insurgencies continue to affect the Sahel and Lake Chad regions, increasingly fuelled by the international Jihadi movement.

He said irregular migration entails avoidable loss of lives and strains all countries affected by migration flows.  He welcomed the successful conclusion of negotiations on the first-ever Global Compact for Safe, Orderly and Regular Migration and looked forward to its adoption later this year.  Climate change is contributing to irregular migration and negatively impacting the livelihood of those around the Lake Chad region, leading to instability in the subregion.

Turning to corruption, he noted that illicit flows of funds across borders negatively impact the stability, peace and economic prospects of millions of people in developing countries.  Corruption deprives Governments of resources to provide meaningful livelihoods to their populations.  It is in the collective interest of all States to cooperate in tracking illicit financial flows, and investigate and prosecute corrupt individuals.

Stressing that current challenges can only be addressed through multilateral cooperation and concerted action, he reiterated the call for strengthening the United Nations and speeding reforms of the Security Council, with expanded membership in line with prevailing international consensus.  Nigeria is mobilizing the human and material resources to achieve United Nations goals, including those outlined in the 2030 Agenda for Sustainable Development.