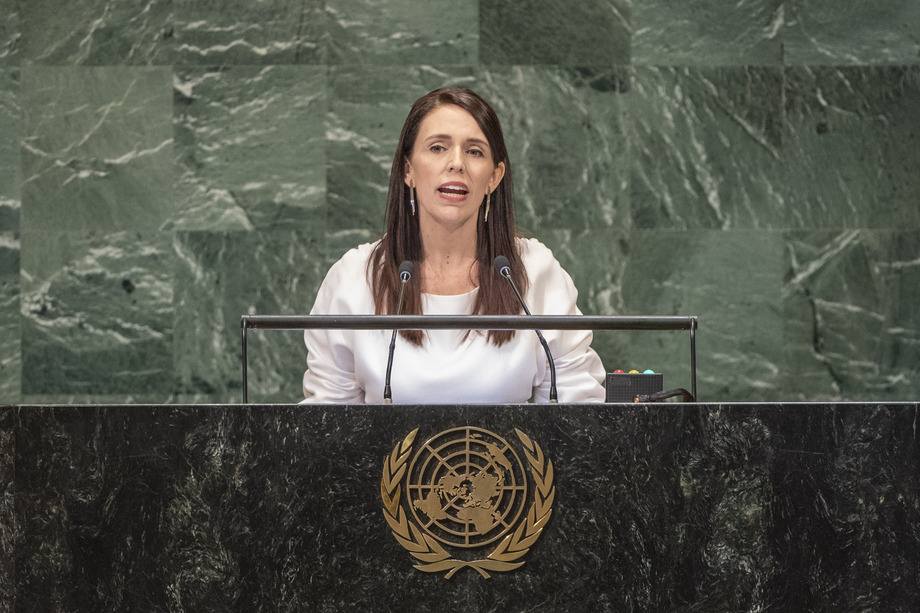 JACINDA ARDERN, Prime Minster of New Zealand, said that New Zealanders’ empathy and strong sense of justice is matched by their pragmatism.  Regardless of its geographic isolation, New Zealand sees itself as a member of the international community, a community whose heart is in the United Nations.  She urged that the Organization’s founding principles not be consigned to the history books, noting that the need for multilateralism and collective action has never been greater.  States are united by the positive and negative effects of globalization, and amid unprecedented economic growth there still exists a growing sense of insecurity.

It is not surprising to witness a global trend of young people showing dissatisfaction with political systems, she noted.  The world now has a generation that will grow up more connected than ever and unsure if jobs they are training for will exist in 20 years.  This is a borderless generation, one that is calling for responses to challenges such as climate change.  Two weeks ago, at the Pacific Islands Forum, climate change was declared the single biggest threat to security in the Pacific.  While action on climate change remains optional, the impact of inaction is not.  Any disintegration of multilateralism on the matter is catastrophic.

She also stressed that while international institutions are not perfect, they can be fixed, calling on States to rebuild and recommit to multilateralism.  There is a need to rediscover the shared belief in the value of connectedness.  International trade, for instance, is helping millions out of poverty while at the same time some see their standard of living sliding.  The answer to the problem is not protectionism, she assured, urging States to ensure that the benefits of trade be distributed fairly across societies.  It is incumbent on States to build productive, sustainable and inclusive economies.

New Zealand has set itself the ambitious goal of becoming the best place in the world to be a child, she said, adding that focus on nurturing the next generation must be matched with concern over the environment it is inheriting.  The Maori community in New Zealand encapsulates this concern through the belief that people are entrusted with the environment and thus have a duty to protect it.  The race for economic growth and wealth will make all people poorer if it comes at the cost of the environment.  Meeting these challenges calls for United Nations reform, she said, expressing support for the Secretary‑General’s efforts aimed at making the Organization more responsive and effective.  It is up to Member States to drive this change.

In an increasingly uncertain world, it is more important than ever to remember the core values of the United Nations, she emphasized, voicing her surprise at the need to have to recommit to gender equality.  She said she will never celebrate the gains made by women in New Zealand while internationally other women and girls experience a lack of the most basic of opportunities and dignity; “me too” must become “we too”, she stressed.  States face a long list of demands, and in the face of isolation, protectionism and racism they must look outward in the spirit of kindness and collectivism.  New Zealand remains committed to do its part to build and sustain international peace and security and to defend an open, inclusive and rules‑based international order based on universal values.