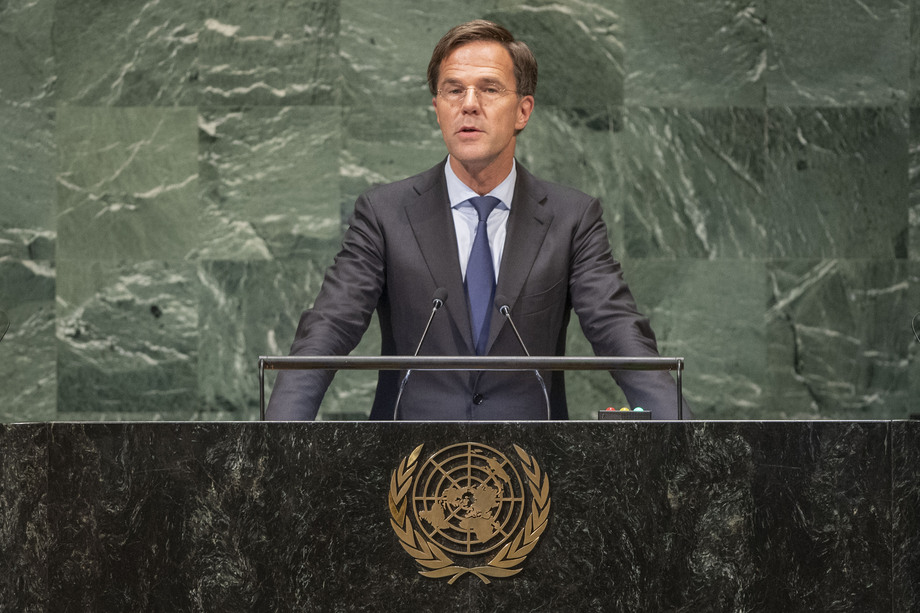 MARK RUTTE, Prime Minister of the Netherlands, recalled the late Secretary-General Kofi Annan’s legacy of hope and the firm belief in progress as a unifying theme in human history as in the Millennium Development Goals.  Taking his legacy forward, he said:  “We have to make the Sustainable Development Goals and the Paris Agreement a reality.”  He reiterated his commitment to international cooperation, pointing out that the Netherlands have it enshrined in article 90 of their Constitution.  Stressing that multilateralism is not optional, he underlined the need for a transnational outlook to master current challenges, noting that there is no conflict between multilateralism and national interests.  On a different note, he said that the downing of the flight MH17 remains an open wound for the Netherlands and all grieving nations concerned, appreciating the support of the international community as expressed in Security Council resolution 2166 (2014) and pointing to their resolve to uncover the full truth, serve justice and accept responsibilities.

He regretted the fact that even though the rules-based multilateral order brought great things for many people, this is not the case for many others.  While acknowledging that the system is not perfect, he pointed out that compromise is being rejected in favour of polarization and perceived self-interest.  He voiced his concern about rising repression, human rights violations and shrinking freedom worldwide, citing Syria as a consequence of a paralysed multilateral system.

On the Action for Peacekeeping agenda of the Secretary-General, he urged to keep the instrument up-to-date as peacekeeping is at the heart of the United Nations and its reforms will make its missions more effective.  “Supporting change is not a free lunch”, he said, noting that the Netherlands were the first Member State to announce funding for a reformed resident coordinator system raising the efficiency of the United Nations development system.  He said that he transferred the intellectual property rights of the Dutch Travel Information Portal to the United Nations, thus allowing access to all Member States to the system mapping the travel movements of terrorists and organized crime syndicates.  On sexual exploitation, abuse and harassment committed by Organization staff, he underscored that this is unacceptable and there must be no exceptions, quoting the Secretary-General’s zero-tolerance policy.  Victims must be heard and supported and whistle-blowers must be protected.

Solving problems is to tackle root causes, he said.  “We need to give the value of water greater weight in the economic, social and environmental choices,” he said.  He stressed that water management and adapting to climate change are highly important for the Netherlands, referring to the Agenda for Water Action they presented earlier in 2018.  Welcoming the new Global Commission on Adaptation, he noted that it should provide a platform to delve deeper into the links between climate resilience, financing and security, using an integrated approach.  The Paris Agreement and Sustainable Development Goal 13 set clear objectives, but water cuts across all 17 Goals, he said.  He stressed the need for international transparency, fair market mechanisms and a level playing field for all countries to be able to adapt to climate change.  Lastly, he reiterated that constructive multilateralism is the only way to make progress, and furthermore, he announced Netherlands’ candidacy for the Human Rights Council for the 2020 to 2022 term.