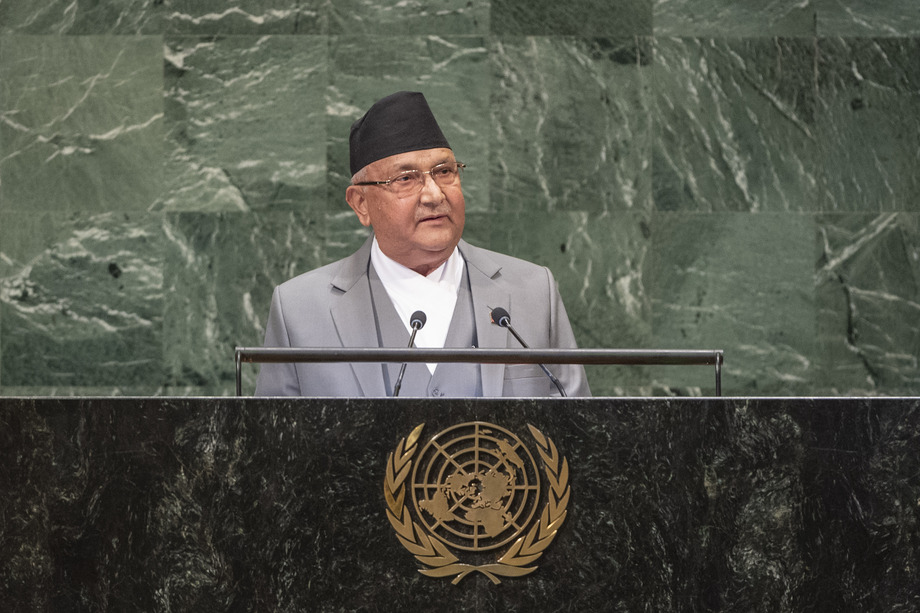 K. P. SHARMA OLI, Prime Minister of Nepal, said his country had undergone a historic political transformation since 2006, a home‑grown peace process transforming armed conflict, restructuring the State and making Nepali people truly sovereign.  Despite difficulties in the wake of devastating earthquakes, political leaders implemented a new constitution, with elections bringing women’s representation in elected bodies up to 41 per cent.  “We remain committed to bridging the gap of the remaining 9 per cent,” he added.  Nepal’s conflict transformation can serve as an inspiration for those longing for peace all over the world.

While Nepal’s foreign policy aims for “amity with all and enmity with none”, the world is at an important juncture facing many challenges including poverty, terrorism, climate change, food insecurity, forced displacement and intra‑State conflicts, he said.  In that context, people struggling for rights, liberty, freedom and justice, including in Syria, Yemen and Palestine, must be heard.

Noting that climate change burdens poorer, vulnerable countries like Nepal, where snow‑clad mountains, known as water towers of the world, are receding and the impact on mountain and small island countries presents an existential threat, he said a matching and robust response is required, including implementation of the entirety of the Paris Agreement.  While the frontiers of technology are ever expanding, he also saw a widening digital divide.  Least developed countries need easy access to affordable technology to create a level playing field.

Nepal reaffirms its support for general and complete disarmament of all weapons of mass destruction, welcoming recent efforts towards denuclearization of the Korean Peninsula and commending the beginning of the Kathmandu Process in the Asia‑Pacific region.  Hoping for the formal adoption of a Global Compact for Safe, Orderly and Regular Migration, he noted Nepal has hosted thousands of refugees for decades and said the international community must uphold the right of refugees to safely return home with full dignity.  Nepal has responded to every United Nations peacekeeping call “even at the shortest notice and without national caveats”.  Welcoming the Secretary‑General’s Action for Peacekeeping initiative, he condemned attacks on peacekeepers and the indignity of sexual exploitation and abuse.  However, Nepal’s experience shows that peacekeeping cannot do what politically negotiated settlements can.  Declaring a total, unflinching commitment to human rights, he also underscored the centrality of the United Nations as a multilateral forum, as global problems can only be overcome by global solutions.