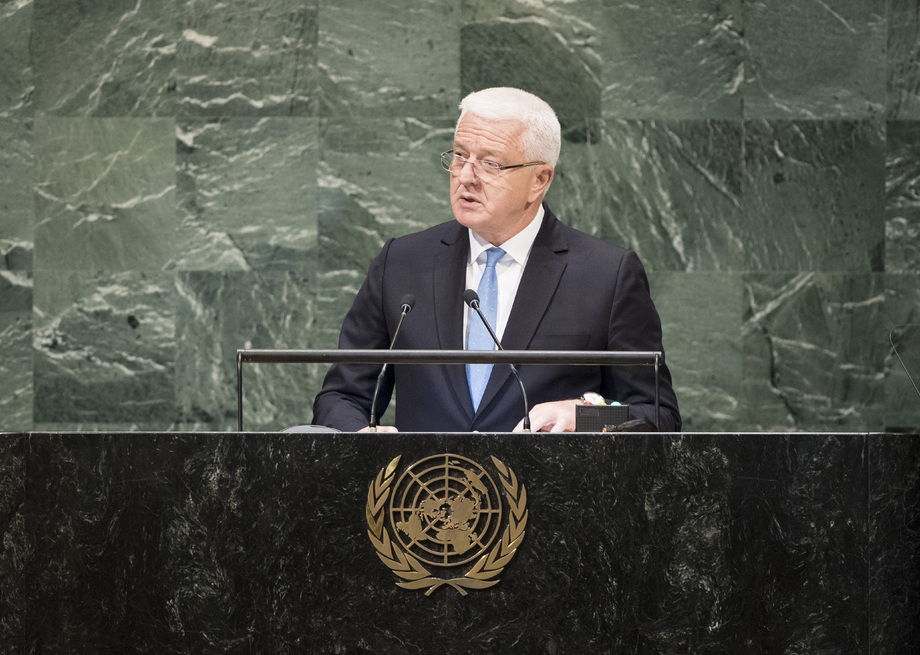 DUŠKO MARKOVIĆ, Prime Minister of Montenegro, unequivocally confirmed his Government’s commitment to joint action within the United Nations system and welcomed the choice of this year’s General Assembly debate — “Making the United Nations relevant to all people:  global leadership and shared responsibilities for peaceful, equitable and sustainable societies”.  Joint action is essential in responding to the catastrophic consequences of terrorism, violent extremism and climate change.  To address the many challenges facing the world, United Nations reform is necessary, he said, adding that the General Debate is of paramount importance to ensure confidence in the United Nations.

Montenegro is firmly committed to the implementation of the Sustainable Development Goals; a process he said complements the country’s European integration efforts.  Although it is responsible for a small share of global emissions, Montenegro is committed to implementing the Paris Agreement.  The international community often falls short in preventing crime and suffering.  The situations in Syria and Myanmar point to the relevance of preventive and timely action in avoiding conflict.  States have a moral responsibility to eradicate impunity for crimes committed.  Montenegro regrets the ongoing stalemate in the resolution of the Israeli‑Palestinian conflict and the deteriorating humanitarian situation in Gaza.  Violence resulting from conflicts in the Middle East must end immediately, he asserted, also calling for the strengthening of the United Nations prevention pillar.

Human rights violations pose a threat to democracy, the rule of law and are a step towards conflict, he said.  Seventy years since the adoption of the Universal Declaration of Human Rights, the world is witnessing an increase in grave rights violations.  He acknowledged the role of the Human Rights Council in preventing violations, also urging that body to run more effectively and efficiently.  Significant progress has been made at the national level in the promotion and protection of the rights of women and girls, children, and lesbian, gay, bisexual, transgender and intersex people.  Montenegro’s commitment to gender equality is reaffirmed by its chairmanship of the Executive Board of United Nations Entity for Gender Equality and the Empowerment of Women (UN-Women).

Pointing to rising humanitarian challenges, he said adoption of the Global Compact for Safe, Orderly and Regular Migration will contribute to better management of migration flows and will benefit States and migrants.  Montenegro is working to improve migration‑related regulations and admits migrants and refugees into the country in line with international standards.  In the 12 years since the restoration of its independence, Montenegro has made rapid progress in the State-building process based on democratic values.  He said that as a North Atlantic Treaty Organization (NATO) member, Montenegro is committed to issues of global security.  Montenegro is also a front‑runner for European Union membership and commits itself to combating crime and corruption.

He said the Western Balkans is now a better place to live than it was some 20 years ago, adding that the best future for the region is in membership to the European Union.  Montenegro continues to promote regional stability and welcomes the historic name‑change agreement between Greece and Macedonia.  Montenegro will continue to be a responsible partner to the United Nations and to contribute to tackling global challenges.  Montenegro has presented its candidacy for the upcoming Economic and Social Council, Human Rights Council and Security Council periods.