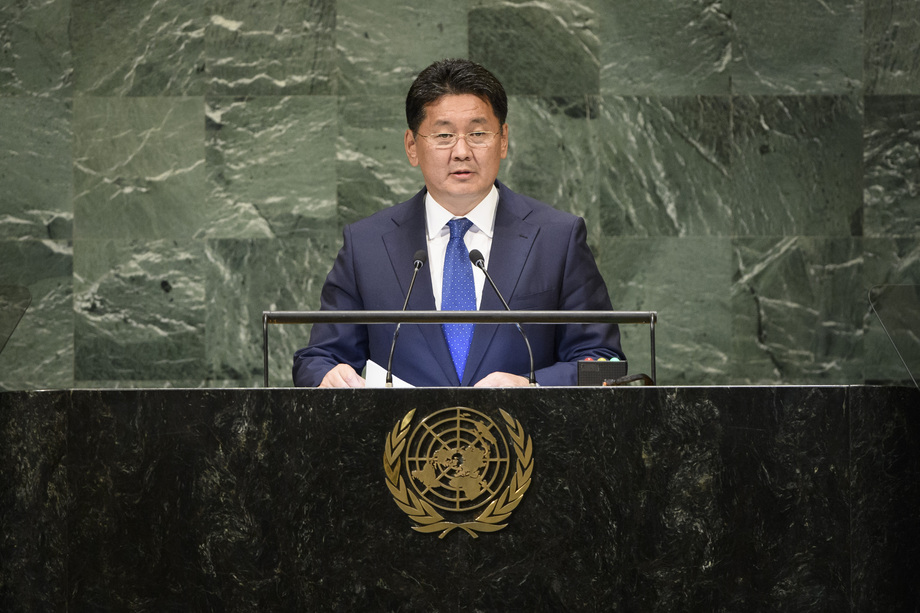 KHURELSUKH UKHNAA, Prime Minister of Mongolia, noted that today we are living in a flat, globalized, and interrelated world where our life is digitized, and life is greatly shaped by technological progress.  Despite these developments, we encounter conflicts, poverty, hunger and inequality.  In that vein, Mongolia supports reform initiatives in the peace architecture, aimed at ensuring stronger prevention and mediation.  Referring to the Stockholm International Peace Research Institute report, world military expenditure is estimated to have reached $1.7 trillion in 2017, the highest level since the cold war.  The armaments race is not declining, and the use of technological advancements in armed conflicts is making the circumstances more dangerous than ever, he noted, citing Mongolia’s initiatives proving its contributions to peace and security, including bringing hundreds of orphans from the Democratic People’s Republic of Korea to Mongolia after the Korean War.

Addressing security issues in North‑East Asia, he said it is a foreign policy priority as it directly impacts Mongolia’s security.  He welcomed the recent positive developments on the Korean Peninsula and said that his country has, since the 1980s, consistently pursued the policy of launching a dialogue mechanism in North‑East Asia.  The dialogue is now transforming into an open and inclusive mechanism gathering both Government officials and academia from all countries in the subregion.  Asia is one of the most disaster‑prone regions in the world.  Within this framework, the country put forward an initiative to establish the Northeast Asia Disaster Risk Reduction Platform in Mongolia.

Moving on to the seventieth anniversary of the Universal Declaration on Human Rights, he noted that Mongolia has made remarkable achievements in the field of promotion and protection of human rights, and that his country is currently on the Human Rights Council.  He noted everyone is entitled to a social and international order in accord with the rights and freedoms set forth in the New York Declaration for Refugees and Migrants.  Stressing the issue within his own country, he noted Mongolia is experiencing a high volume of internal and external migration due to unemployment and poverty.  This includes a large movement of citizens from the countryside to cities begun in the 1990s — and as of 2017, 45 per cent of the total population lives in the capital city of Ulaanbaatar.  This results in social ramifications such as poverty, unemployment, poor access to health‑care services and air pollution.

He said that citizens of Mongolia are highly educated, but the pupil‑classroom ratio in schools and in kindergarten has decreased together with the population density in rural areas; however, the case is opposite in the urban centres.  Thus, Mongolia is planning and implementing policies and programmes that address the challenges faced by the capital city by 2030.  This includes addressing a shortage of kindergartens, as well as 30 schools in suburbs functioning in three shifts.  He noted other issues such as air pollution, as well as the number of unemployed people in Ulaanbaatar, which accounts for one third of the national unemployment rate.

On climate change, he noted the daunting challenge for humanity that goes hand in hand with peace, security and development issues.  His country welcomes and supports the Secretary‑General’s timely initiative to convene a climate summit in September 2019.  He stressed that climate change most impacts the least developed countries, landlocked developing nations and small island developing States.  In that regard, he highlighted the initiative and leadership of Mongolia, as the International Think Tank for Landlocked Developing Countries has been established in Ulaanbaatar and operationalized in May.  The Think Tank represents 32 landlocked developing countries and will conduct policy research and implement projects to address common challenges.  Noting the issue of water that is being addressed this week, during the United Nations Climate Week, Mongolia’s delegation launched a documentary titled Blue Gold, which shows the devastating impact of climate change on the country.