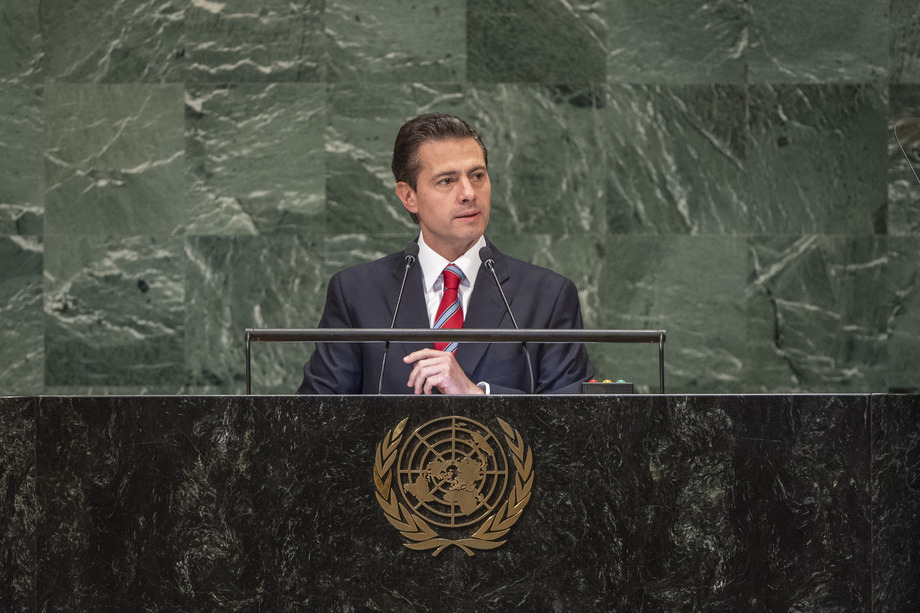 ENRIQUE PEÑA NIETO, President of Mexico, said his country, through an institutional architecture created to move forward on the 2030 Agenda, is promoting a form of sustainable development that benefits all.  The implementation of the Paris Agreement on climate change is a priority, he stated, and the international community has a moral obligation to not only implement it, but also comply with even more ambitious goals.

Mexico has also taken action towards solutions to the challenges of migration, he said, welcoming the progress made on the Global Compact for Safe, Orderly and Regular Migration.  Based on a new paradigm, Mexico has worked in the past two years to establish the Compact’s guiding principles:  the respect of human rights of all migrants, shared responsibility and the full respect of the sovereignty of States.  The adoption of this instrument in Marrakesh will provide Member States with a fundamental document for international management of migration.

Mexico has also renewed its contribution to peacekeeping operations in Africa, the Middle East and Latin America and the Caribbean, he said.  As well, it distinguished itself by working towards the full elimination of all weapons of mass destruction, including nuclear weapons.  He called on all Member States to sign and ratify the Treaty on the Prohibition of Nuclear Weapons without delay.  In addition, “the trafficking of illicit weapons, due to its gravity, is a scourge with which we must deal immediately”, he stressed.  The outcome of the 2016 special session of the General Assembly on the world drug problem will also be a watershed for the international drug control regime.  In that regard, there was a need to move from prohibition to effective regulation.

Acknowledging that Mexico still faces major human rights‑related problems, he noted that his country implemented specific policies and accepted international scrutiny in that regard.  The international community must continue to promote the respect of democratic principles as part of its work on human rights.  The breakage of democratic order in some parts of the Americas is a grave concern, and Mexico will work to ensure that peace, democracy and the respect of human rights are re-established in every corner of the continent, while fully respecting the principle of non‑intervention.  He also reiterated the call to put an end to the trade and financial embargo on Cuba, stressing that solutions to problems are found in dialogue and negotiation.  The lifting of this embargo will be positive for the entire region, he added.

Exclusionary nationalisms, protectionist practices, and the erosion of multilateralism promote various forms of exclusion, he noted.  Faced with these concerning trends, he reaffirmed the importance of cooperation, adding that “multilateralism is the best way to defend the sovereignty of States while contributing to the well‑being of the community of nations”.  Towards that end, dialogue, cooperation and an international rules‑based system are the best options to find fair, shared and lasting solutions to global problems.  Chiding those who choose exclusion and discord, he emphasized that the challenges facing the international community force Member States to remain faithful to the principles established in the United Nations Charter.