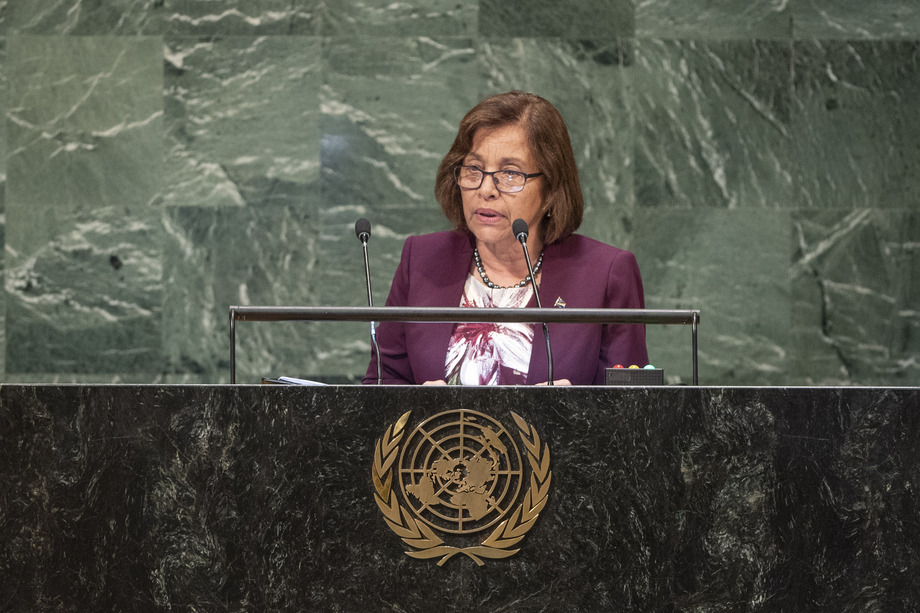 HILDA C. HEINE, President of the Marshall Islands, said that the United Nations serves as a common platform for every nation, especially for the vulnerable.  At present, nations are pulling in new directions, stretching the threads which hold us together.  It is imperative that Member States continue to unite behind an international rules‑based order which does not overlook the voices of the most vulnerable peoples.

Human rights are a universal ideal which all must aspire to and uphold, she said, noting that the Human Rights Council has the potential to lend transparency and dialogue.  “While we must take more time to connect global norms, the United Nations must never hesitate to stand up to actors who would seek to evade what everyone else might see as common decency,” she said, adding that from our own history the Marshall Islands knows the dire consequences which arise when the international community looks the other way because of political expediency.  Thus, the Marshall Islands has put forward its candidacy for the Human Rights Council for 2020‑2022.

Small nations have a unique role within the multilateral system, she said.  Affirming the threat of climate change, she noted that now we must spend time on advocacy, “time that we do not have”.  She affirmed the 2019 Secretary-General’s Climate Summit, which will provide an opportunity to put the Paris Agreement into motion.  She announced the Marshall Islands is transitioning to net zero emissions by 2050.  “In raising our ambition, I know we will not be alone,” she said, adding that climate change is the greatest security threat to our region.  The political will must extend to atoll nations like the Marshall Islands, whose very survival is at risk.

The United Nations Oceans Summit set the stage to ensure that oceans must no longer be in an isolated silo — but be an integral part of sustainable development and global commitment, she continued.  The Marshall Islands is more than 99 per cent ocean.  “It is our culture, our primary economic pathway and our identity,” she said.  Next week the Marshall Islands will host a relaunching of a regional initiative for an illegal-, unreported- and unregulated-free Pacific to eradicate illegal fishing from the region.

Underlining her role as the first woman Head of State in the independent Pacific islands region, she said it is vital that the United Nations accelerate efforts to ensure that all women, especially the youngest, have a rightful role at all levels of decision-making.

Noting the need to adapt and change, she said that especially included the Security Council.  In addition, decolonization and human rights are both important issues in the Pacific islands region and she affirmed the position of the Pacific Island Forum leaders in the constructive engagement by its members with Indonesia with respect to elections and human rights in West Papua.