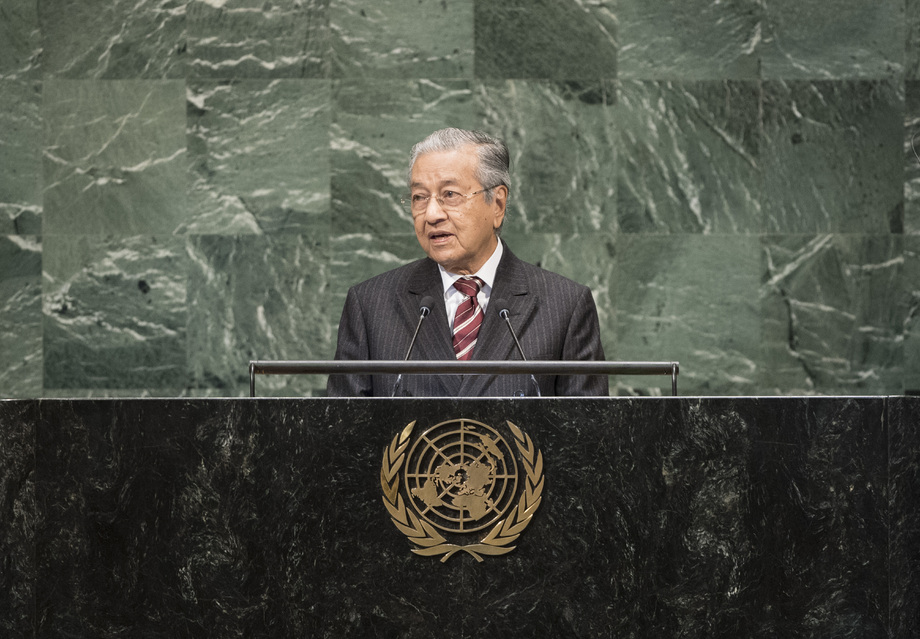 MAHATHIR MOHAMAD, Prime Minister of Malaysia, said a new Malaysia emerged in May when its citizens voted to change their Government, which had been in power since independence.  That new Malaysia will firmly espouse the principles underpinning the United Nations, he said, adding that it is in that context that it will ratify all remaining United Nations human rights instruments.  Doing so will not be easy, given the country’s ethnic, religious, cultural and linguistic diversity, but time and space will be given to all to deliberate and decide freely.

He said the world is in a worse state economically, socially and politically since he last spoke before the Assembly in 2003, with the international community feeling the pain of a trade war between its two most powerful economies and terrorist activity everywhere.  Pointing to the situation in the Middle East, he said the only way to fight terrorism is to remove its root causes.  “Let the Palestinians return to reclaim their land.  Let there be a State of Palestine,” he said.

Fear of nuclear war has maintained peace in Europe and North America for more than 70 years, but conflict elsewhere has paid handsome dividends to arms traders and manufacturers, he continued.  “The arms business is now the biggest business in the world,” profiting shamelessly from death and destruction.  Turning to the situation in Rakhine state in Myanmar, he said he believed in the non‑interference in the internal affairs of nations, but questioned if independence gave a country the right to massacre its own people.

He went on to say that free trade means no protection for small countries and their infant industries, with the simple products of the poor subjected to clever barriers that prevent their sale to rich markets.  The boycott of Malaysian palm oil is depriving hundreds of thousands of people from jobs and a decent life, he pointed out, emphasizing that 48 per cent of Malaysia remains virgin jungle and that from 2020 every drop of Malaysian palm oil will be certified sustainable under a new national sustainable palm oil standard.

Turning to the Security Council, he underlined that “five countries on the basis of their victories over 70 years ago cannot claim to have a right to hold the world to ransom forever.”  Nor can they preach democracy and regime change when they deny democracy in the United Nations.  He renewed his suggestion that a Council veto require a minimum of two dissenting votes from permanent members and three from three non‑permanent members.  The Assembly would then uphold the veto with a simple majority.  Asserting that a world without the United Nations would be a disaster, he said the Organization must get sufficient funding.  “No one should threaten it with financial deprivation,” he stated.