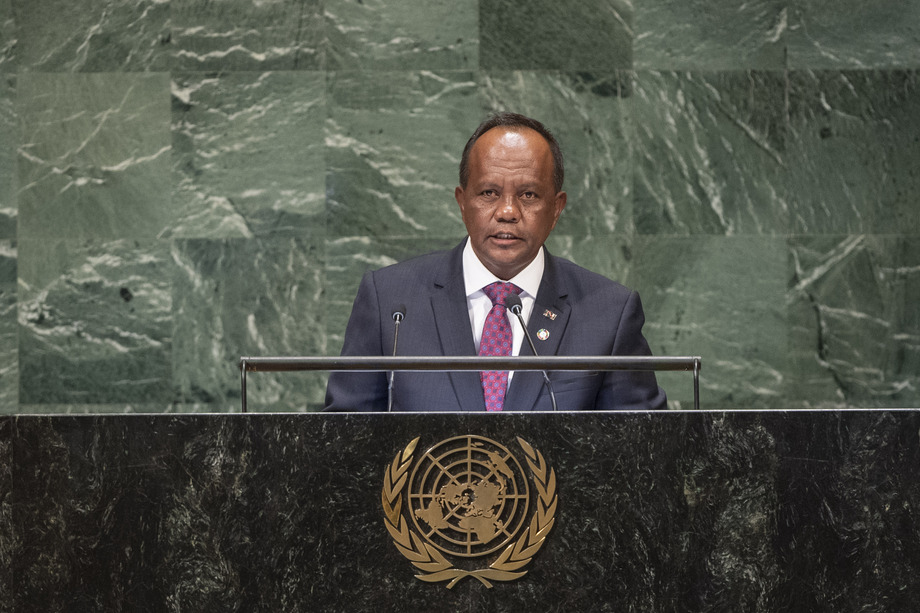 RIVO RAKOTOVAO, President ad interim of Madagascar, underscored the great changes in the world:  multi-polarity and economic globalization with dizzying levels of computerization as well as abundant diversity.  “Much progress has been made,” he said, but added that there are a lack of confidence and insecurity, exacerbated by inequality and planetary challenges such as climate change, poverty and disease.  Everyone was a witness to the humanitarian crises in the world, as the world is changing and evolving.  The United Nations must adapt to ensure coherence in responses and approaches.  Achieving the Sustainable Development Goals requires combating inequality and promoting social inequality.  In addition, it is essential to protect the environment, which must be a priority if the international community wants to eliminate extreme poverty and ensure the viability of the planet.

He noted the role of women and girls, and the appalling conditions they are facing all over the world, including as victims of gender‑based violence.  “Women and girls are central to the future of humanity,” he said, adding that to improve the fate of humanity, everyone must care about the fate of women.  Continuing, he called for action to improve health care around the world too, particularly in Africa.  He pointed to problems in Madagascar especially in obtaining specific investment commitments and support from partners.  He noted that a universal health care system has been implemented and the country is now free of polio.

The country’s 2030 Agenda ensures inclusive sustainable development, but adequate financial resources are vital to galvanize the support it needs, he said.  Underscoring that a world of peace and prosperity must have consensual actions that are decided by everyone, he noted that the Malagasy people have been interested in partnerships to protect the country’s democratic achievements, which are essential to its stability.  The country is at a crossroads.  He quoted Kofi Annan, who said:  “No nation is born democratic,” and added that Madagascar has the determination to build democracy.  He noted accomplishments of the last four years, including macroeconomic balance, as well as increased confidence between national and international stakeholders.

He pointed to more positive steps, such as the use of clean energy – and the building of hydro and solar plants, which will reduce electricity costs by 2020 despite oil price increases.  Exports are doing well and in the social sector, health care has improved.  He noted other sectors’ improvements:  tourism, infrastructure, airports, and structural reform to counter corruption — all of which would advance stability and growth.  Lastly, he reiterated the call to promote a better future to which all nations aspire, and paid tribute to former Secretary‑General Kofi Annan, defender of multilateralism, who sought to build a stronger Organization on behalf of humanity.