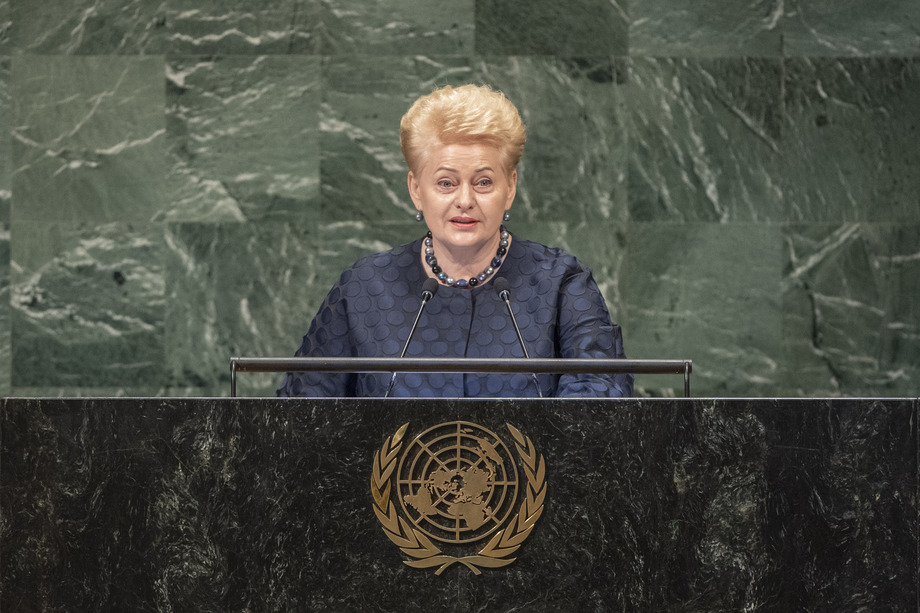 DALIA GRYBAUSKAITÉ, President of Lithuania, noted that this year the world marks the centenary of the end of the First World War, a war that caused the fall of empires and gave small nations in Europe the chance to achieve independence.  Following the end of the War, multilateral institutions were created to safeguard political independence and territorial integrity.  However, the failure of those institutions plunged the world into the Second World War.

People today think multilateral institutions, including the United Nations, are strong enough to take a stand against aggression and the disregard of international rules, she said.  However, reality sometimes tells a different story.  The world is increasingly fractured, and institutions fail to shelter those they represent from economic storms.

The Security Council has been unable to play a meaningful role in resolving almost every major conflict of the past decade, she pointed out, attributing the failure to the inability of States to rise above their national interests and the obstructive use of veto powers.  Organizations created to abolish weapons of mass destruction are toothless against dictators who develop nuclear arms and use chemical weapons on civilians.

The tides are changing for the global economy, she said, adding that the World Trade Organization is facing paralysis.  Rising trade tensions may wipe away progress made towards achieving sustainable development and poverty reduction.  Multilateral institutions are not perfect; they can be wasteful and unaccountable.  It is up to Member States to address those shortcomings.

More so, States cannot reject globalization, she stressed.  Fighting it will only increase poverty.  However, globalization has a dark side which must be confronted by challenging exclusion, inequality and falling labour standards.  The voices of nationalism and division cannot be allowed to claim victory over dialogue and cooperation.  There is no alternative to cooperation, she said, emphasizing that Member States have the power and resources to enable the United Nations to stand up for peace, freedom and equality.