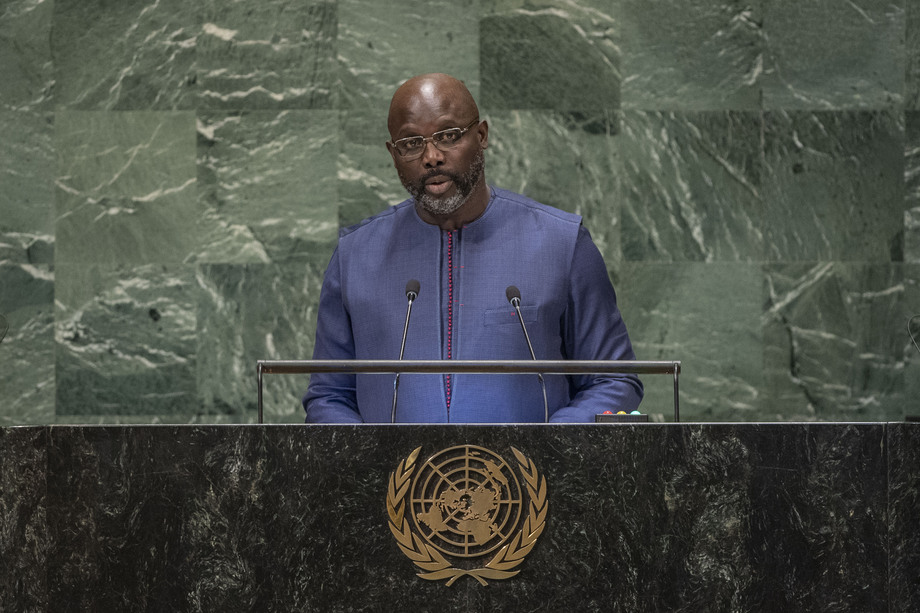 GEORGE MANNEH WEAH, President of Liberia, hailed Ms. Espinosa’s successful election, noting that she is one of four women to hold the Presidency of the General Assembly.  Paying tribute to the late Kofi Annan, he said Africa lost one of its most illustrious sons and the world one of its most outstanding diplomats.  On his country’s newly democratically elected Government, he stressed that Liberians voted for “a Change for Hope” and a paradigm shift towards youthful leadership, change and transformation as a first in 73 years.

Adopting the Pro-Poor Agenda for Development and Prosperity, he pointed out that this will benefit not just the poor, but all Liberians.  It is a policy framework for alleviating poverty and reducing the marginalization of the most vulnerable while being conducive for the middle and upper-income Liberians to grow and prosper.  Intending to build a harmonious society, he called on friends, partners and private investors to support the efforts of the Pro-Poor Agenda in giving power to the people, promoting economic diversification, protecting sustainable peace and encouraging good governance.

He deplored the vulnerability of the youth in his country who lack access to high quality education and employment opportunities, adding that he plans to make them productive citizens by providing adequate educational facilities at high school and college levels.  He also recalled the Technical Vocational Education and Training programmes for the youth left behind due to the disastrous civil crisis.  To connect cities and towns and to power Liberia’s economy, he highlighted much needed investments in roads, energy and ports and called therefore for funding and technical expertise.

Because agriculture is another key priority in alleviating poverty, focus is now on improving self-sufficiency in food production and self-employment, he continued.  Liberia also intends to attract labour-intensive light manufacturing by implementing a new Special Economic Zone law.  He noted that due to the results of the 2014 Ebola Epidemic costing thousands of Liberians’ and health workers’ lives, he plans to better organize the healthcare delivery system to improve the wellbeing of his people.

Concerning national security and peace, he stressed that his Government is in charge of its own security due to the recent withdrawal of the United Nations Peacekeeping Mission in Liberia (UNMIL).  He thanked the Mission for its sacrifices in securing and maintaining peace.  He also expressed his deep gratitude to Farid Zarif of Afghanistan, Special Representative for Liberia and the last Head of UNMIL.  Liberia is a peacekeeping success story, he said, pointing to the many peaceful years following years of war that were guided by the 2003 Accra Comprehensive Peace Agreement.  “We must never take peace for granted or forget the long shadows of conflicts on people’s lives,” he underlined, pointing to the National Peace Dialogues to be initiated.