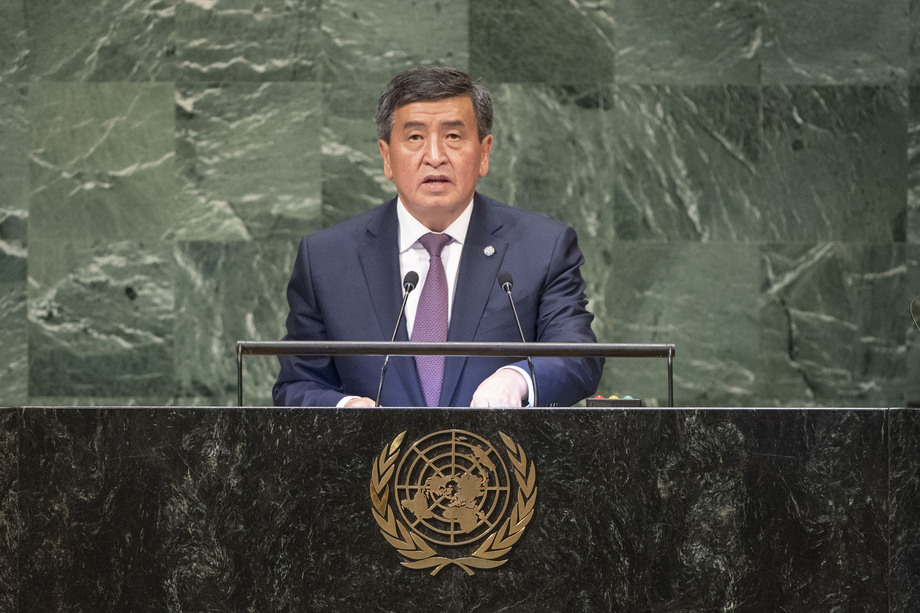 SOORONBAI JEENBEKOV, President of Kyrgyzstan, noted that the global political, economic and environmental situation is changing rapidly, and regionalism in world politics is growing.  Our global task is to prevent the spread of terrorism and extremism to all countries and preserve an ecological balance.  “These issues are a matter of concern of everyone, especially small countries with open economies,” he said.

Outlining issues of national, regional and global importance, he said that the peaceful transfer of power in the fall of 2017 laid a solid foundation for his country’s progressive democratic development; this allows for the setting of ambitious goals.  He noted the priority of fighting corruption, and the focus on political modernization, economic development, judicial reform and reorganization of law enforcement agencies.

Strengthening cooperation between the countries of Central Asia is the most important factor for ensuring security in the region and the world, he stated.  In addition, he noted the issue of water use and the need for new approaches that aimed at sustainable development.  Furthermore, noting that Kyrgyzstan is at the crossroads of drug trafficking, he said that measures taken by the international community to combat that scourge have been insufficient.

Noting the significant threat that climate change poses, he noted its contribution to natural disasters in the mountainous regions of his country, a main theme of the fourth World Mountain Forum in Kyrgyzstan.  In addition, another issue is the radioactive industry of the Soviet era — uranium tailings.  Thus, Kyrgyzstan held several international conferences.

The global problems of today require joint work, he said, as well as new international mechanisms that are adequate to modern threats.  The Organization needs change to deal with present realities.  Drawing attention to the problems that small States face in the United Nations, Kyrgyzstan put forward its candidacy for a non‑permanent seat on the Security Council for 2027‑2028.  He noted Kyrgyzstan’s initiative to hold the World Nomad Games, and ended by quoting writer and humanist Chingiz Aitmatov:  “There is no greater wealth for a man than to live together and peacefully.”