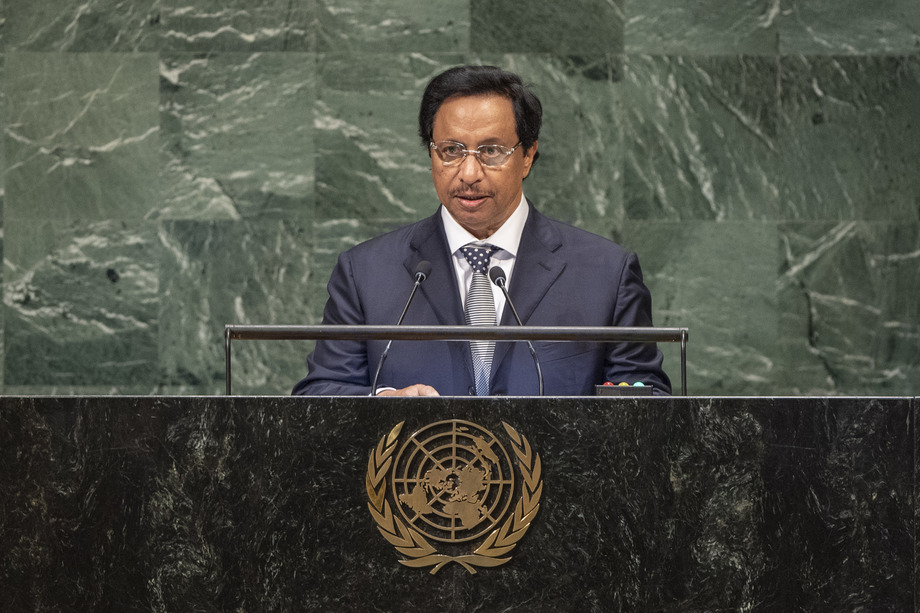 JABER AL-MUBARAK AL-HAMAD AL SABAH, Prime Minister of Kuwait, emphasized his support for the reform of the United Nations as envisioned by the Secretary-General.  He recalled the original motivation for creating the United Nations to protect present and future generations from the scourge of war, pointing to the urgent need to bolster the Organization’s ability to respond to current challenges like violence, extremism, terrorism, proliferation of mass destruction weapons, violation of human rights and the consequences of climate change, evolving into a safe haven and the guarantor of world peace and stability.  On the importance of reforming the Security Council, he said it must be capable to shoulder today’s challenges and reflect international reality, adding that there should be a permanent seat on the organ for an Arab Member State.  He noted that the agenda of Kuwait’s non-permanent membership to the Council was not limited by any cultural, ethnic, political or geographical considerations, stressing that he aimed at going beyond the routine of the participation in the work of the organ.

On the Palestinian question as the oldest issue of the Security Council, he pointed to resolution 56 (1948) when the organ dealt with the issue for the first time, adding that Israel still persists in its intransigence, rejecting and ignoring resolutions of international legitimacy, and continues to expand the establishment of illegal settlements on occupied Palestinian territories.  He recalled the latest resolution 2334 (2016) calling for the cessation of all Israeli illegal settlements.  He noted the detention of thousands of Palestinians and Israel’s military aggressions in the Gaza Strip while not observing the protection of civilians in armed conflicts.

In addition, he deplored the fact that the Syrian crisis continues due to the inability of the international community to find a solution.  More than 400,000 Syrians are dead, and there are more than 12 million refugees and displaced persons, he said.  On the importance of direct dialogue with all partners to achieve a peaceful settlement, he reaffirmed Kuwait’s position on rejecting any military solution for the Syrian crisis.  On Yemen, he said that the Houthi group’s threat to stability and peace in the region by launching ballistic missiles to Saudi Arabia has endangered the safety of free navigation through the Strait of Bab-Al-Mandab and the Red Sea.  He reaffirmed his country’s commitment to respect Yemen’s sovereignty, independence and territorial integrity under the legitimate authority of that country.

Turning to terrorism and violent extremism in the Middle East, he pointed to his country’s material and moral support in the fight against the Islamic State in Iraq and the Levant (ISIL).  He reaffirmed Kuwait’s assistance to Iraq to fulfil its outstanding obligations pursuant to relevant Security Council resolutions with the aim to aid Iraq to regain its role and position in the region and internationally.  Addressing the issue of the Rohyinga Muslim minority of Myanmar, he reaffirmed Kuwait’s continued efforts in cooperation with all parties concerned in guaranteeing a safe, voluntary and dignified return and bringing to account those responsible for the crimes committed against them.  Mentioning Iran, he called for strengthening the rules of good neighbourliness and non-interference in internal affairs of the State according to the United Nations Charter.

On the Sustainable Development Goals and the Paris Agreement, he noted his nation’s support for eradicating poverty; ensuring equal rights to dignity, education, health, and political participation; the empowerment of youth and women; and the implementation of measures to achieve its goals.  He pointed to a futuristic national vision for “a new Kuwait” to be accomplished by 2035, aiming to transform it into a regional centre and a financial, commercial, cultural and institutional pioneer.