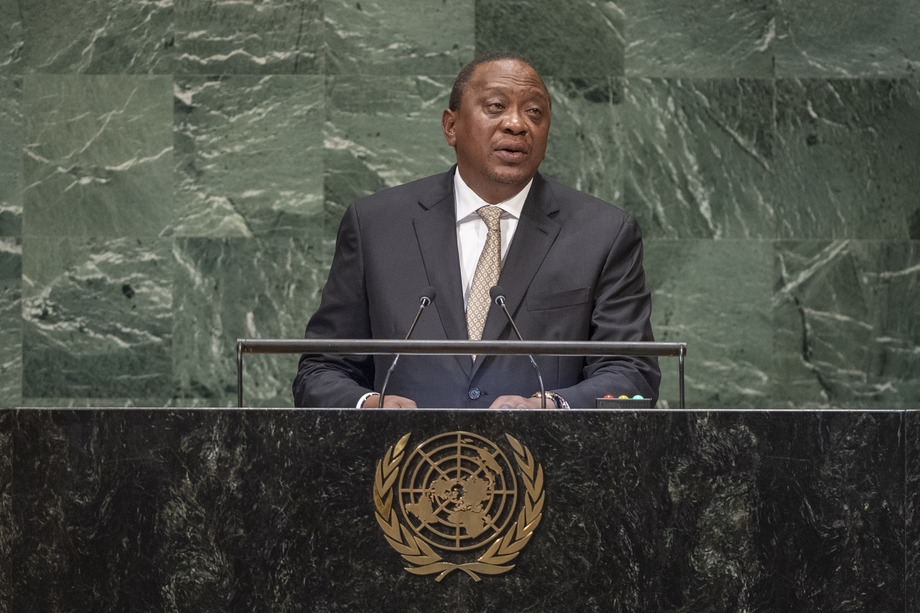 UHURU KENYATTA, President of Kenya, expressed strong support for the General Assembly’s intention to better enable the United Nations Human Settlement Programme (UN-Habitat) and the United Nations Environment Programme (UNEP) to fulfil their global mandates.  However, he said there was a need for broader reforms.  In almost every part of the world, there is a growing trust gap between citizens and their governing institutions, due to growing awareness of the scourge of corruption and wastage of public resources.

Pointing beyond individual corruption, he said major corporations are misrepresenting earnings to deny Governments revenues needed for investment in public goods.  The corrupt dealings of cartels and oligopolies pillaging Africa’s resources “have over several decades been clothed in the garments of legality”, leading to “popular theorizing of Africa’s resource curse” he said.

Continuing, he said that citizens all over the world are more aware that a globalized financial and legal system enables the illegal conduct of corrupt individuals, with Africa probably enduring the most suffering.  Saying evidence increasingly marked Africa as a net exporter of capital through illicit outflows, he cited conservative estimates that the outflow ranged between $1.2 and $1.4 trillion between 1980 and 2009, roughly equal to the continent’s current gross domestic product (GDP) and “surpassing by far the money it received from outside over the same period”.  Illicit capital powers a global corrupt network used by drug cartels and even terrorist organizations, driving a loss of trust in national, regional and global governing institutions, and thus enabling populists and extremists who thrive in chronic instability.

Turning to international conflict, he praised the regional efforts of the African Union Mission in Somalia (AMISOM), which has degraded one of Al-Qaida’s most ambitious affiliates.  “Kenya has been part of this journey from the start”, he said, as in Nairobi, the Kenyan people had provided material and moral support to negotiate a transitional federal State into existence.  The Kenyan people have lost lives and property in pursuit of peace in Somalia, and the job is not yet done.  With military success over Al-Shabaab a necessity for other political and economic solutions, he called for international support commensurate with the threat scenario.  “What the international community is doing with Somalia is not good enough,” he stated.  In South Sudan, he said that forging stability and peace requires a commitment to work closely with South Sudanese parties in the wake of a revitalized peace agreement.  Kenya is proud of its role there and calls on the international community to redouble efforts to end the suffering of its people, as “in building peace there are no silver bullets”.

Globally, he said multilateralism is under severe strain, threatening the system of trade and security established after the Second World War under the aegis of the United Nations.  Calling for bold solutions, he said the global community must fight impunity and corruption, fraud and abuse of public trust.  Kenya has reached out to partners in Switzerland and the United Kingdom to counter transfers of illegal proceeds to their banking and financial systems, but bilateral agreements must come with determined reforms.  Saying that one such reform must occur in the Security Council, he called for two permanent seats for Africa to counter the “historical injustice” of its under-representation in the non-permanent Member category.  “Global decision-making needs more of Africa, if the world is to respond wisely to the demographic and economic shifts under way,” he said.