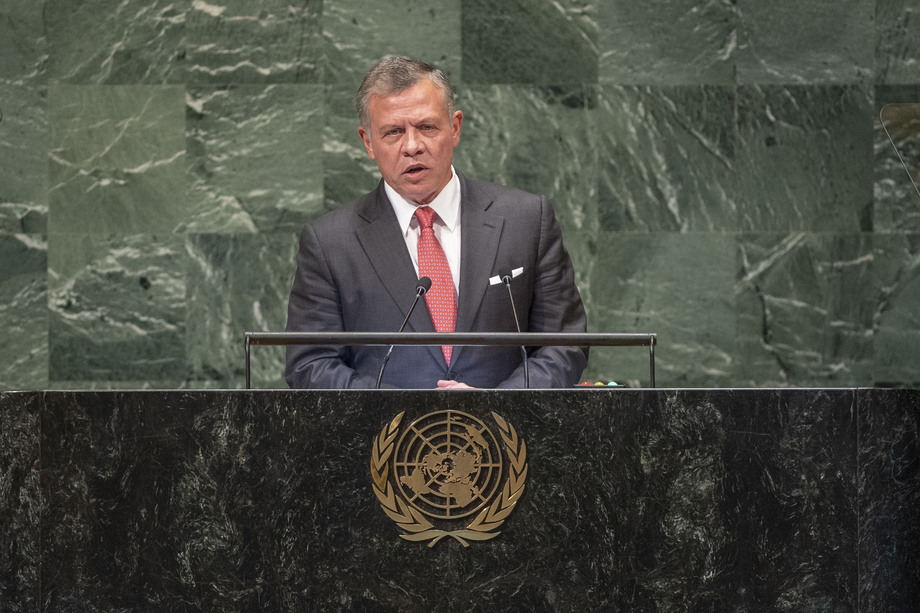 ABDULLAH II IBN AL HUSSEIN, King of Jordan, stressed the importance of collective action in ending the serious crises in the Middle East, especially the long denial of a Palestinian State.  The Palestinian people have equal rights to a future of peace, dignity and hope.  Only a two‑State solution based on international law and relevant United Nations resolutions can meet the needs of both sides:  a viable, independent, sovereign Palestinian State on the 1967 borders with East Jerusalem as its capital, and a secure Israel, fully part of its own region, recognized by Arab and Muslim States around the world.  Describing a one-State solution as “ugly and undemocratic,” he said, “it is by no means an alternative to a two‑State peace settlement”.

Rejecting unilateral measures, he stressed the need to fully fund the United Nations Relief and Works Agency for Palestine Refugees in the Near East (UNRWA) and other vital efforts in support of families and young people.  “It would be a terrible mistake to abandon youth to the forces of radicalism and despair,” he said.  Turning to the need to safeguard the heritage and peace of Jerusalem, he noted that Jordan carries out a duty as the Hashemite Custodianship of Islamic and Christian holy sites in Jerusalem.

Jordan will also continue to support all multilateral efforts to help Syria achieve a political solution, based on the Geneva process, and United Nations Security Council resolution 2254 (2015), he said.  An effective global response to terror also requires continued collective action, which pairs security measures with strong initiatives to support inclusion and hope.  There is a need, online or offline, to counter ideologies of hatred, including Islamophobia.  Jordanians have led efforts to unite the world in mutual respect and understanding.

On the global refugee crisis, he said that his country has carried a “massive, disproportionate” burden as a host.  “Our people have opened their homes, schools, public services, and hospitals.  We have shared our country’s scarce resources, our food and energy, our precious water,” he reported.  This has held back economic growth and job creation.  While Jordanians have borne the refugee burden in full accord with their long humanitarian traditions, he stressed that burden is a shared global responsibility.

“The world cannot address the refugee crisis, or any global crisis, unless we work tougher to support those who are doing the right thing for the future we all share,” he stated.  Peace and prosperity demand constant and collective action.  He called for all Member States to give the world’s people, especially youth, confidence in global justice, hope for new opportunities and international laws, and agreements that everyone can rely on.