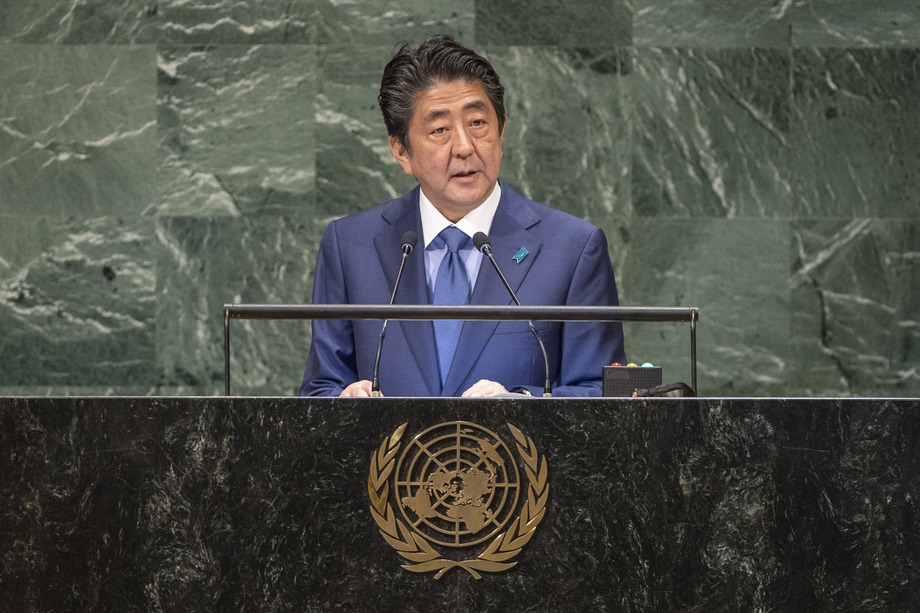 SHINZŌ ABE, Prime Minister of Japan, pledging to do his utmost to strengthen a free-trade system and clear the post-war structure from North-East Asia, highlighted the remarkable growth his own country has enjoyed.  Indeed, the free-trade system has enabled many Asian countries to foster a middle-class because of a rules-based, free and open international economic system.  Japan has now taken on a mission of imparting to the world the benefits of trade, he said, underlining achievements such as a European Union partnership agreement, a commitment to the WTO and new trade talks with the United States.  Sharing examples of the latter, he noted that Japan’s direct investment has created 856,000 jobs in the United States.

Japan also stands ready to work with other nations and regions, he continued, spotlighting talks with the President of the Russian Federation to overcome a 70-year-old deadlock between the two countries.  Upon the conclusion of a Japanese-Russian peace treaty, the peace and prosperity of East Asia will be strengthened, he added.  Recalling that one year ago he had, before the General Assembly, urged the Democratic People’s Republic of Korea to resolve its abductions, nuclear and missile issues, he said now the country is at a crossroads.  The Democratic People’s Republic of Korea has both untapped natural resources and a labour force whose productivity can be greatly enhanced, he said, adding that “we will be unstinting in our assistance to unleash the potential” the country holds and will also bring about the return of all Japanese abductees.  To resolve the abductions issue, he will “break the shell of mutual distrust” with Pyongyang and “get off to a new start”, meeting face to face with Chairman Kim Jong-Un, he said, noting that no date for a summit has been set yet.

Turning to other developments in the region, he said mutual Japan-China visits at the leaders’ level began in 2018 and will continue, providing a point of stability for the region.  When the confrontational structure is cleared out of North-East Asia, the maritime corridor running from the Arctic Ocean to the Sea of Japan through the Pacific Ocean to the Indian Ocean will become increasingly important.  Expressing hope for stability and peace in those areas through the rule of law and a rules-based order backed by solid institutions, he said those principles are the basis of a free and open Indo-Pacific strategy.

Turning to other plans, he said the Government will launch a programme that will bring teachers from Gaza to Japan.  In addition, Japan will host in 2019 the Group of 20 Summit, the Tokyo International Conference on African Development and the Rugby World Cup.  When Japan and its people fix their gaze on the future, the country increases in vitality, he said, noting that new generations will work as flag bearers for the United Nations spirit.  However, citing the lack of progress on Security Council reform, he said the Organization’s significance in the twenty-first century world is already being questioned.  As such, he will work with the Secretary-General to push forward reform of the Council and of the United Nations.