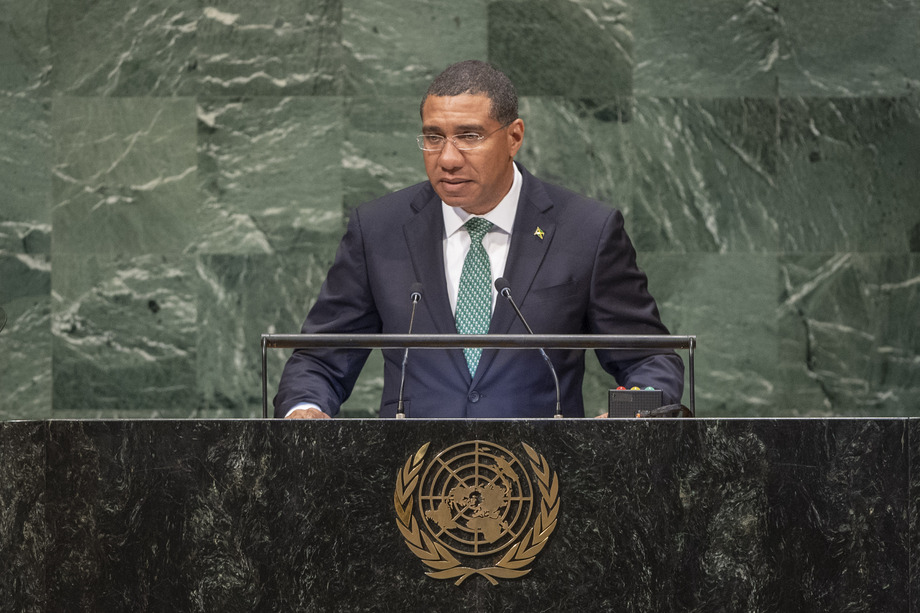 ANDREW HOLNESS, Prime Minister of Jamaica, said it is imperative to make the United Nations relevant to all people.  Since the global economic crisis 10 years ago, global growth has improved and unemployment has declined.  But small developing economies have enjoyed a more uneven growth.  Jamaica’s own quest for inclusive and economic growth has encountered challenges, including those linked to climate change and intense weather events.  Regardless of the difficulties, his country is pursuing policies that will secure economic growth such as structural reform of its economy, reduction of its debt profile, transformation of the energy sector and increased social support for the vulnerable population.  Ultimately, economic independence will secure Jamaica’s resilience.

Jamaica continues to strengthen traditional partnerships and build new ones, he noted, including the invitation to represent the Caribbean Community (CARICOM) at outreach summits of the Group of Seven (G7) and BRICS (Brazil, Russian Federation, India, China and South Africa).  Influential country alliances have the opportunity to work alongside international development partners to address problems that face weaker economies.  Concerted action will be required to find effective solutions within a fair, multilateral system.

Jamaica and its CARICOM partners do not have the luxury of engaging in a philosophical debate on climate change, he went on to say.  For five months every year, the Caribbean region lives in fear of super storms.  The hurricane devastation wreaked on Dominica could be compared to a nuclear event.  The global cost of climate-related disasters was $320 billion last year.  Against that background, his country looks forward to the climate change summit to be convened by the Secretary-General in 2019, he said.

To achieve the Sustainable Development Goals, various sources of additional funding must be tapped, he said, highlighting the importance of mobilizing private sector funding.  Many small island developing States are deemed to have graduated to middle‑income status based on their gross domestic product (GDP).  Yet many remain highly indebted and vulnerable.  He commended the work of the Economic Commission for Latin America and the Caribbean (ECLAC) and called for international financial institutions to address the problem known as the “middle‑income countries”.  His Government will continue to work with partners such as Canada to provide a platform where countries can engage directly with actors in the private sector.

Jamaica is especially committed to combating the illicit traffic and trade of small arms and light weapons and has made significant national institutional changes and policy enhancements in that effort, he continued.  Implementation of the Sustainable Development Goals must be people‑centred and embargoes and financial barriers must not become tools to prevent people from their right to development.  Societies are not sustainable without healthy citizens, he said, pointing out that Jamaica is severely impacted by non‑communicable diseases but is implementing measures to reverse that trend.