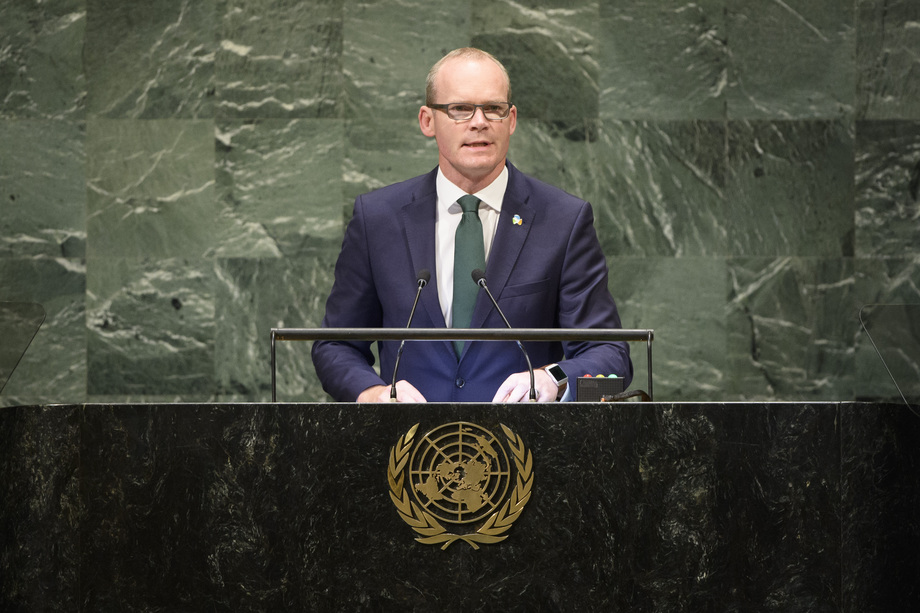 SIMON COVENEY, Deputy Prime Minister of Ireland, said his country was honoured to have been asked to co‑facilitate the consultative process to produce the political declaration adopted at the Nelson Mandela Peace Summit and encouraged Member States to use that event as a motivating force to renew efforts to work for a culture of peace, tolerance and human dignity.  He said that given Ireland’s large diaspora population, the Irish know well that today’s challenges do not respect geographic boundaries, and are guided by a sense of shared responsibility.

The United Nations has played a major part in Ireland’s development, he said.  “We not only support a fair rules‑based order in international affairs — we exist, survive and prosper because of it.”  He called for global outward‑looking leadership which galvanizes global support through strength of argument, fearing that without such leadership the powerful will dominate and decisions will no longer be based on the strength of argument.  While Ireland does not wish for any diminution in the role played by the leading actors of the United Nations, he said the Organization’s foundations will crumble without inclusivity and welcomed the Secretary‑General’s steps on reform.  However, reforms should go beyond the managerial and structural level, he said, also calling to increase the size of the Security Council to better represent all areas of the world.  In particular, the unjust under‑representation of Africa needs to be addressed, he said, also advocating for a designated role for small island developing States given the climate change threat they face.  Political reform of the Council will lead to a greater sense of participation and ownership among Member States, he said.

He went on to say that progress in international criminal justice has provided a shift towards global accountability, recalling that Ireland ratified the Amendments to the Rome Statute of the International Criminal Court on the crime of aggression earlier this month and lodged the instrument of ratification with the Secretary‑General on 27 September.  He emphasized the need to remain steadfast in the pursuit of the elimination of nuclear weapons and called on the Democratic People’s Republic of Korea to abide by its obligations.  Ireland remains committed to United Nations peacekeeping with large Irish contributions to the United Nations Interim Force in Lebanon (UNIFIL) and is the highest per capita European Union contributor of peacekeeping troops in general.

Regarding the migration crisis, a huge majority of those displaced are being sheltered in already vulnerable countries, he said, acknowledging the burden on many States and in particular Bangladesh, and pledging his country’s support to refugees and host communities.  While acknowledging the current situation in the Middle East serves neither the Israelis nor the Palestinians, the burden of occupation is the heavier one, he said, citing continued settlement construction as an existential threat to the two‑State solution.  The situation in Gaza is untenable, he continued, calling for an end to the blockade there and pledging his country’s continued support of UNRWA.  He greatly regretted the recent cuts to its funding by the United States and urged those in power to reconsider their decisions as those cuts will only be seen as collective punishment, thus empowering radicals and destabilizing moderates.  In closing, he reiterated Ireland’s candidacy for a seat on the Security Council in the 2020 elections, saying that his country will act as bridge‑builders there, committed to hearing all voices with no partisan agenda.