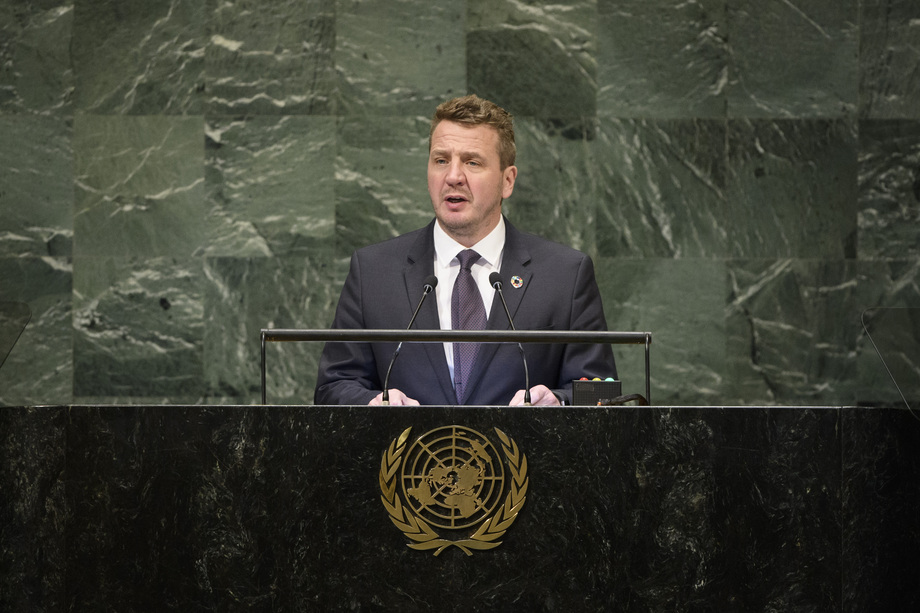 GUDLAUGUR THÓR THÓRDARSON, Minister for Foreign Affairs of Iceland, saying that gender equality is a “master key” to unlocking sustainable development in all countries in line with 2030 Agenda, noted that his nation is one of the most gender equal countries in the world.

Addressing climate change, he noted:  “In the Arctic, Iceland sits in the front row witnessing disappearing ice caps and changing ecology.”  Saying the issue is fast becoming the most serious challenge to global peace, security and development, he highlighted the new Government of Iceland climate strategy, aiming to make the country carbon neutral by 2040.  Already, all electricity and heating are produced from renewable resources, and the plan aims to phase out fossil fuels and increase afforestation and restoration of wetlands.  Stating Iceland is firmly committed to the 2030 Agenda and its “inclusive and bottom-up approach to development”, he cited a national foreign policy with healthy oceans and sustainable fisheries at its core.  The United Nations Convention on the Law of the Sea provides a tried and tested framework, with Iceland’s own experience showing the regional approach to conservation is most effective.  He stated that Iceland has developed and is ready to share expertise in marine resource management, having trained almost 5,000 experts from 100 countries in a programme that also embraces gender equality, green energy and land restoration.  In medicine, he highlighted the neglected issue of neurological disorders, affecting 1 billion people worldwide.  The Nordic countries are working towards a common research database on neurological disorders.

Expressing pride that Iceland in 2018 took a seat on the Human Rights Council, a first for his country, while celebrating the country’s centenary of sovereignty, he stated that upholding human rights is in the interest of every State.  Iceland’s priorities are promoting the rights of women, children, lesbian, gay, bisexual, transgender and intersex persons, and the connection between climate change and human rights.  He noted that Iceland’s history underlines that a nation’s prosperity and well-being is largely dependent on protecting and promoting citizens’ rights.

Saying the Security Council should be reformed and not held hostage by narrow national interests, he pointed to difficult and unresolved global conflicts.  Stating the Syrian war has left the country in ruins with more than 400,000 dead and almost half the population displaced, he said a political solution is required.  The Yemen situation is fast becoming the worst humanitarian crisis in the world.  The issue of Western Sahara is unresolved, as is the Israeli-Palestinian conflict, and he described the disregard for the sovereignty and territorial integrity of Ukraine and Georgia “a wound in the European security architecture”.  Referring to horrors committed against the Rohingya population of Myanmar, he called for those responsible to be held to account, including before the International Criminal Court.  These conflicts become even more disconcerting when considering that almost 250 million children are affected, and along with the correlative refugee crisis, the greatest since the Second World War, call for a coordinated response.