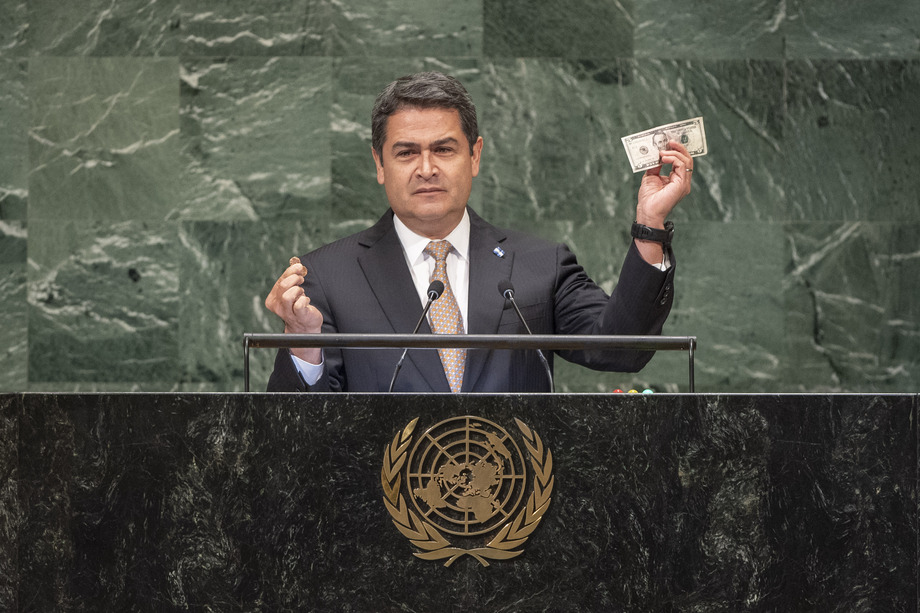 JUAN ORLANDO HERNÁNDEZ ALVARADO (Honduras) said his country’s Congress voted on 25 September to appoint a commission to modernize the national election system with a view to creating new transparent technology.  He expressed frustration that sometimes there can be a lack of determination and courage to translate myriad global ideas into simple action on the ground.  “If we want to live in a harmonious system, then we must uphold the pillars of this Organization,” he said, warning of constant international forces that want to meddle in the internal affairs of sovereign States.  “It is necessary to protect rule of law in our countries,” he stressed.

“The world is clamoring for great reforms and deep-seated transformation … and it is up to this generation of leaders to meet the many demands,” he continued.  Despite being very vulnerable to climate change, Honduras has taken steps to combat the scourge.  Excessive bureaucracy has impeded funding, however, he added, emphasizing that it is up to the Organization to discuss and decide how those funds be used.  “Every minute those funds stay in the bank vaults is another minute that banks get rich and people suffer,” he said.  Honduras and the wider Central America region have for years been the epicenter of a migrant crisis.  Millions of migrants are treated as subhuman.

“They receive ill treatment as they tackle the route of terror towards the United States,” he said.  They fall victim to human and drug traffickers and gangs.  Honduras still awaits the family reunification of 129 children who have been separated from their parents.  Nations of the General Assembly can never forget their commitment to human rights, he said, urging the senior officials of the United Nations and Member States to do more to protect the rights of children.

The goal of Honduras and its neighbouring countries is to lay the foundation of a Central American Customs Union, he said.  Such a model will facilitate trade based on justice and equality.  He expressed concern for the unfairness with which coffee producers have been treated.  He asked:  “How many of you drink a cup of coffee in the morning or during the day?”  There is a great probability that you are participating in an enormous injustice causing extreme poverty.  A cup of coffee in New York costs about $5 and yet a coffee producer in Honduras doesn’t even get two cents from that.  “Is that an injustice or not?”  In Honduras alone, there are 90,000 coffee producers.  “Let us organize ourselves because apparently no one is looking out for the interests of small coffee producers,” he said.

In Honduras, there are also non-State armed groups confronting good citizens and the Government, he continued, adding that armed groups are constantly trying to undermine the rule of law.  They violate the rights of thousands of Hondurans.  The situation in Honduras should sound the alarm for Member States to unite to defend the rule of law.  “What this is about is the fundamental right to life, freedom and democracy,” he continued, requesting the Assembly to produce a resolution to recognize gangs as non-State actors that cause instability and undermine the rule of law.  Honduras is working to create a climate of peace, but that is just not enough.  He called on the conscience of all world leaders to protect democracies and human rights from non-State armed groups and gangs.