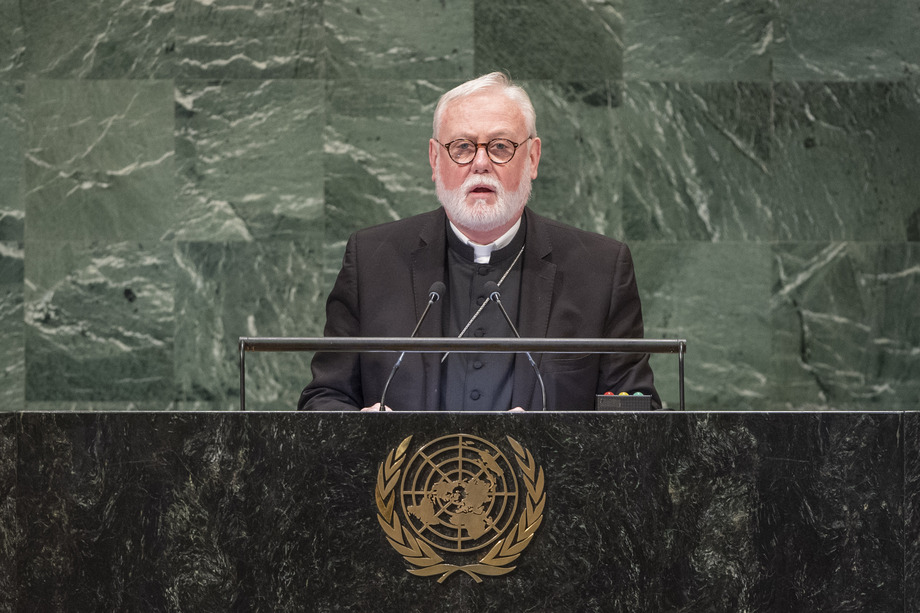 ARCHBISHOP PAUL RICHARD GALLAGHER, Secretary of Relations with States for the Holy See, noted that despite positive developments in human rights, 1 in 10 children still suffer child labour, 1 in 3 people currently in detention are held without trial, 29 per cent of children under age 5 have no birth registration and 250 million women are married before the age of 15.  Tens of millions of others are ensnared in forms of modern slavery.  It is scandalous to see human rights still violated seven decades after adoption of the Universal Declaration of Human Rights, he stated.  It is especially concerning that a current within human rights discourse refuses to recognize the inherent value and dignity of human life at every stage of its beginning, development and end.

Turning to global flashpoints, he urged the international community to address the situation in Syria.  Calling for a two‑State solution so Palestinians and Israelis can live in peace within internationally recognized borders, he said the Holy See is also concerned by the instability in Nicaragua and Venezuela, and the conflicts in Ukraine, Libya and the Central African Republic.  However, recent developments in South Sudan and the Democratic Republic of the Congo, as well as between Ethiopia and Eritrea are positive signs towards building peaceful, democratic societies.  “Peace requires forgiveness,” he said.  Terrorism is not an outgrowth of religion properly understood, but of spiritual poverty, as “killing others in the name of God offends God Himself”.

Affirming the equal rights of men and women, he noted that Pope Francis insists the world urgently needs a revolution of tenderness.  Women have shown a special capacity for recognizing, affirming, nurturing and defending the inherent dignity of others.  Yet, women’s indispensable role is often undervalued and that, in poor and developing countries, they lack access to basic medical assistance in childbirth, suffer sexual exploitation and forced marriage.  Stating that the family is the greatest treasure for a country and future generations, the Catholic Church is committed not only to promoting the protection of children but to creating safe environments for them in its own institutions to address “the heinous scourge of sexual abuse and violence” against them.