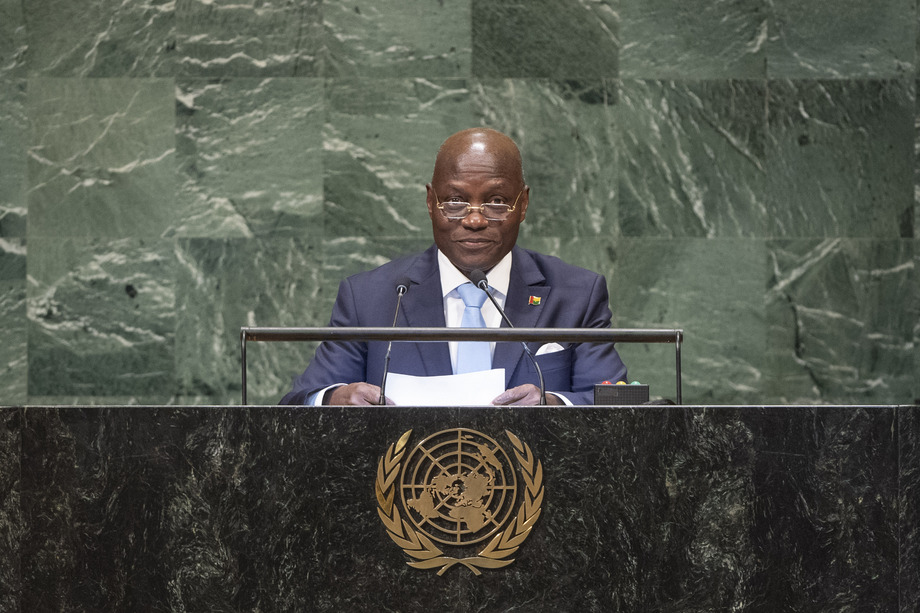 JOSÉ MÁRIO VAZ, President of Guinea‑Bissau, expressed concern that many conflicts persist around the world and many people continue to suffer the destruction of war.  Millions die or are forced to abandon their homes in search of asylum, he said, emphasizing that “we cannot remain indifferent to so much suffering and despair”.  Spotlighting the plight of those seeking asylum in Europe as well as those in Palestine, Yemen and Syria — which continues to be a major source of concern for the international community — he said that on the African continent, internal tensions caused by terrorist groups especially in the Sahel region spread fear among populations and prevent Governments from focusing on development issues.

Noting that climate change is increasingly causing more frequent droughts and floods in many parts of the globe, he said many island countries face the risk of disappearance due to rising sea levels.  “These challenges require from all of us efforts, new attitudes and more responsible behaviours,” he stressed, calling on nations to rigorously meet their commitments undertaken as part of the Paris Agreement.  Spotlighting the obligations and principles enshrined in the United Nations Charter — especially those of the peaceful resolution of disputes, the non‑interference in the internal affairs of other countries and multilateralism as the cornerstone of building international peace and security — he also went on to underline the interdependence of countries in today’s world.

“One country’s national policies may gravely affect all other countries,” he continued, adding:  “This demands shared responsibility.”  In that regard, he underlined the importance of reforming the Security Council in order to ensure better representation of the African continent, thereby enhancing the legitimacy of that principal organ of the United Nations.  Recalling that Guinea‑Bissau, alongside leaders of the Economic Community of West African States (ECOWAS), arrived in 2017 at an agreement to overcome its political and constitutional impasse, he outlined some of the ECOWAS recommendations including:  The appointment of a consensus Prime Minister; the formation of a Government of inclusion; the reopening of the National People’s Assembly; and the election of members of a National Electoral Commission.

“Recent political, social and economic events bear witness that Bissau‑Guinean people and armed forces […] said no to instability and embarked on a path of peace and development,” he said.  Noting that the country is on track to hold elections on 18 November and citing other positive developments, he appealed for the lifting of sanctions imposed on some of Guinea‑Bissau’s armed forces officials.  “We must join forces in order to better manage globalization, eradicate poverty and hunger, combat major endemic diseases, as well as guarantee education and potable water for all” in order to implement the Sustainable Development Goals by 2030, he said.